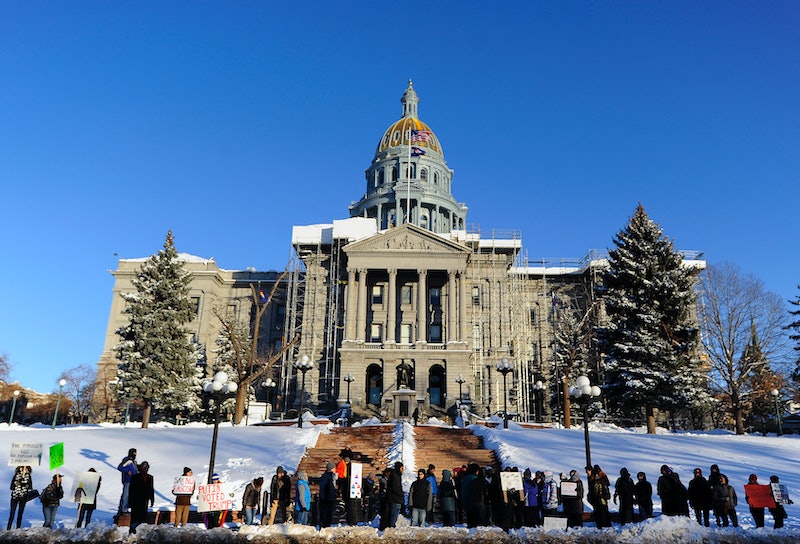 On Monday, 538 electoral college members are meeting to make the 2016 presidential election results official, but protests are taking place across the country in the hopes of denying Donald Trump the 45th presidency of the United States. Despite Jill Stein's ambitious recount campaign, Trump's many conflicts of interest, and the consensus between the CIA and FBI that Russia helped influence the election in Trump's favor, faithless electors may be the last line of defense against a Trump presidency.

So far, only one GOP elector has come out to say he will definitely not be voting for Trump, with some estimating at least 19 more will flip their votes as well. Even so, 37 Republican electors will have to do so in order for there to be a real challenge to Trump's presidency. It's with this knowledge in mind that protestors are gathering outside of statehouses throughout the U.S. to convince electors to cast their ballots to align with the popular vote rather than the electoral one.

And though by many estimates the odds are against them, the protestors demonstrating today show that hope is still alive that Trump can be denied his spot in the White House. Folks are taking to Twitter to share photos of anti-Trump electoral college protests happening in their home states.

While protests are occurring in red and blue states alike, the most critical may be those occurring in red states with many electors such as Texas, Florida, Pennsylvania, and Ohio. These demonstrations are a last ditch effort to reach out to electors, who have been inundated with letters and emails about their votes since Election Day. And with the stakes so high, some electors have reported being the targets of harassment and even smear campaigns.

While some "faithless electors" can legally vote for whichever candidate they want, others are bound by law to vote for the candidate that won their state on election day. And in the highly unlikely case that neither candidate reaches 270 electoral votes today, the decision will be left up to the U.S. House of Representatives. The debate over how effective today's many protests are will no doubt continue until after the last electoral vote is counted. Still, the efforts of those demonstrating are reminders that not all hope is lost in the fight to have the results of the election more closely match the votes cast by millions of American citizens.