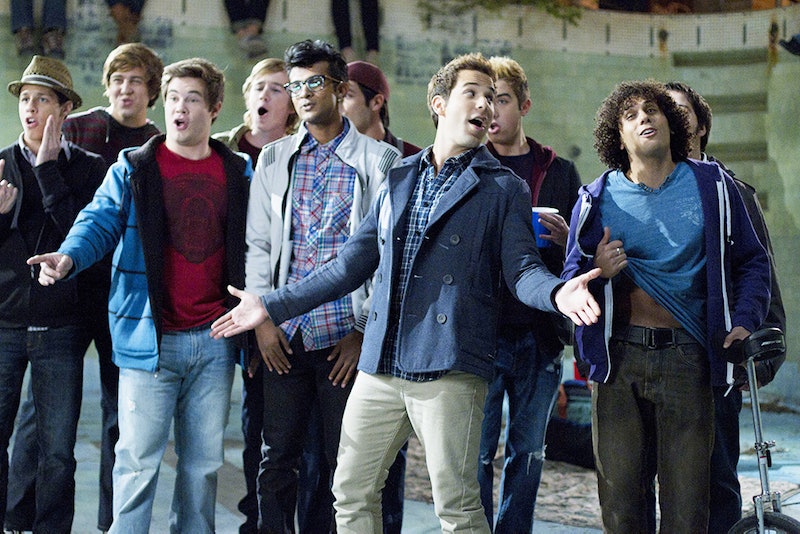 Well, it looks like Beca's Barden boyfriend is departing from your favorite (and only) a capella-themed franchise: Skylar Astin won't be returning to Pitch Perfect 3, which he confirmed on his official Twitter account Thursday. "Yes. As of now, the Trebles and I won't be in the third Pitch Perfect movie," he wrote. "They seem to be taking the story in a different direction." Now, you can queue up a flurry of emotions, because nixing Jesse, the Treblemakers — and very likely Adam DeVine and his delightful insanity — will be a huge loss for the franchise. But, on the other hand, we might have something to gain by nixing the Barden Boys.

Now, post-sadness, your second insta-reaction might be along the lines of casual complacency: everyone's graduated. With the exception of Anna Camp's Aubrey, who had long flown the coop for camp, the first class of Barden Bellas moved on at the end of Pitch Perfect 2, leaving the legacy to carry on through Hailee Steinfeld's Emily. Message received, the Barden baton has been passed. We can't all stay seniors forever (although, if you're Chloe, you'll definitely try your damndest).

However, there are going to be some familiar faces returning, including Rebel Wilson, Brittany Snow, and, yes, Anna Kendrick. And that maybe warrants an eyebrow raise, having Beca operate without her film beau. Realistically, few of us are lucky enough to end up with our college boyfriend (or... have a college boyfriend), but this doesn't mean that the two will be broken up in the film necessarily. Depending on how large Kendrick's role will be, his absence can be waved off with a throwaway line or not even touched at all. Point is, though, he could've tacked along with Kendrick's cameo.

But what's especially intriguing is the choice to dismantle the Treblemakers. Getting rid of that direct on-campus competition is an interesting new twist, because you take away all that illicit aca-fraternization... and dismantle the romantic B-plot that distracts from so many female-fronted films. Pitch Perfect 3, as a result, could place more focus back on the female dynamics within the film series.

Perhaps a new all-female a cappella group forms from the ashes of the Treblemakers, reviving that back-and-forth conflict of "are the Bellas old-fashioned and all-washed up? How will they reinvent their brand and win?" This time, however, we examine female-on-female relationships instead of stacking the Bellas against the boys (or, like, Germany).

That is a big "maybe" of a plotline, but, as much as the Treblemakers and the soundtrack-loving Jesse will be missed, taking them out of the equation definitely opens some new doors for the Bellas. In any case, Pitch Perfect 3 doesn't come out until December 22, 2017, so we have plenty of time to learn where this new premise is going to go.