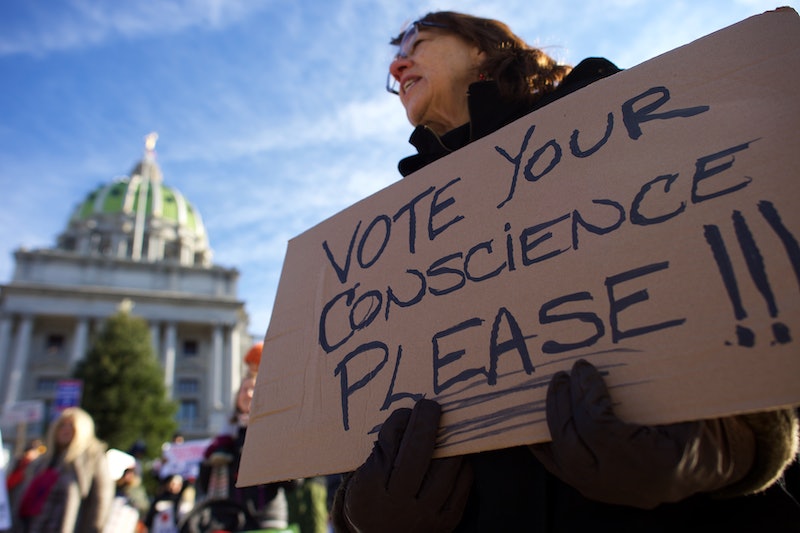 Merriam-Webster recently announced that the word of 2016 is "surreal" — definition searches for the word were high throughout the year, but spiked with Donald Trump's election win, according to POLITICO. As the Electoral College members meet Monday, it seems that the Hamilton Electors and Jill Stein's recount efforts in their own surreal — and, might I add, perverse way — only seem to help Trump's case for legitimacy. Efforts to block Trump from the White House may have ultimately strengthened him.

Now, part of the reason these two anti-Trump electoral efforts backfired is for the obvious reason that they have failed in what they set out to do — actually get Republican electors to turn against Trump and push for three state recounts. But the larger concern is that in failing to achieve their electoral goals, they have fed into the ever-important Trump team narrative that Democrats are merely "sore losers." Worse, these anti-Trump efforts may obscure some very legitimate concerns about Russian interference in the election.

As I write this, the almost entirely Democratic group of Hamilton Electors are at the bitter end of their effort to convince Republicans members of the Electoral College to cast their ballots for someone who is not Trump. While the Hamilton Electors earned a fair bit of attention, thus far, they have only appeared to convince one Republican, Texas elector Christopher Suprun, to join their effort. Suprun wrote a column, published in The Hill on Monday, saying he will vote for Ohio Gov. John Kasich.

Unfortunately for Suprun and the Hamilton Electors, Kasich has made it clear he does not want electors voting for him. By the accounts at the time of writing, it appears that the Hamilton Electors' movement did more to hurt Hillary Clinton's electoral vote count than Trump's. As NPR reported, "more electors tried to defect from Hillary Clinton Monday than Trump, by a count of eight to two, as of Monday afternoon."

The Hamilton Electors are fizzling more than a week after the Stein recount effort sighed its last breath. Trump's presidential election win had barely set in and drifted beyond the "surreal" phase when Green party presidential candidate Jill Stein launched her campaign to have votes recounted in three critical states: Pennsylvania, Wisconsin, and Michigan. Stein was quickly making national headlines and on nearly ever cable news show available, bringing in $7.3 million for the recounts, doubling what she had been able to fundraise for her own presidential campaign. Ultimately, Stein's recount efforts didn't make it off the ground in Pennsylvania, was halted in Michigan, and resulted in no significant change in Wisconsin.

But there may be longer-term damage from Steins' recount push. While the right was predictably critical of this effort, many on the left were as well. In GQ, Jay Willis wrote "The Liberal Case Against Donating to Jill Stein's Hail Mary Recount" and adeptly noted the problem with the cost and attention given to Stein's campaign may have more negative effects than simply not getting Clinton into the White House:

Clinging to unexpected results as evidence of illegal vote manipulation is the stuff of the tinfoil-hat crowd, and does not justify sinking millions of dollars into a fast-tracked recount fueled more by wishful thinking than by data.

Willis added later on in the piece that "this harebrained recount could foment further division and undermine the groundwork" of Obama trying to create a stable transition.

I would add that another unfortunate underside is that the recount, coupled with the Hamilton Electors, have made it easier for Trump to paint his critics as "sore losers" who are determined to waste time and money to keep him from the White House. In doing so, these two unsuccessful efforts to stop Trump may have made it easier to dismiss legitimate concerns about the electoral process as mere sour grapes.

Now, all efforts to examine Trump's presidential win can be far more easily cast by the president-elect and his team as petty, futile attempts of Democrats to avoid defeat (yes, even though Stein is certainly not a Democrat). These failed anti-Trump efforts have especially bad timing considering there are some very legitimate concerns about his presidential win: the CIA concluded Russia tampered with the election with the aim of a Trump victory — and it was reported that the FBI agreed late last week.

Last week, a group of electors demanded a briefing on the probe into Russian efforts to hack the election for Trump. In an open letter, they wrote:

We further require a briefing on all investigative findings, as these matters directly impact the core factors in our deliberations of whether Mr. Trump is fit to serve as President of the United States.

Unfortunately, it appears all the easier for Trump and his surrogates to swat away these more legitimate concerns about the integrity of his victory and our elections.

In fact, Kellyanne Conway, a senior adviser to Trump, said on CBS' Face the Nation on Sunday, "The entire nonsense about the electors trying to use the Russian hacking issue to change the election results is really unfortunate ... I think that actually undermines our democracy more than any other conversation that we're having right now."

I sincerely worry that it is far easier now for Trump and co. to deflect some very serious issues about not just the legitimacy of his win, but more importantly, the security of our elections in the future. Hamilton Electors and Jill Stein have once again proved that the road to hell is paved with good intentions.