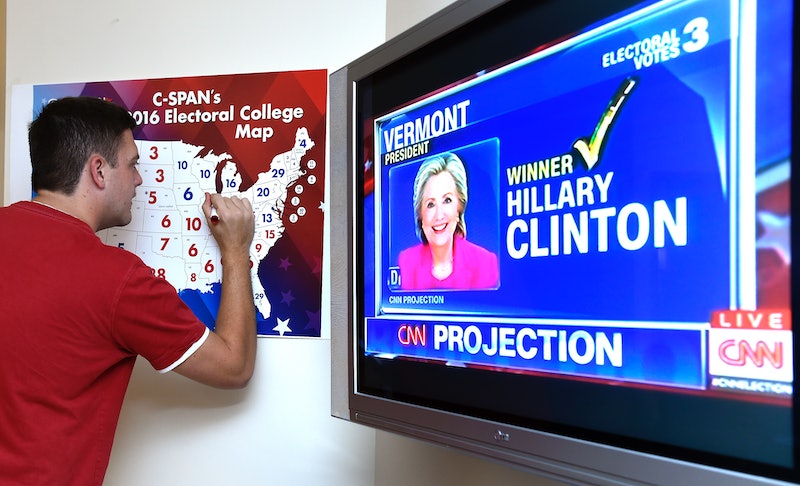 Despite numerous pleas to the contrary, the 538 electors meeting in their various states on Monday will probably vote in Donald Trump as president, as expected. But with Trump losing the popular vote of the American people by a nearly unprecedented 2.1 percent, according to the Cook Political Report, there is renewed talk about ending the Electoral College. This is the second of the past five elections that have been won by a candidate who lost the popular vote, and due to trends about how voters align with the two parties based on urban and rural splits, this could become even more common in coming years.

There is a plan to end the Electoral College. The National Popular Vote Compact is a proposal in numerous state governments which would guarantee their states' electoral votes go to the winner of the popular vote. But it only takes effect if enough states pass the compact to equal 270 electoral votes. Currently, 11 states have passed the compact, equaling 165 electoral votes. So nothing happens yet.

If Electoral College foes are serious, though, there's a change they could make to the compact that would neuter the college's power immediately. They could get California, one of the 11 states that passed the compact, to put it into place without the reciprocity from the others. Put the 55 electoral votes of the country's largest state in play, but only if a candidate wins the rest of the country's popular vote as well.

This would mean that the single biggest prize in the Electoral College would be the popular vote. And since California is the state with the largest proportion of that vote (10.4 percent in 2016), it would actually increase the importance of candidates campaigning there. It would be immensely hard for a candidate to win the popular vote without campaigning in California if their opponent does. Not only did the state give Hillary Clinton her highest vote total (8.8 million), it even gave Trump his second-highest (4.5 million, just behind Texas).

Considering how much many of Trump's supporters have tried to act like California shouldn't count at all, this would be a powerful move in favor of the state's importance in American democracy.

A change like this could screw with the way elections are run. Candidates of both parties would start to care not only about who wins a state, but by how much they win it. Other states with large populations that never get visits — Texas, Illinois, New York — would likely matter more as well. By screwing up the incentives for fighting exclusively for swing states, it would also mess with the whole system — other states would presumably start seriously considering following California.

Democrats (who in recent years have tended to be more opposed to the Electoral College) currently hold supermajorities in both of California's legislative houses and the governorship. They could presumably pass this without too much difficulty. But for that reason, they probably won't. California has been a reliable Democratic win since 1992, and the national Democratic party probably wouldn't want to jeopardize its most important state.

But if the popular vote movement really is about giving power to individual voters, not partisanship, this shouldn't matter. In all but one of the past 10 elections, California went with the popular vote winner. This change would make that official.