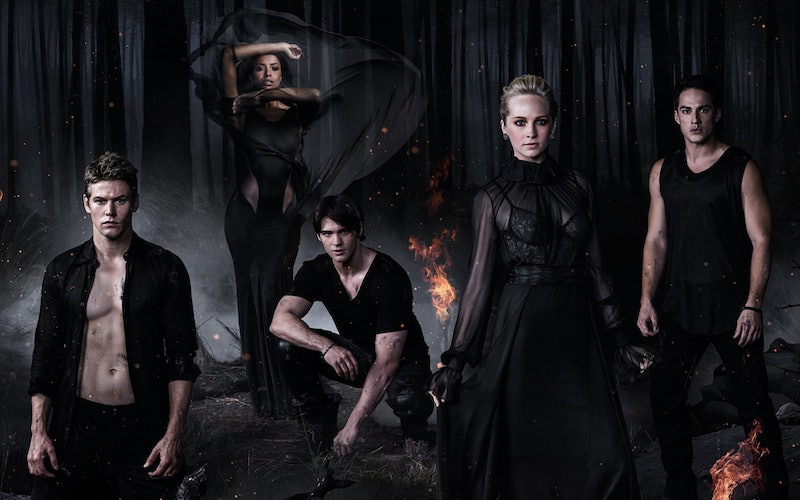 Am I the only one who thinks that The Vampire Diaries may be running out of characters to kill? Now that I think about it, most of the people on the show have already died at least once. I mean, Bonnie literally just came back from the dead — would this show really kill her off for good? (Answer: This is The Vampire Diaries, of course they would. I'm surprised that they haven't already.)

While we already know certain characters' fates are pretty much solid (we'd never watch the show without Damon or Stefan, and I guessssss Elena is kind of important, too...) there are certain cast members whom are most definitely not. So who do we think has the potential to go the way of Alaric, Aunt Jenna, and Katherine? Here are the characters whose deaths could make for a dramatic ending of Season 5.

Bonnie died last season, and, to be honest, I wasn't all that sad. I just found it a little too convenient that Bonnie's witch abilities happened to always save the day. That being said, Bonnie (and her cute new hair) has really stepped up her game this season, and I would be totally bummed to see her offed for good when she and Jeremy are so cute together. Plus, I'm loving her an the anchor to the other side, even though I still don't know what that really means.

Julie Plec, you better not hurt a single piece of perfect hair on Caroline's head. Caroline is the best. I repeat: Caroline. Is. The. Best. If they kill off this sassy blond vamp, I will start a Change.org petition immediately. She cannot die before Stefan realizes he's madly in love with her. That just wouldn't be fair to #TeamSteroline.

Matt's not a supernatural anything, which is why it would seem so easy for someone to kill this beautiful blue-eyed bartender. Matt's like The Vampire Diaries very own damsel-in-distress! (Err, dude-in-distress? What the guy equivalent of "damsel?" There really needs to be one.) But just because Matt is constantly in need of saving doesn't make him useless — he might just be the most well-adjusted, kind, and loyal human friend that anyone has ever had.

Jeremy died, like, for real. You can't kill this kid twice, especially when his character has been defined as more than just Elena's little brother. I'm still not 100% sure what his hunter status really means for the show and I'd like more time to figure that out.

Umm, actually, I'd be totally cool if Tyler went away forever.

More like this
Will Vampire In The Garden Get A Season 2? What To Know
By Kadin Burnett
Oops! The 'Stranger Things' Monopoly Game Has Spoilers For Season 4
By Alyssa Lapid
Netflix Just Revealed When 'Never Have I Ever' Seasons 3 Will Premiere
By Gretchen Smail and Alyssa Lapid
'Unforgotten's Brand New Character Joins At A Pivotal Moment For S5
By Bustle UK
Get Even More From Bustle — Sign Up For The Newsletter