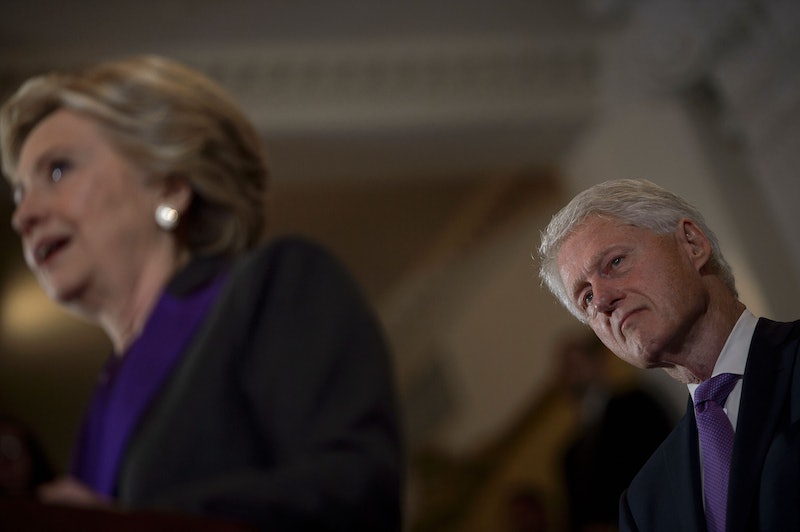 On Monday, along with his fellow Democratic electors in Albany, New York, Bill Clinton cast an electoral vote for his wife, Hillary Clinton. The former president of the United States cast the first vote for the state of New York. He was one of 29 electors whom Clinton earned with her popular vote victory in the Empire State.

Following the vote, Clinton spoke to reporters about the election. “You know, I’ve watched her work for two years,” he said. “I watched her battle through that bogus email deal, be vindicated at the end when Secretary Powell came out. She fought through that. She fought through everything. And she prevailed against it all but at the end we had the Russians and the FBI deal and she couldn’t prevail against them.” Clinton was referring to the ongoing problems his wife’s campaign had with hacks, leaked emails, and investigations by the FBI into her private server, all of which followed her throughout the election cycle.

“She did all that and still won by 2.8 million votes,” he added.

New York Gov. Andrew Cuomo, who served as chair for the state’s 2016 Electoral College, said there was “a bittersweetness” to the day’s events, and expressed thanks to Clinton for coming in person to cast his vote. “It couldn’t be easy for him to go through this proceeding, to see the Electoral College elect his wife but to know there’s a different outcome for the nation,” Cuomo said. “He was very gracious. He was very kind. He was in good spirits.”

The slates of electors that make up the Electoral College are meeting across the country on Monday to cast the votes that will officially elect Donald Trump as the 45th president of the United States. Trump won an Electoral College victory on Nov. 8, even though he lost the national popular vote by 2.8 million. It’s the second time in 16 years that the Republican nominee has won the presidency despite losing the popular vote.

As a result, many have been calling on the Electoral College to override the results of the election. The most cohesive group was arguably the so-called “Hamilton Electors." They relied on Alexander Hamilton’s vision of the Electoral College as a check against demagoguery. As of Monday afternoon, however, reports of defecting Electors were scarce. Faithless elector attempts in Colorado and Maine were effectively blocked, with one Hamilton elector, Michael Baca, being replaced in the former instance and David Bright switching his vote to Clinton in the latter.

Still, for Bill Clinton, despite the bittersweetness of the event, he said he was happy he got to cast his Electoral College vote for his wife. “I’ve never cast a vote I was prouder of,” the former president said.