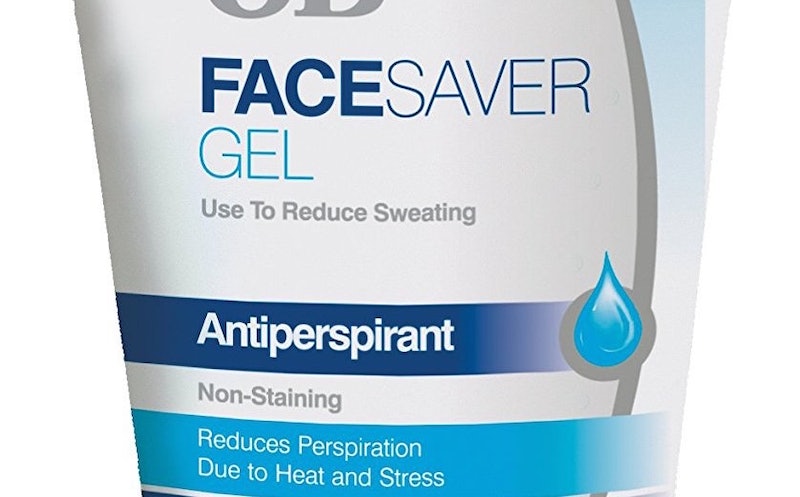 Whether you're dealing with a stressful situation, overheated subway ride, or steamy face-over-pan scenario, face sweat basically ruins any look immediately. It ain't cute, and while no one has an obligation to be cute, there's nothing like the pain of seeing your hard makeup work melt. Such was the topic on r/MakeupAddicts recently, when my mind was blown with an intro to one certain gamechanger: Facial antiperspirant, for all your face sweat needs.

In response to a grill cook's plea for help, the Reddit sub stepped in with suggestions for makeup that can hold up to an 110 degree atmosphere, for ten hours. No easy feat, but the truest test for longevity. Scattered among the go-to recommendations of primer, setting spray, and theater makeup, there was one that caught my eye. According to user IIIRuin, "Using an anti-perspirant like The Face Saver under your makeup can help a ton" — and going by its Amazon reviews, The Face Saver is an under the radar savior for your makeup.

Apparently, the gel works by "evaporating rapidly from the surface of the skin, leaving the active, antiperspirant ingredient as a thin film" that keeps sweat at bay for hours. The brand lists use cases like blocking upper lip sweat during "tense business meetings," but I could see it working equally well to keep you from sweating your face off during the morning commute. Your face in someone else's armpit, this is fine. Truly, no sweat.

The Amazon reviews are across the board, but if you've been wishing for a sweat-targeting solution, this could be your ride — the active ingredient is aluminum zirconium trichlorohydrex glycine, which is commonly used in underarm antiperspirants. Seconding the recc was Reddit user myanodyne, who said, "I have this as I sweat very easily. It's fantastic. I skip primer when I use it as it seems to have a bit of priming action." And who hasn't followed Reddit makeup reccs blindly. If you'd rather go for a dedicated primer first, though, Urban Decay's setting sprays were a much-recommended contender.

While their new primers are an exciting option coming down the line.

So if you've tried everything in Sephora and still find yourself damp-faced, go for it. Face gel for when the heat gets hot: Not the first time Reddit has changed a beauty life.