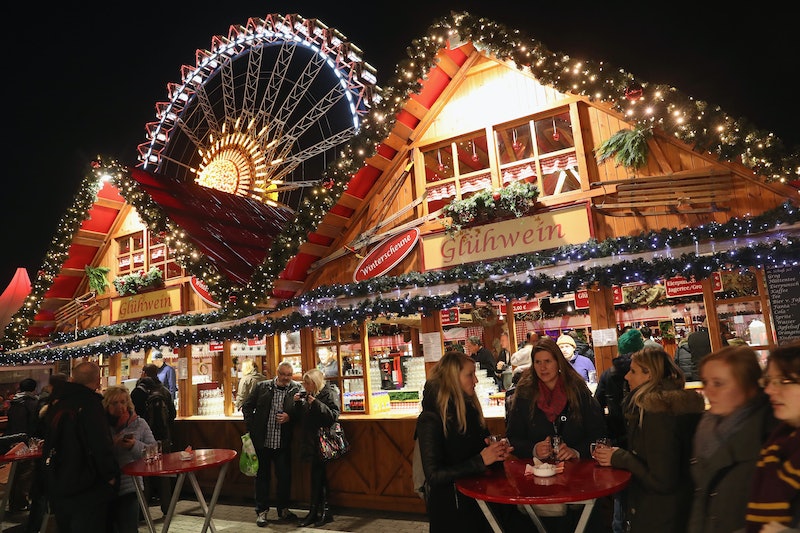 On Monday evening, the German capital was struck by tragedy as a semi-truck careened into a Berlin Christmas market. At least 12 were killed and nearly 50 were injured, according to police. Typically the smell of gluhwein, hot chocolate, and roasted nuts would fill the air as Germans and tourists mull about the many stalls featuring Christmas treats, gifts, and decorations, but this year that festive atmosphere turned tragic. However, there are ways you can help the victims of the Berlin Christmas market crash.

It's too early to truly say it's a terrorist attack, though some local media reports are pointing to such an explanation. The police think they have apprehended the driver of the truck, but the company who operates the vehicle said it lost contact with the driver earlier Monday. The truck was supposed to be unloaded in Berlin on Tuesday morning at 8 a.m. local time, Euronews reported. That means it could have been fully loaded, reportedly with 20 tons of steel.

The police will surely get to the bottom of the matter. But whatever the cause of the accident, it's important to focus on the victims and their families during this difficult time.

Victims, survivors, and their families will still need your support whether or not it's found to be an accident or an attack. So show your solidarity and support this holiday season. Here's how you can support those affected.

As always, many of the first responders to the scene were medical personnel there to see to the wounded. Now off-duty doctors are being called in from across Berlin to see to their needs. They will only be able to continue their work with an adequate blood supply. So if you find yourself in Berlin, donate blood to the Deutsches Rotes Kreuz, the German Red Cross.

2) Give What You Can

Just because you're not in Berlin or Germany does not mean you can't donate — it just means that money might be the easier way. You can donate money to the German Red Cross or to other organizations that work in the country like Victim Support Europe. They support victims of crime throughout Europe by working to provide them with high-quality services.

Germany actually has a nationwide victim support group called Weisser Ring. They provide everything from personal counseling to medical or attorneys' fees. They'll also help victims to apply for government assistance when available.

There are likely to be even more organizations and sites that work to raise money for the victims. Give what you can, but make sure to do your due diligence when investigating the charities. Charity Navigator is a great resource.

Odds are you're not reading this from Berlin, but it still applies to you. It's important to be respectful to the victims — both the injured and the deceased. Many victims' rights advocates would ask that you not photograph or post to social media any photos of the victims. If you think it's important the police see something, you can upload it here.

6) Don't Speculate On What Happened

This tip comes directly from German police: Don't spread rumors. The police also asked citizens to stay home and out of the way as they investigate. But those reading this from afar can also refrain from pontificating on what may have happened until the facts have been released by the police.

In the next days vigils will likely be planned around the world in remembrance of those killed and injured in Berlin. Consider attending one to show your solidarity. Berlin had a large event in memory of those lost in the Orlando Pulse shooting. Consider returning your support by going to a Christmas market vigil near you.

Don't stop yourself at just one, either. This is a huge tragedy, and especially so close to the holidays, there will be lots of emotions that the families need to process — and your solidarity, be it blood, money, or thoughts, will mean a lot.