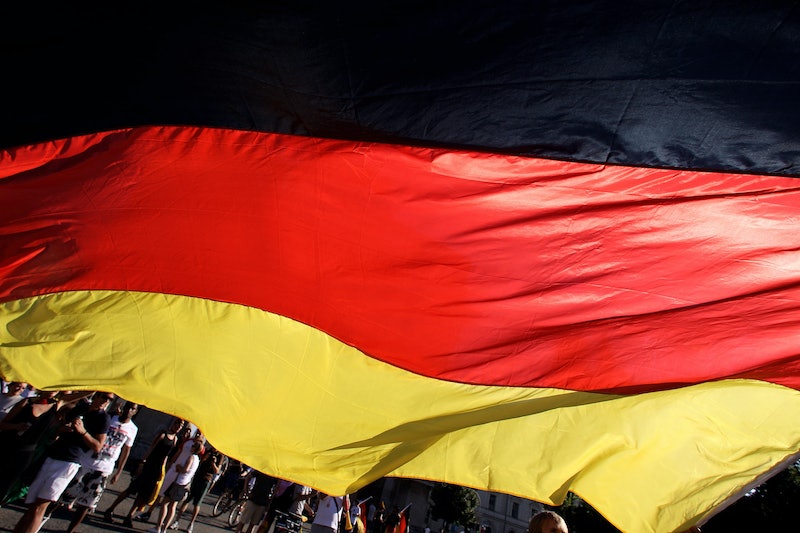 Families and visitors in Germany are still anxiously waiting for news about the deadly Dec. 19 truck attack on a Berlin Christmas market in the middle of the city, which police say they believe was an intentional act. A lot of details are still unclear, though several have been killed and dozens have been injured. But in light of this latest assault on innocent humans, you might be wondering how you can show Germans around the world that, like John F. Kennedy famously said, "Ich bin ein Berliner" ("I am a Berliner").

If you'd like to apply a black, red, and yellow German flag filter over your profile photo, RainbowFilter has you covered. Make sure you have a copy of your current profile photo saved on your desktop, or somewhere you can find it easily. Then upload your Facebook or Twitter avatar directly onto the site by clicking the "Germany Filter!" button. Select your photo, click "open," and you'll see the flag overlay on top of your photo.

Next, click "download photo" to save the new image, then upload it to your social media sites. Alternately, you can use RainbowFilter's Facebook and Twitter login buttons to streamline the process. Just click the appropriate button, give the app permission to access your photos, and viola! (Note: You do not need to give RainbowFilter permission to post on your behalf to get the overlay.)

If that's not your style, or you'd like something a little more subtle, you'll want to turn to the foremost creator of profile-picture adaptation apps, Twibbon. At press time, there did not appear to be a specific "campaign" commemorating Berlin, but there are several pre-existing profile picture adaptations that will show you stand with the German people. Right now, you can add a small German flag in the right corner of your photo, or put the colors of the flag as a band across the top of your photo. If you want to go all-out, this Twibbon replaces your profile picture with black, red, and yellow horizontal stripes.

Regardless of which Twibbon you chose, updating your profile picture is easy: Just click the corresponding link above, then select "Login to Add Twibbon." A pop-up message will appear asking which social media sites you'd like to update with your Twibbon profile pic. Once you've given the site permission, those buttons will change to read "Add to Twitter" and "Add to Facebook." Clicking on either of those buttons will automatically update your profile picture on that platform, and send out a message telling your friends where and how you updated your photo.