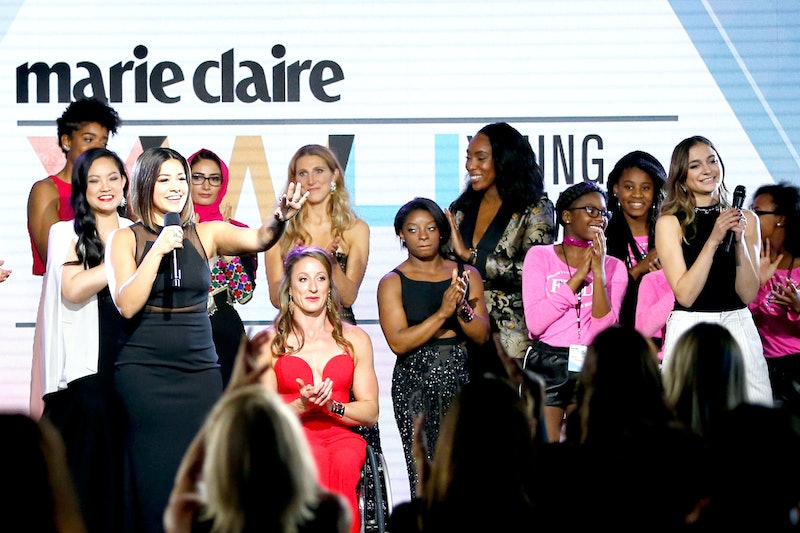 On Monday night, women all over Twitter responded to the Young Women's Honors message of empowerment and the important showcase of women honoring women on Twitter. The ceremony's overall prevalence, nay, focus on women presenting awards to other women for their achievements was a key message to send to viewers. Even simple acts like the female presenters stating why each honoree's achievements mattered on a bigger scale helped to illustrate to female viewers that no dream, choice, or career is less than another.

One of the primary goals in putting together the Young Women's Honors was to highlight those Millenial women demonstrating intelligence, passion, and a worldly mindset to improve the lives of others. As host Gina Rodriguez stated:

My goal in creating Young Women's Honors is to generate positivity, inclusivity, unlimited potential, and the possibility every woman is born with. As a young Latina, I had to break down barriers and overcome naysayers. When you see someone following their dreams, it gives you allowance to follow your own.

With the exception of Simone Biles, the honorees were movers and shakers in their respective fields but had not been given the kind of national or international visibility they truly deserved. Now, those seven women are just as visible and celebrated as Biles.

On television, the Young Women's Honors was full of women, leaders and icons in their own right. There was a racially diverse group of honorees and those in attendance. There wasn't a focus on female celebrities; rather, women from a varied group of industries could be found in the audience. The female viewers reacted excitedly, joyously, and even gleefully on Twitter.

There was no shortage of happiness on Twitter as women quickly recognized the power that comes from watching women supporting other women. Twitter user Ray of Sunshine wrote: "From #OprahandFLOTUS to #YoungWomensHonors I'm feeling every bit of empowerment as a young black woman in America." Another user, Kristi Marie Olienyk, said: "The YWH was inspiring and a good reminder to never give up on the passion for making change."

The Young Women's Honors proved that representation matters. In order to show someone that they can manifest their own dreams of success, then the right place to begin is by showcasing that someone like them can do it and get widely recognized for it. This is a big moment for women if only because it was created by women and for women. In the end, it was the women who watched that saw a diverse group of female honorees and, I hope, may have turned off their televisions feeling a bit better about the world.

More like this
Sandra Bullock, Girlboss Extraordinaire
By Matt Harkins & Viviana Olen
Kylie Jenner Roasts Kendall For Her Cucumber Cutting Skills On TikTok
By Jake Viswanath
Sadly, 'Fantastic Beasts: The Secrets Of Dumbledore' Isn’t Streaming — Yet
By Arya Roshanian
Kaley Cuoco & Tom Pelphrey Just Made Their First Public Appearance As A Couple
By Hugh McIntyre
Get Even More From Bustle — Sign Up For The Newsletter