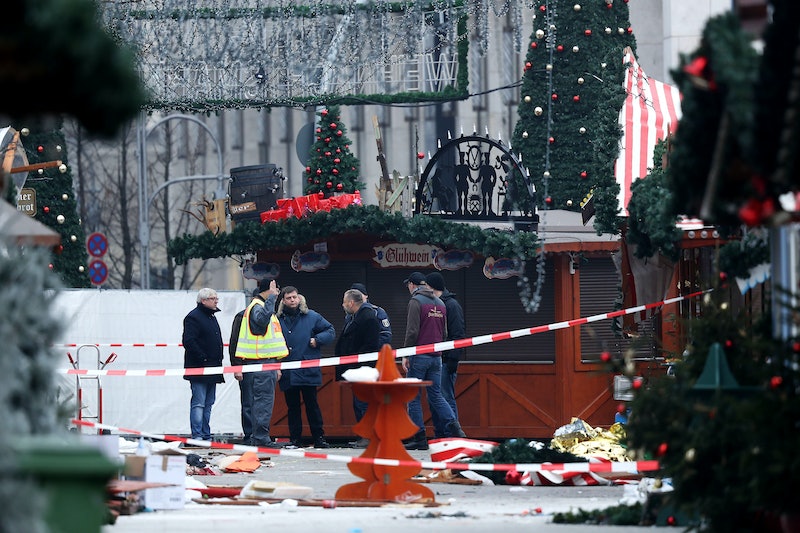 A truck rammed through a Christmas market in Berlin Monday night, killing 12 and injuring 48 people. The truck jumped the sidewalk and careened through stalls selling mulled wine, roasted nuts, and other Christmas goods. The kiosks were in front of Kaiser Wilhelm Memorial Church in one of the city's premiere shopping districts. The driver fled the scene, but a suspect was quickly apprehended in the area. Now, investigators and politicians are trying to make sense of what happened. These updates to the Berlin Christmas market attack come as Chancellor Angela Merkel and Germany's interior minister shed light on what occurred and who is responsible.

Chancellor Merkel spoke first to reporters while dressed in black. She stressed her concern for the victims' families, noting that "12 people, who were looking forward to Christmas and had plans for the festive season, are no longer among us." Her comments were brief, and she called the incident a terrorist attack. She also acknowledged the difficulties politically if the perpetrator was later proven to be a migrant or refugee:

We must assume at the current time that it was a terrorist attack. I know that it would be particularly difficult for all of us to bear if it would be confirmed that this deed was carried out by a person who sought protection and asylum in Germany. This would be particularly repugnant in the face of the many many Germans who have dedicated themselves day after day to helping refugees, and in the face of the many people who actually need our protection and try to integrate into our country.

Later Tuesday, Interior Minister Thomas de Maizière also spoke, clearing up details on what is known about the suspect. He had no record of terrorism, but was known to the police for minor infractions. De Maizière acknowledged that the suspect has denied all the charges for which he was accused. Berlin police later said that they were "uncertain" the suspect they arrested was the driver of the truck, later adding that a "dangerous criminal" could still be at large.

De Maizière clarified that the passenger in the truck, who had been called a co-driver by some in the media, was shot to death. That would match the story of a possible hijacking. The Polish trucking company had said they lost contact with the driver of the rig earlier in the day Monday.

De Maizière went on to say that Germans "must not compromise our lifestyle, if we do that the enemies of freedom have already won." He added, “We are deeply saddened but we also fight for our freedom.”

The police were less sure about the assessment Tuesday afternoon than de Maizière had been earlier. The Berlin police chief said it was not 100 percent "clear" that the suspect in custody drove the truck. He said the investigation is ongoing and asked anyone who sees anything suspicious to get in touch with the police. A raid was held overnight in a refugee camp at the old Tempelhof Airport terminal, but no one was arrested.

Christmas markets in Berlin will remain closed Tuesday but open in the rest of Germany. A vigil will also be held for those killed at 6 p.m. local time in the church on the same square where the attack took place.