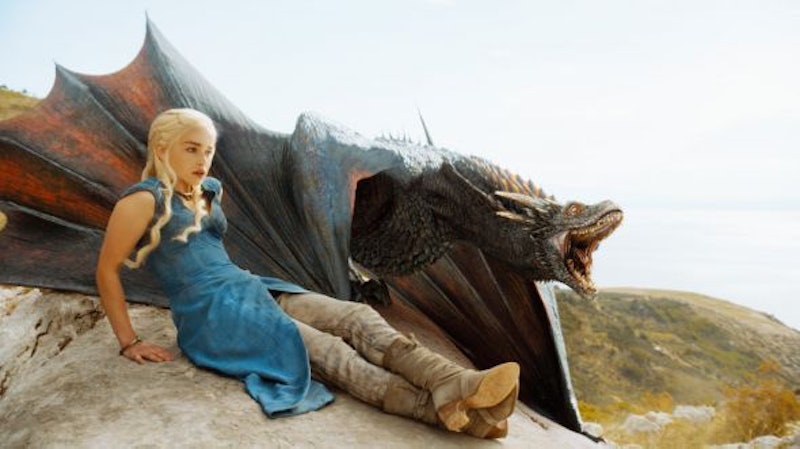 Game of Thrones is not Breaking Bad; the meth king pin series caught on slowly and then in ignited in the latter half of its run. Game of Thrones is not The Wire, which achieved cult status mostly after the series was complete. No, Game of Thrones is Game-of-effing-Thrones and if you’re not watching the Game of Thrones Season 4 premiere on time, thus giving yourself the ability to converse about it on Monday morning with the kind of academic precision normally reserved for Unified Engineering Classrooms at MIT, well, you might as well just turn in your Twitter account and call it a day, because the 21st century has passed you by.

Let’s be frank: even non-watchers probably know what "The Red Wedding" is. They probably know every single difference between what’s happened on the HBO Game of Thrones adaptation and what happens in the George R.R. Martin book series. Because people talk about Game of Thrones all the time. Sure, there was a time when reading fantasy literature made you a nerd; and watching fantasy TV, your own sub-breed of human. Those days are not gone. My tendency to listen to academic courses on CD about the works of J. R. R. Tolkein while driving still makes my lunch money certifiably steal-able and my backside, readily available for wedgies. (I live in a 1960s sitcom.) But Game of Thrones has somehow gotten a pass from all that, and we must all take it and run with it.

It’s imperative that you make sure you’re up to speed on Game of Thrones by the time you walk into work this Monday morning, or things could get real Rains of Castemere up in there, if you know what I’m saying. But don’t worry if sitting down in front of your TV with a turkey leg, a flagon of ale and your cuddliest/deadliest direwolf at 9 PM on Sunday isn’t an option. There are a few other ways to catch the Season 4 premiere:

I’ll shoot you straight: HBO makes it pretty difficult to watch Game of Thrones online without subscribing to their network — fair enough, they’ve got a valuable product. You’ll need HBO Go to immediately watch the Season 4 premiere online, for which a paid HBO subscription (or a generous friend with an HBO subscription) is necessary. Sorry.

Experiments with live streaming didn’t go so well with the True Detective finale, so count on standard HBO Go procedure: the episode will be available immediately following its television airing, Sunday at 10:05 PM ET.

If you are a faithful HBO subscriber, you will be rewarded with On Demand options. Most cable network providers — Time Warner Cable, Verizon, Cox, etc. — have episodes of Game of Thrones available the morning after they air. Maybe you can even catch it before you’re riddled with spoilers from the outside world! Though sometimes with high demand episodes, such as the season premiere of TV’s hottest show, On Demand availability can take up to 24 hours.

Of course, if you just need to do a little catching up (might I recommend re-watching each season’s penultimate episode) before Season 4’s return, for a short time, most episodes of the full Game of Thrones series are available On Demand, and full seasons or individual episodes can be purchased on Amazon.