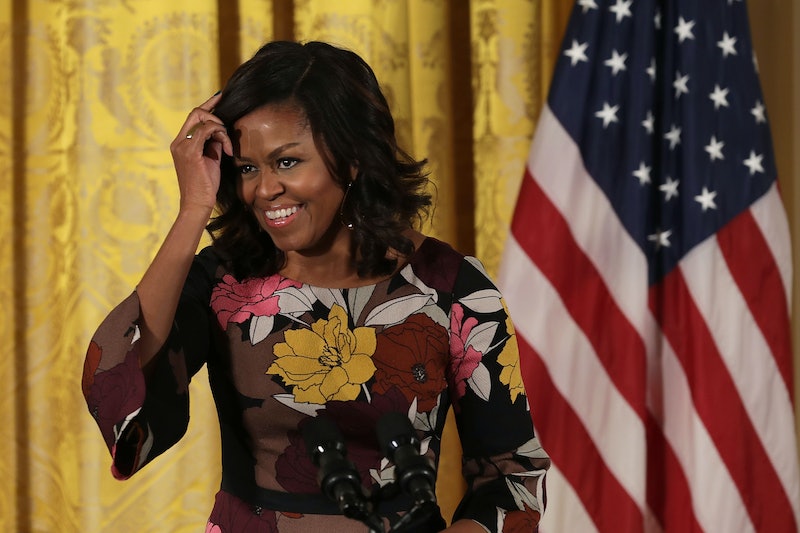 Now that electoral votes are official, we can say with no caveats that Donald Trump will be the 45th president. This reality, first potential and now definite, has caused millions of anti-Trump Americans a great deal of angst, fear, and even despair over the past 12 months. And so it is a holiday gift, a miracle of modern sorts, to hear First Lady Michelle Obama’s words of encouragement, strength, graciousness, and hope during her final White House interview with Oprah Winfrey.

Obama's ability to rise above the muck and mire of everyday politicking will come as no surprise to even a casual follower of the first lady. Obama's speech at this summer's Democratic National Convention was regarded as one of the event's best. A single line from that address — "When they go low, we go high" — not only captures Obama's approach to life in the FLOTUS spotlight, but was catchy enough to become a national slogan on its own. And when Winfrey asked her about that line, Obama responded, "I want people to act on it, not just repeat it," emphasizing the importance of "modeling what we want." It's a needed reminder for everyone, regardless of political affiliation, to resist the bullying and belittling that became a common feature of Trump's campaign. And Obama's entire interview with Oprah spread a message of hope we all could use right now.

A focus on children was a recurring theme throughout the interview, as Obama placed many of her decisions as first lady within the context of how things might look or sound to a child. Early on, Obama told Winfrey, "Words matter. And they matter most to our kids." It is too easy to hear only what's there between the lines, to think immediately of the outrageous, threatening language so often spewing from out the mouth of Trump. But that would ignore Obama's eight-year-long focus on young people, from her Let's Move! initiative to end childhood obesity to the regular welcoming of kids from all backgrounds into the White House. "Images, experiences, can be life-changing, especially for our kids," she told Winfrey, before appearing to grow a bit emotional remembering "the looks on their faces," referring to children visiting for the first time.

Winfrey addressed some of the criticism leveled against Obama, yet her responses to those attacks emphasize a way forward of hope. When Let's Move! came under fire from feminists on her own side, as well as critics on the right, Obama answered with decisive brevity: "Everybody has something to say." (Read: Your opinion is noted, but I'm moving on now.)

And when Winfrey asked how Obama had navigated the immense pressures of her position, she had a similarly concise response, saying she got through it all by "being a grownup." Obama meant this in both the literal sense, admitting that her task would have been much steeper if she were in her 20s or 30s, but she also credited her experiences working as a lawyer and as a vice president at the University of Chicago's Medical Center. That background helped her hold her own.

Obama later turned the focus to her own kids, citing them as a major reason she would shy away from presidential aspirations of her own. “What people don’t understand is that you run — their lives stop at any age,” she said, referring to her two daughters, Sasha and Malia. That will be disappointing news to fans of the first lady, many of whom have fantasized about an Obama return to the White House. Unfortunately for them, Obama says "it's not something I would do."

At the start of the interview, Winfrey asked Obama about handling the nasty comments sometimes directed toward her. "You know, the bad stuff, I just don't hold onto," she said. Obama went on to say:

We’re so afraid of each other... Color, wealth, these things that don’t really matter still play too much of a role in how we see one another. And it’s sad, because the thing that least defines us is the color of our skin, is the size of our bank account. None of that matters.

It's disappointing that, in 2016, this needs to be said at all. But not only does it bear repeating the sincerity behind Obama's sentiment has been made clear, but also in how she has lived "out loud" the values she espouses.

For anyone who is looking for hope, they need look no further than the public presence of a truly singular first lady. And while she will be missed, Obama deserves to be emulated in action.