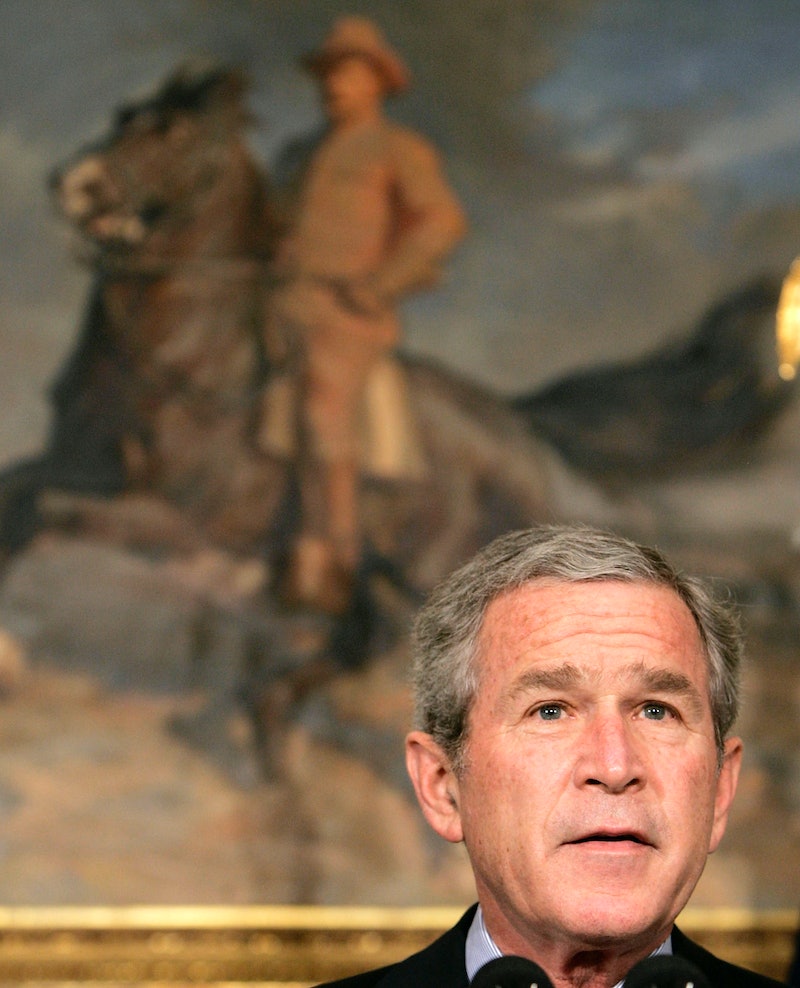 While we're over here worrying about the pullout of troops from Iraq, the fragile state of security in Afghanistan, and a continually soaring national debt, former President George W. Bush has been painting up a storm. Bush is channeling his inner Bob Ross in a new exhibit called The Art of Leadership: A President’s Personal Diplomacy at the The George W. Bush Presidential Center in Dallas.

The exhibit features Bush's interpretations of various world leaders like Russian President Vladimir Putin, former British Prime Minister Tony Blair, and the Dalai Lama. According to Bush, painting has changed his life. He first took up art in 2009 using an iPad app, and then hired an instructor. The world first got a taste of his paintings — and then collectively mocked them — when a few were leaked last year, depicting Bush in the shower and taking a bath.

But what does George himself have to say about his art?

His cold, blue eyes resonate — when you meet him, and in that painting. He’s a zero-sum thinker.

A little bit [of tears], you know. Just thinking about him. He’s a kind man. He’s a great listener as you know. When it came to foreign policy, he was a master at befriending people to find common ground and the way he did so was through personal diplomacy.

I watched him very carefully through his presidency. I always admired him as a man. It was a joyful experience to paint him. I painted a gentle soul.

He said, 'You painted my portrait?' I hope he likes it. I like it because it conveys a compassionate person and a strong person and a reliable friend.

On his art instructor:

She said, 'What's your goal?' and I said, 'Well, there's a Rembrandt trapped in this body... Your job is to unleash him.

On other paintings of world leaders:

I hope they take it in the spirit in which these were painted in. That was the spirit of friendship and that I admire them as leaders and was willing to give it a shot in terms of getting people to see how I felt about them.

The Internet's reaction? Maybe he should've figured out this passion before he became leader of the free world.