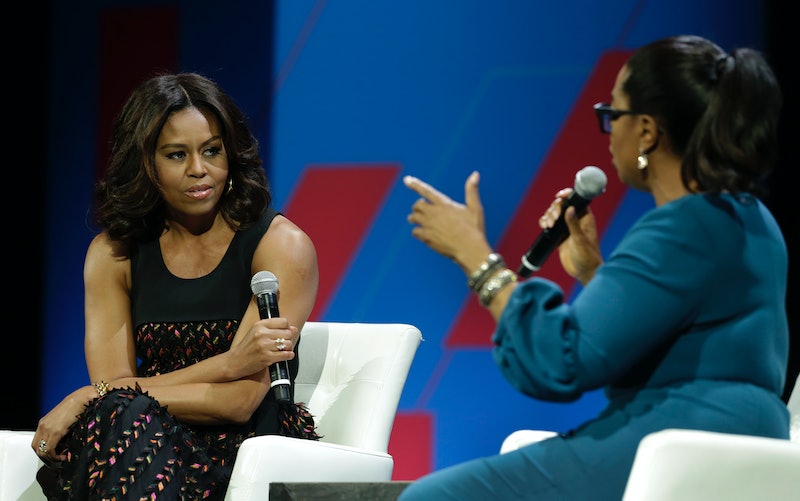 Yesterday, CBS aired the final interview with Michelle Obama as first lady, conducted by longtime media megastar-cum-legend Oprah Winfrey. Obama was composed, gracious, and authentic — all traits that could be applied to Winfrey as well. And this is not the first time the two sat down together in a professional capacity. In 2009, Oprah interviewed Obama for O magazine, and she previously hosted the Obamas on her talk show in 2006, back when Barack was still just a senator from Illinois. But Michelle Obama and Winfrey are friends outside the professional sphere as well.

Toward the end of the CBS interview, Winfrey invites Obama to go "glamping" with her (a portmanteau combining "glamorous" and "camping," and the only acceptable way to sleep in the woods, in my humble opinion). Obama tentatively agrees, and if you watch closely, her tone changes to one of familiarity. That makes sense, considering very few people would agree to up and spend a weekend alone in nature with anybody but a very good friend. In fact, a "glamping" invitation is akin to the "Can you help me move?" test of friendship: Anyone who says yes is the real deal.

Oprah has admitted outright that she is friends with both the president and Michelle Obama. In a behind-the-scenes video for Oprah.com, Winfrey makes clear that she is resolutely opposed to even the appearance of using that friendship for professional gain. And as many Americans will no doubt remember, Winfrey endorsed then-candidate Barack Obama in 2008, bringing her inimitable star power to his bid to become president. And it's worth noting that her endorsement of Obama marked the first time Winfrey put her name down next to a specific candidate. The friendship is strong between these two families.

How strong? Strong enough that in 2014, Michelle Obama spent her birthday at Winfrey's place in Maui, on a "girlfriends' getaway." Moving past the FOMO here, it's clear that Obama and Winfrey are very close indeed. You don't spend your birthday with just anybody, and you certainly don't travel thousands of miles to hang out with casual acquaintances.

And while that type of off-camera camaraderie can often distract, or even detract, from a good interview, in this case, the friendship between these two women was ideal for the moment. Obama was at ease, and her uplifting answers, even in the face of the criticism she's endured as First Lady and the coming reality of a Trump presidency, were a motivating salve for voters still feeling wounded by the election results of Nov. 8.