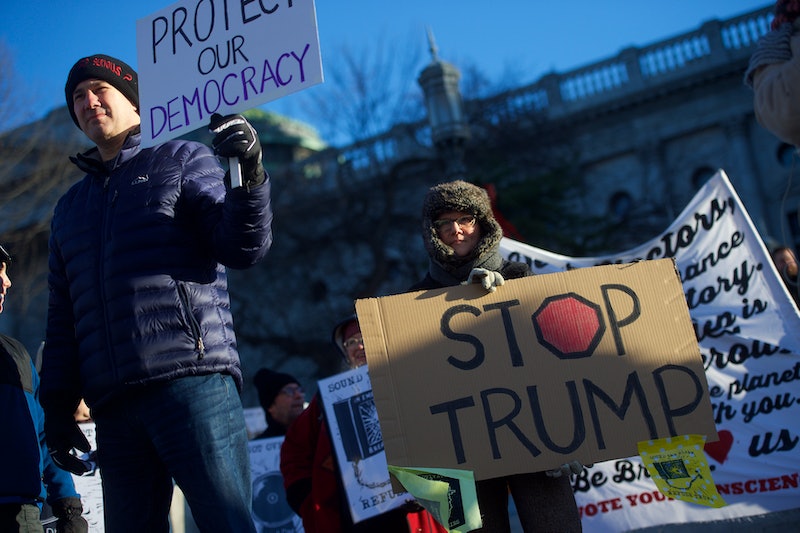 On Monday, as was widely expected, the Electoral College officially selected Donald Trump to be the 45th president of the United States, even though around 2.9 million more people voted against him than for him, according to the Cook Political Report. Many had been hoping that the Electoral College, the antiquated body conceived of by the framers of the Constitution to select our president (whether to protect us against demagoguery, make it easier to choose the president with such a large nation, or simply safeguard that "peculiar institution" of slavery) might save us from a fate worse than Trump. But instead the electors — well, most of them — did exactly what they were supposed to.

So if the Electoral College is neither going to save us from demagogues nor choose the person more people actually voted to be president, I think we can all agree it has to go. Here’s the best way to make that happen.

The Electoral College is written into the Constitution (unlike, say, election procedure, which varies wildly from state-to-state, or even what day the House and Senate meets, which can be changed by a simple majority in Congress), so it’s a pain in the tuchas to alter. Any change to the Electoral College would have to be made by amending the Constitution, which requires two-thirds majorities in both houses of Congress, and then ratification by three-quarters of the states. In other words, don’t hold your breath.

But there is a workaround, which takes advantage of the fact that the Constitution doesn’t specify how states allocate their presidential electors. Even though most states use the winner-take-all method, wherein the popular vote winner in each state gets all of that state’s Electoral votes, two states, Nebraska and Maine, allocate their electoral votes by congressional district (as well as two by statewide vote). All of which is to say that states can do whatever they want.

Which leads us to the National Popular Vote Interstate Compact, a state-level bill which says, essentially, that once enough states sign on to the Compact to account for a majority in the Electoral College (i.e. 270 votes), then each signatory of the Compact will give their entire slate of Electors to the winner of the national popular vote, even if it’s different from their state’s popular vote. Essentially, this would render the Electoral College null and void.

So what can you do? First, find out if your state has enacted the Compact here. If it hasn’t, look up your state legislators (most states have a Senate and a House, just like the country) and write to them about the Compact. And make sure you pay attention to when these representatives are up for reelection. If they oppose the National Popular Vote Compact, see if their opponent supports it, and rock the vote.

More like this
Michigan’s Governor Is “Going To Fight Like Hell” To Protect Abortion Access
By Andrea Zelinski
How To Fight For Reproductive Rights, Based On How Much Time You Have
By Courtney Young
LGBT+ Men Fleeing Afghanistan Were Denied Asylum By The Home Office, New Findings Show
By Sam Ramsden
You're Probably Doing These Gross Things Around The House Without Even Realizing It
By Rachel Bar-Gadda
Get Even More From Bustle — Sign Up For The Newsletter