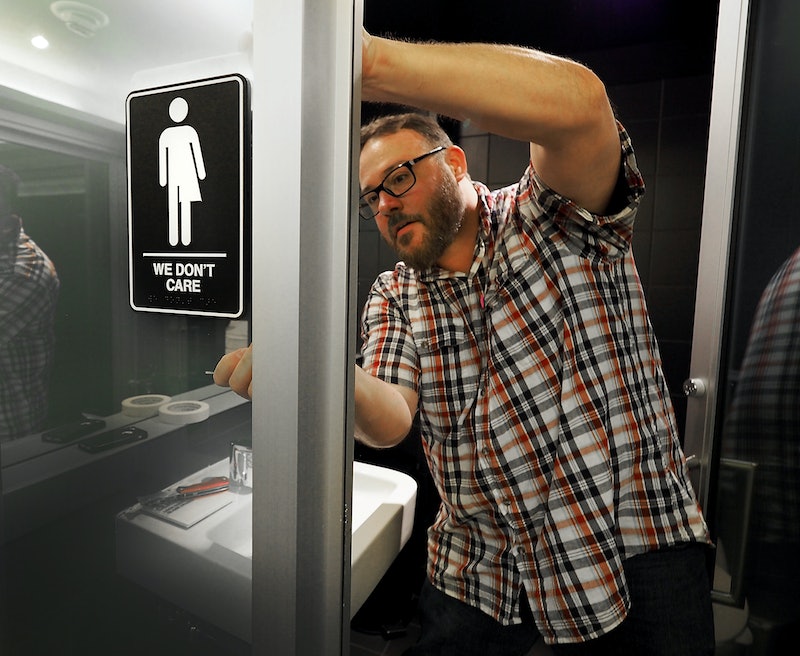 As we begin our march into 2017, many of us are keeping an eye on the upcoming legislative agenda — which, in may ways, looks like something out of a nightmarish proto-apocalyptic novel. State legislators across the country are planning everything from proposals severely limiting the rights of immigrants to plans to strip away reproductive rights, but there is one thing guaranteed to pop up in legislatures across the country: So-called "bathroom bills" targeting the trans community. These bills typically assert that people should only be allowed to enter the bathroom associated with their gender assigned at birth, rather than the bathroom that corresponds to their actual gender. In Texas, a looming bill likely to be introduced early next year highlights not just the conservative obsession with who is peeing where, but the specific and darker intent behind these bills — which aren't just about transphobia, but transmisogyny, the specific brand of hatred leveled at trans women.

North Carolina's HB2 dominated headlines this year when it sparked controversy across the state, but it wasn't the only bathroom bill under consideration in 2016 — and it laid the blueprints for a much bigger conservative fight over bathrooms. One might reasonably wonder what conservatives are doing in the bathroom (and how they are doing it that the genders of other people in the bathroom are such a pressing concern), but in a way, this isn't even about bathrooms. Instead, it's about singling out the transgender community as abhorrent and strange, and in particular making sure the public gets the message that trans women are freakish, gross, and unacceptable.

In Texas, legislators are going to take up the "Women's Privacy Act," a bathroom bill that would specifically ban trans women from women's rooms, while allowing trans men to use men's rooms (according to WFAA, a Texas ABC affiliate, "Lt. Gov. Dan Patrick told the Dallas Regional Chamber that it would be a priority in 2017.")

This completely nonsensical divide highlights the hypocrisy of bathroom bills, which aren't about "privacy" and "safety" at all. Instead, by giving trans men a pass, the bill normalizes trans men — who often have a much easier time slipping under the radar thanks to passing privilege and the fact that appearance standards for men are much more flexible than those for women.

Trans women, on the other hand, are feared and hated across the United States. Sometimes because they don't match with appearance and beauty standards put on women. Sometimes because of a creepy and weird thread of "no homo," reinforced by myths about trans women tricking or deceiving men into having relationships with them and the underlying belief that trans women aren't "real women." Sometimes because of the belief that trans people don't really exist, that trans women are really men in dresses, predators out to assault cis women and girls. If gender variance bothers cis people, if diversity upsets the cis arbiters of gender, trans women are treated as the apex of horror. It is not a coincidence that 2016 was a particularly deadly year for transgender Americans, and that most of the murdered were women.

I don't need to delve into a detailed dissection of the myths surrounding trans women in the bathroom — though I will note that trans women use the restroom for the same reasons everyone else does, including toileting, washing their hands, freshening up their makeup, making sure their clothes look neat, and taking bathroom selfies when they're feeling particularly glam. One thing they don't use the bathroom for is assaulting people — though they are at an increased risk of assault in bathrooms, according to a Williams Institute study. And to date, the number of recorded incidents of bathroom assaults committed by trans people is zero. If a sexual predator is going to stalk people in bathrooms, he's not going to see the sign on the door and think "oh well, I guess I'll have to go wait in the alley outside."

But positioning trans women as creepy sex predators means that people will treat them that way — reinforcing stigma and hatred, and endangering them. If cis women are told that trans women are using the bathroom as a hunting ground, many will start gender policing in bathrooms, threatening trans women and calling security to have them thrown out. Sometimes, that security responds by assaulting them.

This bill sends an unmistakeable message: trans women aren't women — they're freaks and deviants, and they are out to assault cis womanhood. And this message is being pushed against the will of the majority of Texans. The Texas Association of Business estimates that the bill could cost Texas billions of dollars and tens of thousands of jobs, and their research found that a striking majority of cis people of all political stripes support workplace protections. Chris Tomlinson of the Houston Chronicle argues that it's a tactic to distract from Lt. Governor Dan Patrick's legislative failures, but it's one that could come at a high price for trans women in the state. Democrats in the legislature have already vowed to fight it.

It also goes against the will of sexual assault and domestic violence advocacy groups, who are often namechecked in the debate over these bills, as many legislators proposing the bills claim that they protect victims. But these groups argue that there's absolutely no grounds for the bathroom predator myth. Meanwhile, the recently published U.S. Trans Survey found that almost half of respondents reported experiencing sexual assault. Those incredibly high rape statistics are fed by social attitudes about trans women that make them targets for abuse, and less likely to be believed when they report.

Patrick's reference to the president-elect as a "friend in the White House" and comments identifying this as a legislative priority are a shot across the bow and a warning sign. Texas isn't the only state with an anti-LGBQT legislature getting excited about what lies ahead, especially in light of the revival of the First Amendment Defense Act, which would shred civil rights for LGBQT people in the United States.

Oddly, Patrick admitted that trans people are likely already using the bathroom in Texas, but said he feels that the public needs to be protected from "men entering the bathroom." In strict point of fact, though, they already are — if a cis man walks into a bathroom used by any gender and assaults someone, he can, should, and will be prosecuted for it, because it is illegal to assault people in the bathroom (or anywhere else). If the concern here is about people using bathrooms to identify and prey on victims, more robust and responsible handling of sexual assault cases is in order, to increase the chances that people will feel comfortable coming forward to report — and that includes the trans women singled out by bills like this one, turned into monsters and converted into easy targets for harassment and assault.

At times, it seems like there's a belief that all trans people have the same stakes in the battle over bathrooms, but that's not true. Trans women and otherwise gender nonconforming people who stick with the women's room for lack of a better alternative have the most at risk, and the most to lose. As we organize to combat such bills by contacting legislators to oppose them and supporting equal protection bills at the state and local level, it's important to remember that these bills are about criminalizing trans womanhood, and reinforcing hateful myths about trans women.