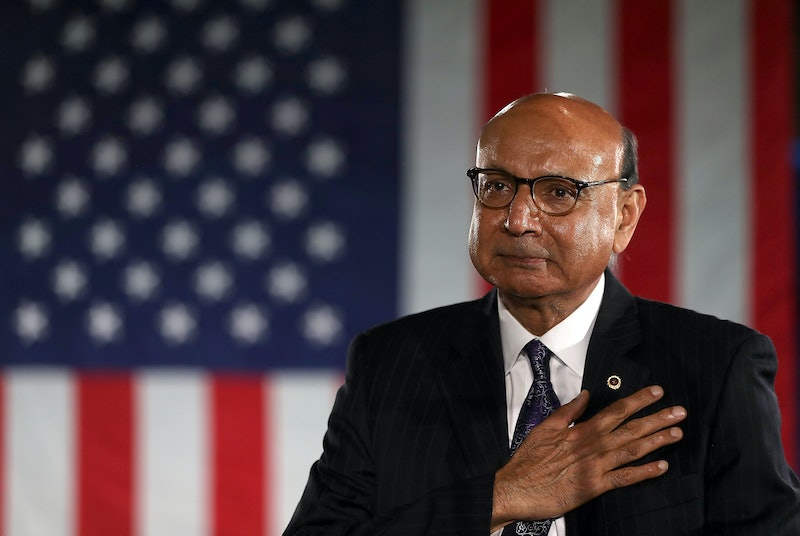 More than a month after the general election, the country is still experiencing the fallout from one of the most astounding elections in modern times. During his presidential campaign, President-elect Donald Trump offended a lot of people. Two of those people were the parents of a Muslim American soldier who died fighting in Iraq. Much like he did at the Democratic National Convention in July, Khizr Khan is calling out Trump for failing to protect Americans in the wake of his election.

Khan gave an impassioned speech at the DNC where he railed against the claim that American Muslims have terrorist sympathies, a sentiment often promoted by the right, and specifically Trump. Khan offered up the example of his son, a Muslim American soldier who served in the United States Army and died in a car bombing in 2004. Then, he famously asked Trump if he had ever read the Constitution, while holding up his own pocket-size version. Trump's response to the speech was to question why Khan's wife, Ghazala, appeared onstage yet didn't speak. Trump reasoned it must have had to do with their Muslim culture. It was one of the worst responses he could have given.

Since Trump's official Electoral College win, Khan told The Guardian how the DNC and Trump's win have changed his and his family's lives forever.

Khan said he has taken security measures at his home in Virginia, and tells his female relatives not to travel alone. He is worried about the hatred that has been directed toward immigrants during and after the election, and is very angry that Trump will not denounce the violence being committed across the country.

He explained the backlash by saying, "The far right feels that their voice has been heard and they have a license to commit these crimes. I have seen the fear of immigrants heighten after turmoil in the past. But never to this degree."

Khan argued that Trump has the duty as the future leader of the country to end the crimes. He wanted to say to him, "You have a responsibility as a leader to end it." Rather than fostering peace and encouraging diversity, Trump based his platform upon diving people. Along his campaign trail, Trump had proposed that people wishing to enter the country should be required to take an ideological test to make sure they didn't hold views hostile to American principles. Khan responded by challenging Trump to take a naturalization test.

Although Khan said he isn't receiving as many racist emails as he once was earlier this year, those messages still appear somewhat frequently. Since the election, he's gone on a speaking tour around the country, and hopes to inspire American Muslims to become involved in politics. Khan's experiences this year offer both a warning of why Trump is so dangerous, as well as hope for the future of our country for those who see injustice to speak up against it.