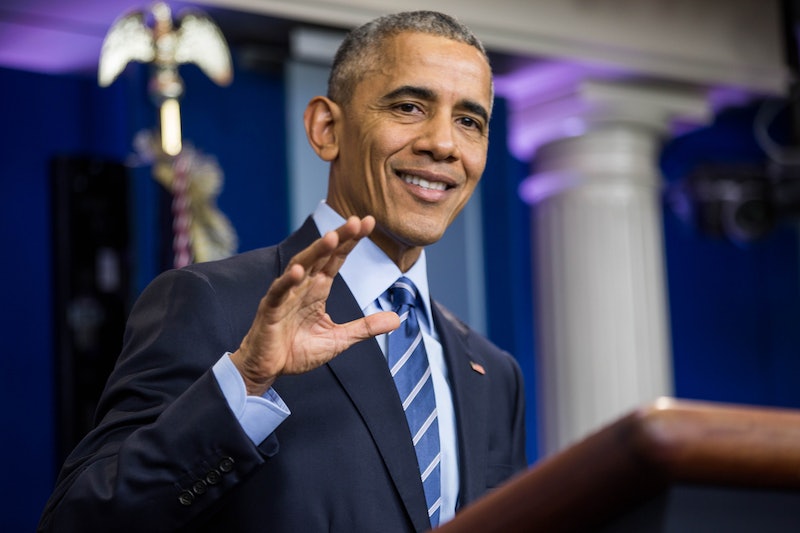 News that the Obama administration has placed an "indefinite" ban on offshore oil drilling in the Arctic and Atlantic ocean is widely being viewed as a preemptive hedge against the incoming administration of President-elect Donald Trump. But with just one month left before President Obama departs from his post and Trump is sworn in as the 45th President of the United States, there's a predictable question on everyone's mind: will Obama's Arctic drilling ban hold up under Trump, or could he undo these moves with the stroke of a pen?

The answer, as it stands now, isn't entirely clear. According to The New York Times, Obama is taking the unilateral action under the authority of the Outer Continental Shelf Lands Act of 1953, and it's a move without solid historical or legal precedent. As such, it's hard to know what kind of response the Trump administration might take, whether he simply tries to write the ban out of existence with his own sweeping interpretation of executive power, or whether, as supporters of Obama's ban are suggesting, he's forced to take it to court.

There's no doubt that it looks to be ripe for a court challenge at bare minimum, especially with all branches of government surely opposed to it. With Trump's pick for Secretary of State being ExxonMobil CEO Rex Tillerson, and his pick for EPA chief being hard-line climate change denier and big oil sympathizer Scott Pruitt, and the President-elect himself having once claimed the entire notion of climate change is a Chinese hoax, it's fair to say that the new administration might not be happy about this.

Regardless of how vigorously the Trump administration will try to reverse this, if it indeed proves true that they need to go through the court system to get it done, then Obama's gambit will have bought some amount of time for environmentalists to strategist, and for sections of the Arctic and Atlantic to go untapped. Obama made the announcement on Dec. 20, just one month prior to his departure from office, in concert with Canadian prime minister Justin Trudeau.

The two leaders announced the agreement in a joint statement, citing the safety and scientific risks of "oil extraction and spill response" in the Arctic.

... due to the important, irreplaceable values of its Arctic waters for Indigenous, Alaska Native and local communities’ subsistence and cultures, wildlife and wildlife habitat, and scientific research; the vulnerability of these ecosystems to an oil spill; and the unique logistical, operational, safety, and scientific challenges and risks of oil extraction and spill response in Arctic waters – the United States is designating the vast majority of U.S. waters in the Chukchi and Beaufort Seas as indefinitely off limits to offshore oil and gas leasing, and Canada will designate all Arctic Canadian waters as indefinitely off limits to future offshore Arctic oil and gas licensing, to be reviewed every five years through a climate and marine science-based life-cycle assessment.

It remains to be seen what response Trump will have, if any ― on his notoriously bombastic Twitter account, at least, there's has been no reply so far.