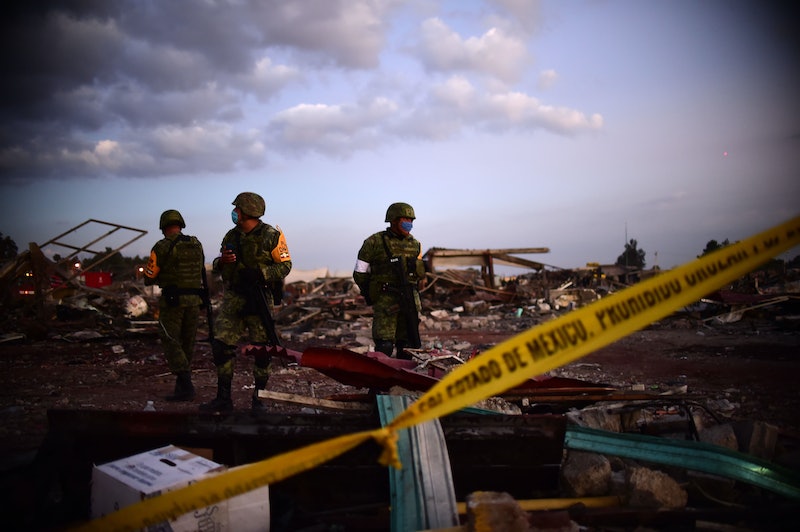 Holiday preparations took a turn for the worse on Tuesday near Mexico City, when a fireworks market erupted in explosions. The explosive blast within the open-air San Pablito market set off a chain reaction of loud pops, bright flashes, and thick smoke as fireworks throughout the market added to the incident. From photos of the Mexico City fireworks explosion, the scene appeared at all angles to be both chaotic and devastating.

According to various reports, Tuesday's explosion did horrific damage. Dozens of bystanders — upwards of at least 70 individuals — were reportedly injured. And according to Mexico's governor, at least 29 people died in the accident. The explosion occurred in Tultepec, which sits to the north of the Mexican capital, at around 2:30 p.m. local time.

From the looks of the scene, the cleanup and recovery process could last several days, stretching into the holiday weekend. Although it's unclear how many people were at the market at the time of the incident, it's reasonable to believe that it was abuzz with patrons preparing for upcoming holiday weekend festivities. Tultepec is know for its fireworks — the National Pyrotechnic Festival takes place there each year. The fireworks display on Tuesday, unfortunately, was tragically deadly.

Photos from what appears to be the market show leveled structures and mounds of debris.

As the smoke cleared, rubble remained. Local residents appeared to gather in clusters at the scene, assessing the damage for themselves. Meanwhile, first responders began search-and-rescue efforts.

Graffiti from a remaining portion of a structure showed the market's reputation for fireworks.

From The Front Lines

First responders had thick smoke and bewildered onlookers to manage as they worked to put out the fire.

In addition to firefighters, reports from local authorities and organizations spoke of the many paramedics who flocked to the scene.

At least three people will be transported to a hospital in Texas for treatment, according to CNN. Meanwhile, search-and-rescue efforts continued at the scene of the incident.

Market-goers can be seen rushing away from the explosion in aerial shots. Little else can be seen through the thick smoke that enveloped the market.

Some of the most remarkable video footage of the explosion was taken from a distance. The video appeared to be taken from a car on a nearby roadway. It shows the flashes and loud noises that went along with the fireworks.

As fireworks added to the explosion, a large plume of smoke was visible over the site of the market. That smoke would be visible in photos from all angles of the scene.

Although it's still early, some photos circulating online after the explosion showed local residents getting to work immediately. The recovery will likely continue for several days at least.

The Tultepec area is no stranger to this kind of damage. In 2005 and 2006, similar fires damaged parts of the open-air fireworks market. Still, the devastating explosion on Tuesday left a heartbreaking haze over the upcoming holiday weekend.