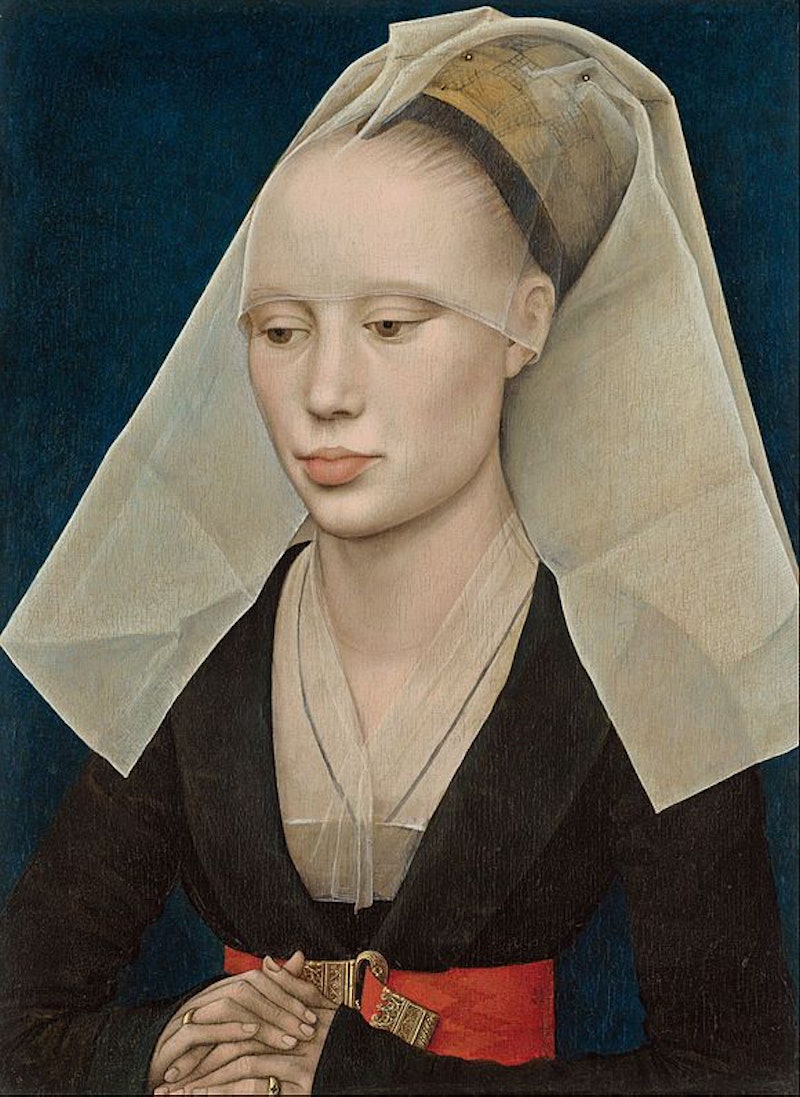 While compacts and makeup palettes might have been rudimentary back then, people still dabbled with pots and paints in the medieval times. But with limited ingredients and the ever-watchful eye of the church, you'd get some really weird beauty tips during the Middle Ages. Like here's-this-arsenic-for-your-face weird.

You would think that rubbing a little lemon on your lips to add some color wouldn't cause such a hysteria, but the pulpit assured its parishioners that, oh, it would. According to Sarah Schaffer, author of Reading Our Lips: The History of Lipstick Regulation in Western Seats of Power, the idea was that makeup hampered with God's vision. To add a little rouge to your cheeks or sneak some fireplace soot onto your lashes was to directly challenge spiritual authority. But like with all things that pertain to women, there was a dichotomy that they were forced to balance on.

For example, according to Thomas Aquinas, a woman needed enough makeup to attract a husband and keep his eye from roving to other prettier church goers, but not so much that it attracted the attention of other men and inspired sinful thoughts. So you should wear makeup, but you definitely couldn't wear makeup. Society: Making standards of beauty for women impossible since the beginning of time.

Here are 10 weird beauty tips from the middle ages that you never knew existed.

1. Use Roots & Berries For Lipstick — But Only Certain Shades

Say you heard all the sermons during Sunday mass against the sins of cosmetics, but still really wanted to add some color to your lips. It wasn't quite as simple as swinging to the corner drugstore and finding your favorite shade. A lot was at stake. "There were laws written to intimidate women into not wearing any makeup. They considered it a form of trickery or fraud to men or husbands, a misinterpretation of what you actually looked like, and therefore a crime," Gabriela Hernandez, author of Classic Beauty: The History of Makeup and founder of Besame Cosmetics, explains to Bustle. "Women were so scared of being imprisoned or killed for witchcraft because of this that the use of any beauty aids diminished tremendously during this time."

But that's not to say there weren't a stubborn few that continued to dabble with their pots and paints. The most common way to add color was to use roots and flowers. "Some items used were berries, beets and a root called alkanet. These items would be mixed with fats to make balms or used raw to rub color into the skin," Hernandez confirms. And there was a bit of leeway when it came to that bit of color: Society ceded enough to turn a blind eye towards lip shades in rose or lily tints because of those colors’ connotations with purity. Just as long as you didn't go too wild with berries and beets, you'd be OK.

2. Get Rid Of Your Eyelashes & Eyebrows — Or Just Make Them Out Of Rodent Hair

Rather than swapping secrets at the marketplace on how to best emphasize and darken their lashes, women just got rid of them altogether. "Women in the 1400s wanted to have high foreheads and an egg-shaped face, with small nose and lips. They saw this as resembling a child, innocent and pure," Hernandez explains. "It was truly a blank face, without much expression, since the hairline was tweezed to be very high and the eyebrows shaved off. The eyes were the only color left on the face, that was mostly pale and round." So if you asked for tips on what to do with your lashes, you'd get handed a pair of tweezers.

However, if you no longer wanted to participate in the fashion but your eyebrows grew back sparsely, it was in vogue to create fake brows out of... rodent fur. "They used mice, or other furry animals in the rodent family to make small hair pieces for brows if the woman over tweezed and the hair did not grow back. This type of hair was replaced later on by human hair that came from the orient," Hernandez shares. The lesson in this: Make sure you know what you're doing with the tweezer.

3. Wear Opal Necklaces In Order To Make Your Hair Blonde

Just because there weren't any drugstores doesn't mean women didn't lighten or darken their tresses. From homemade tints to magic hair-lightening stones, the medieval women had their tricks. Flaxen hair was the preferred shade for women since angels were often depicted as blonde. In order to achieve it, some interesting measures were taken. While some would mix potions of black sulfur, honey, and alum on their head and sit in the sun to lighten their tresses, others reached for opal necklaces. "They believed that wearing an opal necklace would keep the hair blonde. Interestingly enough, later on the opal was associated with bad luck and fell out of favor for a half century," Hernandez says. All you had to do was slip it around your neck and its powers would keep your hair from darkening.

4. Darken Your Hair With Some Mixed Nuts

If you wanted to be contrary and keep your hair dark, then their were plenty of kitchen DIYs that would help you achieve those shades. "There were many home remedies for darkening hair, and most involved roots or nuts that would be cooked and the liquid used to soak the hair. Walnuts and chestnuts were popular hair darkening agents," Hernandez says. You would pile the paste from the roots and nuts on top of your head, keep it in place with a string, and leave it to rot for two days, letting the color soak in.

5. Wear A Wig At Your Own Risk

Remember the mouse hair eyebrows? Those weren't the only faux-hair options during the times. Women also liked to play around with hair extensions to give them more options with their locks, but, as you can imagine, the church had an issue with that. "None to surprisingly, the clergy tried to discourage the wearing of false hair by women by denouncing false hair as the sin of vanity," Stella Mary Newton, author of Fashion in the Age of the Black Prince: A Study of the Years 1340-1365, explained in her book. "Gilles d'Orleans, a preacher from Paris in the 13th century reminded his parishioners that the wigs they wore were likely to be made from the shorn heads of those now suffering in hell or purgatory." That would definitely make some want to discreetly take the clips out of their heads.

Skin was a big deal in the medieval ages — and not just because women strove to have the pale, glowing skin of the presiding Lady Regency. Having any freckles, moles, or birthmarks were thought of as stains of witchcraft: As marks left behind from sexy midnight entanglements with the devil. "Any marks on the body were believed to be evidence of being different, and different meant evil in medieval times," Hernandez shares. Because of that, ointments and recipes to get rid of any and all marks were paramount.

7. Put Oatmeal & Vinegar On Your Face

There were a lot of out-there recipes to fight freckles and blotches, but here are some of the more interesting ones. You could fill a wooden bowl full of the blood of a bull or hare and then apply it like a face mask, which had faint Evil Queen vibes. If you got squeamish at the sight of blood, an alternative was to gather willow tree water to fight any skin discoloration. In order for it to work, you had to wait until the tree flowered, and then slit the bark to gather the water. You then boiled it in wine and drank as much as you needed to. Or if you wanted to do something a little less witchy feeling, you could simply make oatmeal boiled with vinegar, and the unpleasant breakfast was to take away any freckles or spots on your body.

8. Bleach Your Skin With Acid, Mercury, And Lead — Or Just Use The Mixture To Poison Your Husband

If you wanted to whiten your face for fashionable — rather than save-your-life-because-you're-a-witch — purposes, then there were plenty of powder cosmetic recipes available. But they all had a common theme: Poisons.

"White lead was a very popular lightening agent, used in creams and powders. All manner of acids were used to bleach the complexion, like lead and vinegar. Lotions and creams were widely sold to bleach the skin. Most contained mercury, lead, carbolic acid, and mercuric chloride," Hernandez says. Many of these were cut with flour, but after an extended period of use the woman would begin to become sick and disfigured from the ingredients.

But that's not to say that some women didn't use those dangerous ingredients to their advantage. Enter the brand Aqua Toffana, who would intentionally add poison to their powder and sell it to wealthy women who wanted to kill their husbands to get full control of the family wealth. "Aqua Toffana was a liquid preparation sold around 1650 that contained lead and arsenic. It was used by women to kill their husbands or other family members by poisoning their wine or food. If it was blended into powder, it would have also killed the wearer, since this poison can be absorbed by the skin," Hernandez explains. The woman would put it on her face, ask her husband to primly kiss her on the cheek, and slowly poison him with the cosmetic. Talk about the click of a compact case being sinister.

9. Use Blue Ink To Make Your Skin Look Translucent

Even if you didn't have an earl or duke you wanted to kill, being pale was very stylish. So much so that some women would take it up a level and make their skin look paper thin and translucent with the help of blue ink. "The drawing of blue veins onto the skin was a common practice back then since the dresses of the time exposed the chest and bosom. They would whiten the complexion with powders and then draw the veins to make the skin look like it was translucent and pale, so you could see through it. It seemed delicate and ethereal to have translucent skin," says Hernandez. We have contouring and strobing today, and they had vein painting then.

10. Keep A Pouch Of Spices & Cloves Under Your Skirt To Hide Body Odor

The church at the time was very afraid of the naked body and all its temptations, so much so that it urged its followers to avoid bathing in order to keep living a pious life. Since it became common practice to go without soap for months at a time, people had to find clever work-arounds to keep their body pong at bay.

"The wide use of perfumes and aromatic spices is due to the fact that people did not bathe very often in the past. They would use pomanders, or dried oranges stabbed with cloves, to hang on the dress skirts to keep odors at bay," Hernandez explains. "Fragrant spice sachets would be tucked in several places in the body, in the bosom, under arms and skirts. There were even extra cloth pieces that could be removed once they were soaked with sweat under the armpits of fancy ball gowns." Just because bathing wasn't an everyday occurrence didn't mean that women had to smell.

From wearing opal necklaces to lighten hair to drinking the water of a flowering weeping willow to fight acne, there were a lot of interesting beauty tips in the Middle Ages. It's a good thing fads change yearly, or else we'd still be fighting freckles with bull's blood.