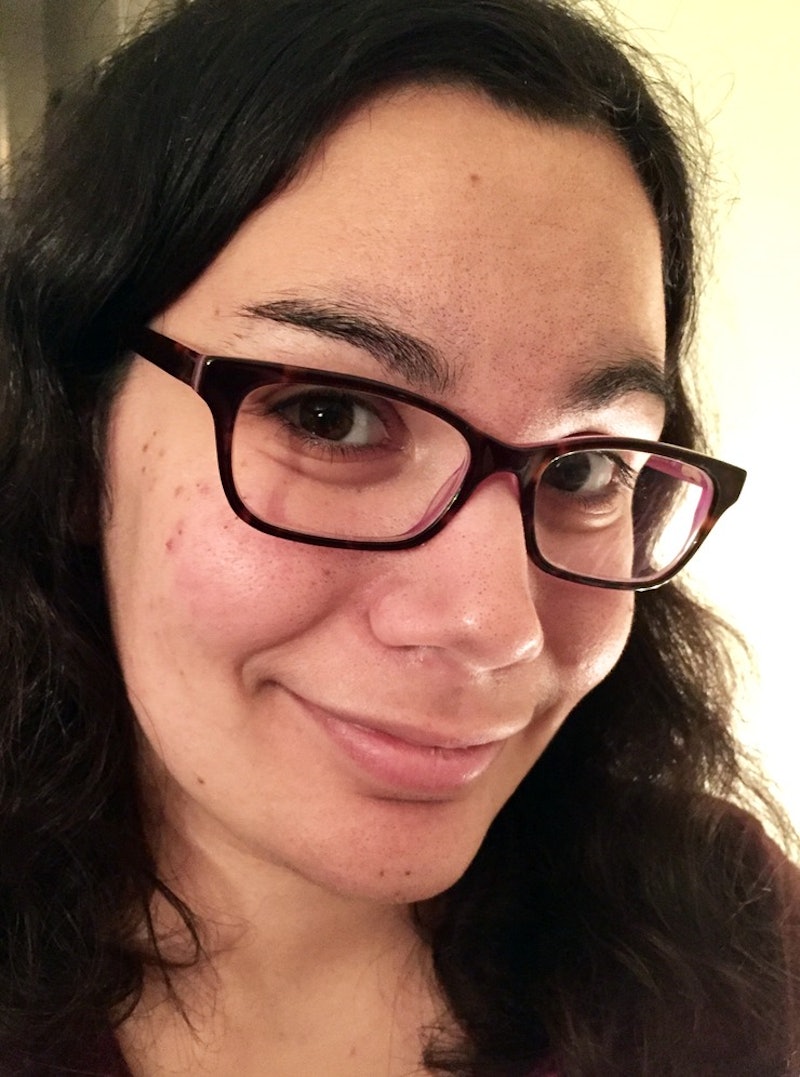 There’s something destructive that I do to myself every day. It’s so ingrained in me that, most of the time, I don’t even realize I’m doing it. It doesn’t matter where I am or what’s going on. I suddenly feel my fingers picking at the skin on my face. And I can’t stop.

I struggle with a condition called dermatillomania. It’s a body-focused repetitive behavior (or BFRB) that causes me to inadvertently pick at my skin, sometimes for hours at a time, often without any awareness that I’m doing it. My compulsion is focused on my face, but I also pick on my scalp, neck, and chest. Whenever I tell people about my picking, they almost always say the same thing: "Why don’t you just stop?"

To most people, skin-picking is seen as a habit to break; a minor nervous tic, like occasionally biting your nails. I try to explain to them that I’d stop if I could. In fact, every time I feel my fingers on my face, I tell myself to stop. But I can't stop.

I find the picking comforting. It calms me when I’m anxious or worried. Sometimes, in the moment, I realize I’m doing it and that I could technically stop — but I don’t want to because it feels like it's helping me. I know there are better ways to deal with anxious feelings, but this is the compulsion I’m used to, the one that makes sense to me.

I’m not exactly sure when I started picking at my skin for hours every day. It probably began as an innocent and misguided attempt to remove newfound blackheads and blemishes from my teenage face. Somehow, as time went on, the picking turned into a compulsion that I completely lost control over. I was diagnosed with generalized anxiety disorder as a child, and obsessive compulsive disorder as a teen. Now in my late twenties, I still get constant acne breakouts, worsened by the bacteria and oil my fingers add to my vulnerable skin.

The DSM-5 characterizes dermatillomania as an “obsessive compulsive and related disorder.” According to The TLC Foundation for Body-Focused Repetitive Behaviors, at least two out of 50 people suffer from some form of BFRB, which can include trichotillomania (hair pulling), nail biting, and skin picking. When it comes to dermatillomania as a diagnosis, The TLC Foundation estimates that 2-5 percent "of the U.S. population pick their skin to the extent that it causes noticeable tissue damage and marked distress or impairment in daily functioning."

Dermatillomania cases can range from mild to severe. Some people develop large lesions and dramatic scarring. My case falls somewhere in the middle, but it impacts my appearance and day-to-day life in very real ways. My compulsion leaves infections and scars behind, many of them permanently etched into my face.

Nothing else I can pick at or play with compares to the relief I get when I pick at my face. It’s like scratching an itch. It soothes and calms me in a way that other things just can’t.

I’m very self-conscious when it comes to my face. Although I’m not someone who tends to wear other makeup, foundation is my constant companion, especially when it comes to professional situations where I don’t want my acne and scarring to make me look like an awkward teenager battling the ravages of puberty. I try to hide the pimples and the scars, but they go deep into my skin, creating crevices and pockets that will likely never disappear.

I hate feeling like a perpetual teenager with a bad complexion. I’ve had dermatologists scold me for the condition of my skin. The one time I got a facial, I was shamed for having “terrible skin,” and they spent hours excruciatingly removing blackheads on my already-sensitive and scabbed face. Whenever someone gets close to me, I imagine what they’re seeing: The pimples, the scabs, the scars, the pores. So many imperfections all over the part of my body that people see most.

But despite the knowledge that I’m hurting myself and my appearance, I can’t seem to stop picking. Without thinking, I constantly find my fingers moving over my skin, seeking blemishes and blackheads to pick at. When I catch myself picking my face, I often make the connection that the behavior is being triggered by anxiety, stress, or boredom.

I’ve brought this problem up with many therapists over the years. None of them have been able to help me in any significant way. They typically approach it like everyone else, asking me why I do it, then telling me to be aware of it and to stop myself when I notice that I’m doing it — as if that’s something I’ve never tried. Often, I tell myself I need to stop — but the habit has been going on for so long now that I’ve tried too many times without success. I get discouraged before I even start, and feel helpless against the compulsion.

Therapists have also suggested putting a bracelet or rubberband around my wrist to play with, or keeping a stress ball with me to squeeze. The goal is to redirect the picking away from my body and onto an external object. But even when I’m wearing a rubberband or have a stress ball nearby, my fingers still go for my skin. Nothing else I can pick at or play with compares to the relief I get when I pick at my face. It’s like scratching an itch. It soothes and calms me in a way that other things just can’t. Even during times when my anxiety isn’t high, I still find my fingers picking at my face.

I don’t want people to notice my picking, and when they do, it feels like getting caught doing something wrong or disgusting. When my boyfriend first noticed my picking, he’d move my hand away, or ask me to stop. It was a natural response to what I was doing, but it made me feel like a child being scolded for acting out, and it made me angry.

With my feedback, he now gently touches my hand whenever he sees me picking. It brings my awareness to the behavior, and prompts me to stop without his having to say anything. It was embarrassing at first; having to admit my compulsion to him felt like having my dirty secret constantly put under the spotlight. I was afraid he’d be like everyone else and expect me to stop right away. Thankfully, he understands that it’s more complicated than that.

Any kind of compulsion is difficult to eradicate — especially one that's been around for years, if not decades. As of now, there are no FDA medications approved for BFRBs. Thankfully, organizations like The TLC Foundation and BFRB Awareness Week are bringing much-needed light to this issue. If you suffer from a BFRB, you can participate in the conversation with the hashtags #BFRB and #NotAlone. Together, we can shed new insight on this disorder and, hopefully, bring about new and innovative treatments to help those struggling with it overcome the compulsion.

In the meantime, I’ve tried to accept that this is a disorder, and I’m doing my best to work on it. I can’t “just stop” picking my skin, but I can try to be aware of when I’m doing it, and find other ways to manage the thoughts and feelings that are feeding the compulsion. I continue to seek therapy, practice meditation and relaxation techniques, and do whatever else I can to manage my anxiety.

Often, when I’m feeling self-conscious about my skin, my boyfriend reassures me that he doesn’t see any scars or scabs.

“I just see your face, and you’re beautiful,” he says. I don’t believe him when he says it, but I appreciate the sentiment.