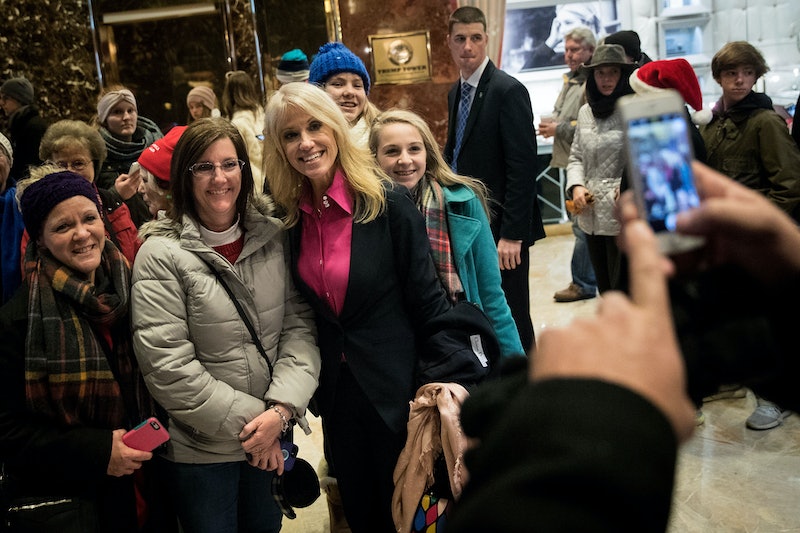 It's hard to imagine Donald Trump's presidential campaign would end with a woman shattering a glass ceiling of her own, and yet it did. With Trump's Electoral College win, former Trump campaign manager Kellyanne Conway became the first woman in U.S. history to head a victorious presidential campaign. Conway is now slated to become the highest-ranking woman in the White House, Trump's transition team having named her counselor to the president on Thursday. Although her appointment to Trump's senior team is far from surprising, it has sparked an interesting debate over the nature of Conway's feminist values. While Conway has made impressive gains for women, it takes more than personal success to make Conway a feminist hero.

In a column for the Toronto Sun, Melissa Lantsman argues Conway is "the hero feminism ignores," citing her membership in the Republican Party as the main reason for why she has been overlooked by the feminist movement. Julie Kelly presents a similar argument in an op-ed for The Federalist that argues Conway is the answer to the question "'what to tell our daughters about the 2016 election."

Though it's difficult to compare Hillary Clinton and Conway, Kelly goes on to claim Democratic voters are too preoccupied with the former secretary of state's loss to acknowledge Conway's success.

I'd argue that it's not Conway's political affiliation that will keep her from being defined in history books as a feminist hero, but rather her words and actions. Feminism is in no way a liberal-only space. Like women, modern-day feminism comes in many shapes, sizes, and colors. But while there's more than one way to be a feminist, it takes more than success to become a feminist hero. Although Conway's accomplishment as the first female to lead a successful U.S. presidential campaign (all while raising four children) should be applauded, it doesn't automatically qualify her for entry into the feminism hall of fame.

Politics aside, feminism means advocating for the equality of all women, even those who don't reside in the same socioeconomic class or political sphere as you. And some argue Conway has failed to stand up for women by standing alongside a man who has been accused of sexual assault (Trump has firmly denied those allegations), has gone as far as to call his opponent a "nasty woman," and has expressed the desire to overturn Roe v. Wade. And that's just the beginning of Trump's record with women.

Trump isn't the only man Conway has worked on behalf of who has expressed some less than savory ideas on women's issues. Conway's resume includes stints with Mike Pence and Todd Akin, according to Jezebel; the latter candidate ran for the Missouri Senate and made headlines with his use of the phrase "legitimate rape."

While Conway may be a role model for the country's conservative women, it doesn't appear as though she's as kind to women who don't share her viewpoints. After it was reported she'd made comments that seemed to suggest mothers shouldn't take jobs in the White House, Conway lashed out at the women criticizing her, suggesting they were childless cat ladies. "A lot of women who have attacked me are either childless interns born in the 1990s or 2000s, or I've noticed, women who have cats as their Twitter pictures," Conway told Fox Business Network's Stuart Varney in an interview on Dec. 16.

Moreover, I wonder if Conway would even choose to describe herself as a feminist, let alone a feminist hero. During a speech to the Conservative Women's Network in 2011, she argued that "femininity is replacing feminism as a leading attribute for American women." She suggested feminism was "a drag" and characterized feminists as being "in a bad mood all the time." Conway went on to argue feminists are suspicious and revolted by men generally. "I challenge anybody to show me where that is not part and parcel of the feminist movement," Conway said. "That has absolutely been a cost of admission into the feminist movement."

Though Conway's successes deserve to be congratulated — and indeed broke a glass ceiling of their own — the fact remains that she advocates for politicians looking to scale back women's reproductive rights and have voiced only tepid support for things like equal pay and paid family leave. When it comes down to it, women would love to see at least one progressive feminist in Trump's administration. It would be great if Conway were that woman, but the values with which she associates are difficult to reconcile.