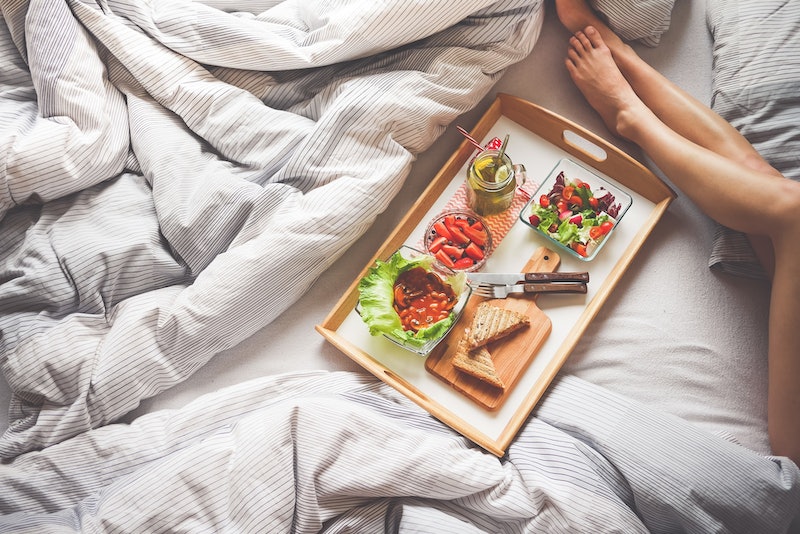 Most people would love to have a fast metabolism, but in addition to getting your body revved up while you're awake, it would be great to also have it burning when you're asleep. There are a number of ways to keep your metabolism higher when you're sleeping, and it just requires a little extra prep before you head to the bathroom to brush your teeth for the night. Although you won't be able to drastically alter your metabolic rate, a few habits can help kick up your metabolism while you're dreaming away.

"When people talk about metabolism, they are basically talking about our body converting food into energy and how many calories your body burns during this process," says says Dr. Candice Seti over email. "Just about everything can impact our metabolism, from diet, exercise, and lifestyle, to genetics, gender, and body composition."

What you do during the day can also affect how much you burn at night, so making certain choices before bedtime can have an impact on your metabolism later on. If you want to burn more while you slumber, consider these nine ways to get your metabolism higher when you're sleeping — plus they'll help during the day too!

1. Stick To A Consistent Sleep Schedule

"Our metabolisms can definitely get a boost throughout the night in some of the same ways that we can boost it during the day, but the single most effective thing we can do is get plenty of good sleep," says Seti. "Sleep deprivation or irregular sleep patterns have been linked to increased snacking, increased cravings, lower metabolism, lower willpower for junk food, increased stress levels, lower insulin sensitivity, and less fat burning."

2. Add Cayenne Pepper To Your Dinner

Time to give your dinners a spicy kick! "Cayenne pepper contains the compound capsaicin that is known to boost metabolism, causing the body to produce extra heat and burn more calories for fuel," says Dr. Taz Bhatia over email. "Add the spice to your dinner to keep you metabolism going through the night."

3. Split Up Your Workout

Instead of just doing a morning workout, split it up and do 20 minutes in the morning and 20 minutes in the evening. "This will rev up your metabolic rate twice per day, keeping it constantly elevated," says Bhatia. Just make sure you don't exercise too close to bedtime, as it might disrupt your sleep.

Get out that blanket, because you're going to want to turn down the thermostat. Research published in the journal Diabetes found that subjects who spent one month sleeping in a cool environment overnight (about 66 degrees) showed a 10 percent increase in fat metabolic activity as well as significant changes in metabolic hormones such as leptin and adiponectin. "Try lowering the thermostat before bed or sleeping with a lighter blanket," says Seti.

"Staying properly hydrated allows the body and metabolism to operate at an optimal rate," says Jennifer Christman, RDN, LDN, corporate dietitian at Medifast over email. "Plain water is best, and aim to drink at least 64 ounces —or 8 cups — per day. You may need more if your activity level is high."

A study from the Pennington Biomedical Research Center found that subjects who ate a normal- and high- protein diets stored 45 percent of their excess calories as muscle, while those on a low-protein diet stored 95 percent of their excess calories as fat. "A meal rich in protein will help you feel fuller, longer," says Christman. "Eating-high quality, lean-protein before bed can boost your metabolism and stimulate muscle growth and repair post-exercise."

"Short bursts of high intensity-exercise provide the benefit of burning calories for hours after your stop working out," says Christman. "Exercise post oxygen consumption (EPOC) is the body’s ability to return to 'normal' after exercise. The total calories burned during high-intensity exercise are greater in EPOC than with continuous exercise. This benefit is especially beneficial for your metabolism if you are short on time."

8. Sip On Some Green Tea

A study from the American Journal of Clinical Nutrition found that green tea can raise metabolic rates and speed up fat oxidation. "The fat burning properties of green tea are due to the high concentration of catechins, a family of powerful antioxidants," says Bhatia. The effects can be small from just one cup, so try to have three cups during the day to help boost your metabolic rate even when you're sleeping — just don't load up on caffeine too close to bed time!

If you're looking for a dessert or a midnight snack, consider eating a grapefruit. A study published in the Journal of Medicinal Food found that insulin resistance was improved with eating fresh grapefruit. Insulin plays a major role in metabolism, so eating a grapefruit can help with your metabolic function.

These small tricks might have a small impact, but together they can work to boost you metabolism when you're both awake and asleep.