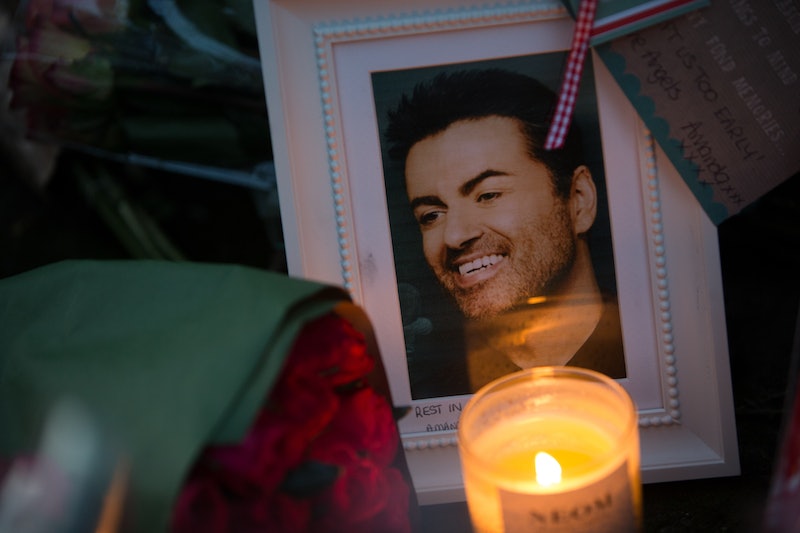 A singer named George Michael was my first real crush. He and Patrick Swayze arrived at about the same perfect time, when I was poised just at the cusp of childhood and adolescence. I was a French-braided, uniformed Catholic schoolgirl when they emerged onto the scene. Their raw sexual energy, their passion and desire the antidote to what I was being fed all day, which was the idea that the body was sinful, a problem to be solved rather than a blessing to be enjoyed.

I remember my mom picking me up from the carpool line at my all-girls Catholic elementary school and then flipping on the radio and hearing the opening guitar strums of “Faith” punctuating the air. I had the first bars of “I Want Your Sex” memorized — so I could make sure I quickly switched the radio dial when that song came on, because it had the word the word "sex" in it. I always blushed from that near miss. George Michael was exhilarating and somewhat scandalous. But I knew all the words to all the songs on Faith. Every song was about bodies — how nice it would be to touch bodies, bodies pressing up against one another, sex as natural and fun.

At the same time, I was being actively indoctrinated in the concept of sex-as-sinful — except in very specific circumstances. “Faith” and “Father Figure” and, later, “Freedom” activated my curiosity and, although I wasn’t aware of it at the time, offered me an alternative: liberation from the limitations of religious morality. As a little Catholic girl who was also very curious about the woman I would soon be growing into, his music provided a passionate preview, a glimpse into desire I did not yet fully understand but wanted to. He made that desire allowable.

It wasn’t just that he offered the opposite of my Catholic experience, but that he repurposed the very symbols and language of faith and Church, transforming these into something else. In the “Faith” video — a song not about faith in God but in romantic, sexual love — he not only stares into the camera with a single cross earring dangling from his ear, but opens the video with a church organ playing, as the camera rises up his denim-ed legs to focus at the climatic note on his butt.

I didn’t entirely know what was happening; only that my body was activated when I watched.

In “Father Figure” (and many ensuing songs), a full gospel choir backs him up. I was accustomed to hearing a soulful chorus of voices raised in song but only in praise of Jesus or one of the other members of the trinity. The father figure here is not Our Father — the all-knowing, almighty, sometimes loving, sometimes vengeful creator of the universe — but George himself. And when he sung, That’s all I wanted, something special, something sacred, in your eyes, suddenly the possibilities for the sacred expanded.

I watched MTV perched up on my elbows in a bedroom at my grandma’s house — because we didn’t have the channel at home — and I remember checking to make sure she wasn’t coming down the hallway when his music videos came on. Particularly “Freedom,” which was brimming with sexual tension. I didn’t entirely know what was happening; only that my body was activated when I watched.

As a shy, sensitive kid, music was a huge part of the way I processed the world. I listened with my whole self, absorbing and integrating new ways of seeing and understanding. I was a perpetually worried kid. And being raised within the Catholic church — full of constraints and limitations, self-sacrifice, and self-flagellation — didn’t help with this. I didn’t often feel like there were spaces for me to be myself. To exist. But there was space in music. Now, I recognize the musicians who provided the aural backdrop to my childhood as a consortium of mentors. They not only provided melodies that permeated me, but an appreciation of music — particularly singing — as a way to make space for an emotional experience that sometimes felt too much to bear within my small self.

On the night of Christmas and the day George Michael died, I watched his videos for hours. One of the other singers I think of from that era who was a kindred performer, who had that same sensation in her voice is Whitney Houston. I sung “One More Try” at the top of my lungs in the same way I sang “The Greatest Love of All," with the ecstatic energy they demonstrated to me. Full power. No holding back.

What I didn’t know, until I fell down the Youtube rabbit hole, was that the two of them had collaborated on a song in 2000. George and Whitney spend the video alone on opposite sides of a club, staring and singing directly into the camera until they face off on the dance floor at the end — vocalizing in ways that animate their entire bodies, a sort of sway towards and away from one another. It is not battle but a collaboration between equals, each of them singing with complete and utter presence.

My all-time favorite song of George Michael’s is “One More Try.” Listening to it last night for the first time in years (maybe a decade), I immediately felt it in my body and connected with that nine-or-10-year-old version of myself who —at such a young age — resonated so deeply with this song of heartbreak and desire.

“One More Try” is about the lessons we learn, those we seek out and those we try to run from, in life and in love. The tension of the song culminates in the chorus when he sings: I don’t want to learn to hold you, touch YOU-OU, think that you're mine. There was so much behind that you, the switch in register and longing resting on the top of that note.

George Michael pulled you into the song with him. He had the “duende” Federico García Lorca wrote about: “I heard an old maestro of the guitar say: ‘The duende is not in the throat: the duende surges up, inside, from the soles of the feet.’ Meaning, it’s not a question of skill, but of a style that’s truly alive: meaning, it’s in the veins…”

I sometimes think about what the world would be like if we didn’t have particular songs, if particular musicians had decided instead to be accountants or lawyers or if their music didn’t make it into mainstream and into our lives. I cannot think of my childhood and adolescence without George Michael. His words and soulful voice are threaded through. I loved him. I am grateful for what he gave me. And I know I am not alone.