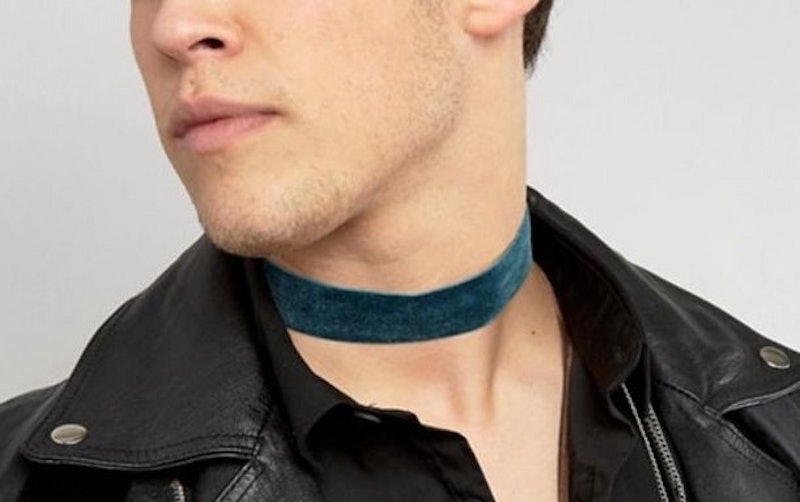 On Jan. 3, I saw the news start to circulate: Online retailer ASOS began selling chokers for men. The mere facts didn’t disturb me — but the reactions to it did. “ASOS is selling chokers for men and people can’t handle it,” read one headline from Metro. “Stop trying to make men’s chokers a thing,” quoted the DailyMail. Even Perez Hilton, a fellow man, published an incredulously-toned survey on his site, entitled “Would you wear this men’s choker???” Jake Woolf penned a GQ piece entitled "Stop Men's Choker Necklaces Before They Start." Matt Lauer even wore one on The Today Show, and though he didn't specifically chastise men for wearing chokers, the whole thing felt like a stunt.

Forgive me for having no sense of humor about this, but the scandalized reactions reminded me that despite all the progress that gender fluidity has made in fashion, we’ve still got pretty far to go. Remember Fashion Week last fall, when everyone was applauding Hood By Air for turning gender norms on their head? Or a couple months ago, when all your favorite fashion people were wearing the new unisex line from Guess? Or when Young Thug showed up on the cover of his Jeffrey mixtape in a dress? Or what about the last year when everyone was walking around wearing literal BDSM chokers as casual daytime accessories? All of those things felt like celebrations of progress, but the reactions to ASOS offering something as “shocking” as a choker for men — well, that makes me feel like we haven’t moved an inch from a watered-down "pants are for men, skirts are for women" mentality.

More importantly, the headlines could have more insidious consequences. Think about it: Even after this makes its way out of the viral news cycle, all of these snide and/or incredulous articles are going still going to be there — nothing dies on the internet. What happens when a boy in high school thinks to himself, "You know what would really make this outfit? A choker," then goes to search for where to buy one and sees all of us going off about how silly it is for a man to want to wear this particular type of necklace?

Worse yet, imagine if someone who is still trying to determine which gender best suits them, all the while relying heavily on fashion to express themselves and the way they feel that day. What happens when they see a little piece of fabric around your neck, traditionally "for a girl," could cause such a riot if worn by a man?

Simply put, if someone goes to bed feeling more feminine and wakes up feeling more masculine, or vice versa, there's absolutely no reason why those feelings should be further complicated by something as small as an accessory.

When things like #ChokerGate (what I'm calling it) happen, it’s important to remember that words and actions go far beyond ourselves. That stupid tweet about a choker that you’re not even planning on buying could be harmful. Fashion is important for a thousand different reasons, most of them, extending far beyond what we’re wearing that day to keep us warm. Words carry weight, and what’s a joke to you may make someone else feel confined in their own body.

Mostly, I’m saying this because I have been that person. Yes, the one whose dumb joke made someone else feel like they couldn’t be themselves (apologies). But also, the person who felt like they couldn’t wear a certain accessory for fear of what people would say or compromise my masculinity — the same masculinity that people told me I didn’t deserve in the first place.

When I learned that being on either side doesn’t feel good, I learned to get out of people’s way entirely, while equally expecting them to get out of mine. Oh, you don’t like my Givenchy top that makes me look like a Dementor in a sports bra? Cool. I didn’t ask. No matter what they are wearing, people always look best when they’re comfortable and love how they look. If you can’t applaud someone for doing them, that has more to do with you than anything else. Let’s all mind our own business while looking awesome doing it.

So go ahead, all boys, men, and literally anyone else. Wear those chokers. You look amazing, and don't let anyone tell you otherwise.

More like this
I Have Eyebrow Alopecia – & Microblading Gave Me My Confidence Back
By Jessica Morgan
Yes, You Can Buy Off-White’s New Beauty Range In The UK
By Tomi Otekunrin
10 Show-Stopping Manicures From The 2022 BET Awards
By Paris Giles
35 Ideas For 4th Of July Nails That Go Beyond Red, White, & Blue
By Audrey Noble
Get Even More From Bustle — Sign Up For The Newsletter