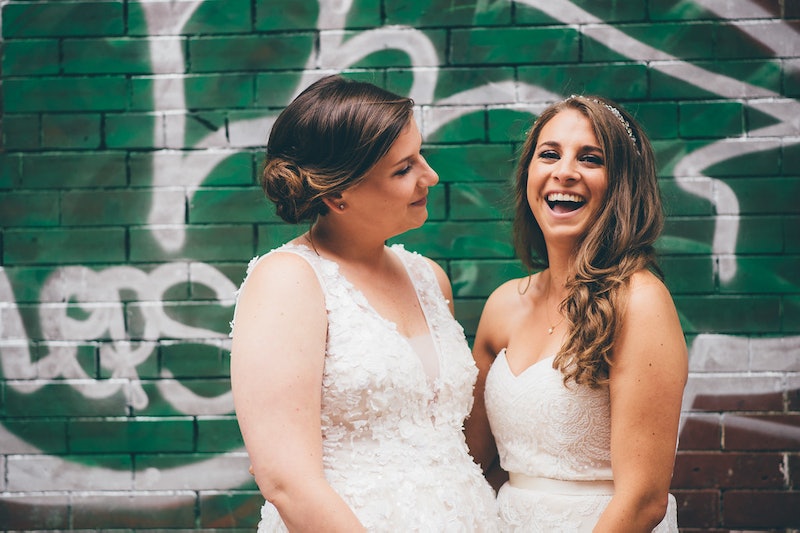 The first time I noticed my wife was at our sorority pledge class meeting. She was one of the few girls who consistently aced our weekly tests and always volunteered for upcoming events. I assumed she was a straight-laced nerd. I rolled my eyes as she rattled off the Greek Alphabet perfectly a week before the auditory test was due.

The first time I spoke to my wife was at our sorority's Halloween party. Five of us pledges had dressed up as Mad Dog wine coolers (an homage to the sisters who actively hazed us with these noxious drinks). I needed help pinning my dress, and she was the only one around who was not applying mountains of makeup or re-curling her hair. The bathroom sizzled with bad lights, blow dryers, and girls chattering, so the two of us stepped into a bedroom to cool down and complete my outfit.

It was the first time we had ever been alone. I didn’t want to like her; she was making all of us look stupid every week at our meetings. But it quickly became obvious that hating her would be tough. Her humor was biting, her neuroticism apparent, and she was silly in a way most adults have forgotten about. A sudden charge moved from the bottom of my toes to the top of my head as she carefully safety-pinned my dress and chatted away. I felt flustered. She kept her hand on my thigh as she fidgeted the safety pin in place just right. I held my breath and felt my heartbeat quicken. I felt the weight of her hand and I tried to stand still. The rest of the night, we were inseparable. I don’t recall talking to anyone else at the party. I only remember standing around the keg, staring at her, and memorizing every word she said. After the party we were forced to separate due to obligations with various friends.

“Don’t leave,” I said, in all seriousness. She was headed out for taquitos with another pledge sister.

“I wish I didn’t have to,” she said with complete sincerity.

When I came home that night, I wrote on her Facebook wall: I am completely obsessed with youuuu!!!!

I then attentively scrolled through every photo on her Facebook account, twice; I was searching for any details. I knew she didn’t have a boyfriend at the moment, but wanted to see if anyone looked important from her past. It was primarily photos of her and her friends. She was well-groomed and preppy, with not a boy in sight. I felt relieved.

That year, she always wore her hair half up with a front bump. I was smitten.

Starting the next morning, we began spending all of our time together. We let most of our other obligations and friendships fall to the wayside. My best friend, understandably, began to hate me for ditching her practically overnight. But I couldn’t help it! Being around my wife was the most addictive thing that I had ever experienced. We spent the next months learning everything about one another in meticulous detail. I couldn’t get enough information about her. I loved watching her interact with the world around us. I’d never met anyone like her before.

She has the moral compass of a nun and an outrageous amount of self-respect — foreign concepts to me. I once saw her find a $10 bill and then hand it to a homeless townie.“We could have bought two forties and a pizza slice with that!” I whined. She never skipped class and wouldn’t even sneak cookies out of the dining hall. “It’s stealing,” she would say. I would laugh and take two.

One night, a group of us sat in a frat house, passing around a Frisbee full of cocaine. Making a disgusted face, she handed the Frisbee to the next sister. Peer pressure left her unmoved while I prayed for it; I craved any excuse for more. More drugs, more drinks, more meaningless sex. We were fascinated by our asymmetry.

We had opposite types of emotional baggage. Her family baggage caused her to be shut off to any romantic entanglements, while my childhood trauma had me seeking out empty sex and various other forms of self-harm. We presented ourselves to the world as opposites. I was gregarious and open for anything, while she was shy at first and only participated in activities that felt right for her. She knew how to listen to her mind and body, and I found that both incredible and attractive (to this day, I continue to struggle with listening to what my body is trying to tell me).

Slowly, we started to patch up our own emotional cracks with each other’s help. Being around her made me begin to feel whole.

We found out, however, that while we appeared different, our insides were identical. We were both a bit broken, angry, and mistrustful of people around us. Slowly, we started to patch up our own emotional cracks with each other’s help. Being around her made me begin to feel whole.

The first time I tried to kiss my wife, she shut me down. She shut me down so hard, I began thinking all of my romantic feelings were imagined. I no longer wanted meaningless guys and hookups. I wanted her. We had never talked about being gay, but she emitted all the signals. She sent sweet, flirtatious texts, was aggressively affectionate, and never even looked at or mentioned guys.

An older sister in our sorority called us "dykes;" behind out backs, of course, and to this day, I can still feel that specific sting. We weren’t even dating when this happened, but people could easily sense something undeniable brewing between us. We spent the years we were not-dating listening to Amy Winehouse, eating bagels, drinking bottles of lime-flavored vodka, dancing in frat basements, and watching America’s Next Model snuggled up in bed. I slept at her house five nights a week, and our bodies inched closer towards each other as the months passed.

Two years in, our relationship starting feeling complicated. Her bed was the only place I wanted to be. It got to the point where I would have sex with a guy, kick him out, and then arrive at her house 30 minutes later to sleep. This was expected. Where are you? she would text me if I hadn’t made it to her house by 2 a.m. The sex I was having with guys began feeling uncomfortable. I began to hate how they smelled and how rough their skin felt against me. A new routine formed where I would shower manically after they left and immediately throw my sheets in the wash. I wanted to wash the experience off of myself and my things. Their masculine scent was difficult to get rid of. However, no amount of scrubbing could wash her out of my system. I was going insane.

During senior year, her true feelings for me became harder for her to repress. She became a calculated cock block; taking my phone when she knew a guy was texting me, and luring me to her apartment with promises of late-night pizza. I feigned annoyance, but secretly loved her obvious intentions.

At our third Halloween party together, this time dressed up as characters from Mario Kart, we got boozed up and finally kissed. We kissed for months. It was the most comfortable I had ever been with another person. I remember eating clementines in her kitchen at 3 a.m.; we were starved from all the kissing. I had never been happier. It’s bizarre to start dating someone you already know deeply and have spent massive amounts of time with. We had been out to dinner hundreds of times, but now these dinners were dates. Secret dates. Everything was a secret. We tried to convince ourselves that we were just L.U.G.’s (lesbians until graduation). We planned to end it. We didn’t stop dating, however. We couldn’t stop kissing long enough to ever break up.

This past July, six years after we started secretly dating, we publicly got married. The wedding was beautiful and intimate. It was a night neither one of us dreamed we would ever have. The girl who called us "dykes" recently held a fundraiser for Donald Trump. She’s working hard to make America white, straight, and Christian again. However, most of the women in our sorority have been supportive, even if only through Facebook/Instagram likes. Also, as far as I know, we’re still registered Sigma Kappas — I’ve read our handbook numerous times and have never found anything explicitly noting that you can’t marry a sister. We thought that maybe, someday, we'd get a letter from the board asking us to send back our pins and de-register... but so far, so good.