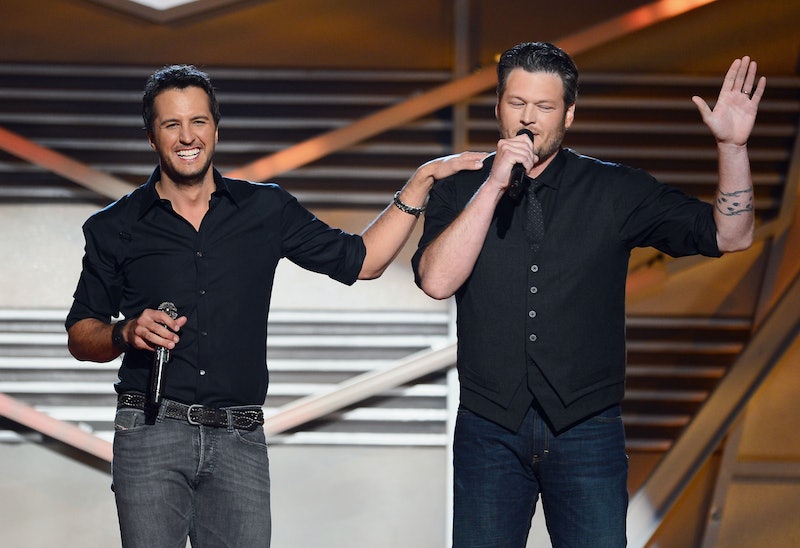 The Academy of Country Music Awards are this Sunday, so it's time that you slipped on your best pair of cowboy boots and practice your best Southern drawl. This year Blake Shelton and Luke Bryan are hosting the ACMs, which means that we're in for one awesome show. But are the duo — affectionately nicknamed "Bluke" by fans — really friends outside of the country world? It sure seems like it. In fact, the two buddies even interviewed one another on Entertainment Tonight , and the results are hysterical — as is expected whenever these two get together. They definitely play off one another when it comes to the jokes throughout the night — just like any two friends would. (One person they'd like to take a jab at? Justin Bieber!)

The show is lucky to have nabbed these two country crooners to host the ACMs — they're definitely two of the biggest names on the scene. Luke Bryan was recently crowned the ACM Entertainer of the year, while Shelton already has four ACMs under his belt. The two may both be vying for top spot on the country hits list, but it seems like there's only good vibes between these two. Bryan insists that the ACMs will be a great time for any country music fan, and he's excited to share the stage with Shelton. Honestly, we would be too — since his time as host of The Voice, we've really gotten to see a fun side of Shelton. When he's paired up with his bud Bryan, the only thing we're down to expect for the night is to have an awesome time.

More like this
Linda Ronstadt’s “Long Long Time” Plays A Pivotal Role In The Last Of Us
By Brad Witter
This 'Emily In Paris' x Blackpink Crossover Is Beyond Iconic
By El Hunt
Yes, 'The Price Of Glee' Is Available To Watch In The UK
By Catharina Cheung
Taylor Swift Visited The 'Glee' Set For This Bizarre Season 5 Episode
By Grace Wehniainen
Get Even More From Bustle — Sign Up For The Newsletter
From hair trends to relationship advice, our daily newsletter has everything you need to sound like a person who’s on TikTok, even if you aren’t.