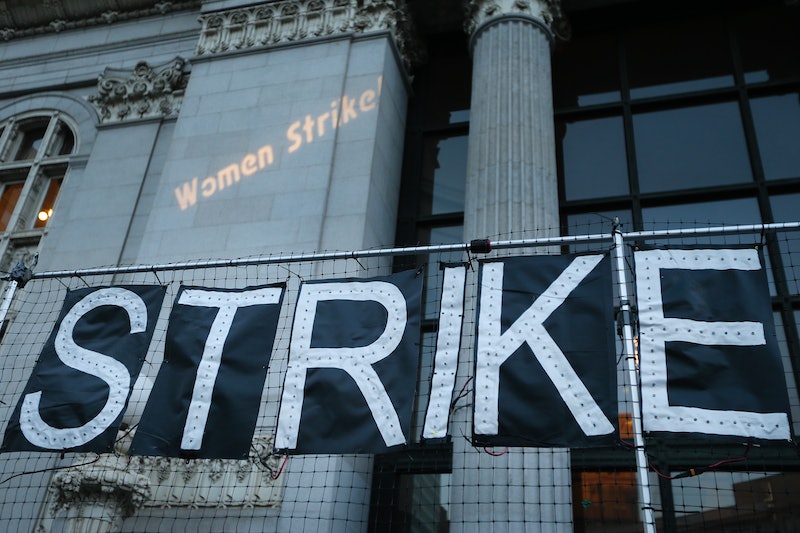 We're living in turbulent times, when few things are clear — except the need to mobilize active resistance. If you're opposed to the Trump administration's goals and legislation, figuring out exactly how to stand up and make yourself heard is key. A number of protest movements are coming together — from the Women's March on Washington (which some are reporting to be the largest national march in history) to many other local protests and collective actions designed to oppose the administration's immigration orders, restrictions on transgender people using the bathroom consistent with their gender identity, and other policy. But in making sure that all of that energy is focused for maximum impact, we need to plan. How do you build a protest movement that not only lasts, but increases visibility for the issues? How do you make sure that your protest movement yields real results? To help answer these questions, we can look to protest groups and movements of the past that created monumental changes for human rights.

The AIDS Coalition To Unleash Power formed in the mid-80s, in response to governmental ignorance of the HIV/AIDS crisis. ACT UP's major concerns were with gaining governmental recognition of the AIDS crisis and increasing widespread access to the drugs needed to treat it. In New York City alone, ten thousand people had contracted AIDS and become sick by 1987; half of those people had died — without the federal government once acknowledging the disease and its casualties. Experimental AIDS drugs existed, but the prices were exorbitantly high and thus unattainable for the majority of those who suffered from the disease.

Though the origins of ACT UP had been percolating before this moment, the oft-cited beginning of the resistance was a speech Larry Kramer made at the Lesbian and Gay Community Service Center of New York, in which he " challenged the gay and lesbian movement to organize, mobilize, and demand an effective AIDS policy response."

The group's first large-scale action was a march on Wall Street in 1987, to protest pharmaceutical companies profiting from AIDS by charging unnecessarily high prices for experimental drugs. Protests of this nature continued and escalated as ACT UP members developed new ways to garner both governmental and media attention — in 1989, seven ACT UP members snuck into the VIP balcony of the New York Stock Exchange and chained themselves to the balcony, unfurling a banner that read "SELL WELLCOME." The banner referred to Burroughs Wellcome, the distributor of AZT, the only AIDS drug that approved by the FDA at the time. The company priced the drug at $10,000 per patient per year, making it inaccessible to many living with the disease. The protest worked — within the week, Burroughs Wellcome nearly halved the price of the drug, to $6,500 per year.

In the majority of the successful ACT UP protests, the members targeted a specific governmental or economic power that had agency over AIDS drugs and regulations. In another history-making protest, members of ACT UP shut down the Food and Drug Administration by overtaking the building to the point where business could not continue.

ACT UP had a short list of actionable goals that they wanted out of this protest: shorten the drug approval process, end the use of placebos in trial studies, include diverse populations in clinical trials, let both Medicaid and private health care cover experimental therapies, and increase support of community activism groups.

In the year following the FDA takeover, both the FDA and the NIH began including AIDS activists in their policy-making decisions. The FDA also approved an ACT UP plan for revising and improving clinical trials, and a second antiretroviral drug was approved for widespread use.

The protest was successful because the activists had gained an intimate knowledge of how the FDA worked, and therefore knew what steps it would take to make their specific demands manifest. Additionally, ACT UP prepared the media to properly cover the event by distributing the knowledge that its members had accumulated in press kits to reporters prior to the protest.

The most pivotal and inspiring feature of the ACT UP movement is that it galvanized actual change in policy and approach. The list of ACT UP's accomplishments goes far beyond the Wall Street and FDA protests — ACT UP actions are directly correlated with the initiatives to create the drugs that have stopped HIV from being a death sentence, and have vastly increased the life expectancy of people living with HIV today.

Of course, ACT UP was a movement born of history, drawing tactics from earlier community organizing. Many of the successful tactics of the ACT UP movement, with their roots in "unconventional politics," can be traced to the Black Civil Rights movement.

The civil rights movement is incredibly expansive and many groups engaged in important acts of resistance with far-reaching consequences. But several organizations were at the front lines of the movement's key successes, and the NAACP was among them. The National Association for the Advancement of Colored People was formed in 1909 and is one of the oldest civil rights organizations in the country. Though the accomplishments of the NAACP are immense and varied, a key part of their organizing has been utilizing the justice system to fight for equal rights via civil suits. The average person isn't a lawyer or lawmaker, but the NAACP shows regular citizens how they can become involved in legal issues that advance equality. And, importantly, the NAACP began with years of grassroots organizing before becoming a full-blown resistance organization — a helpful reminder to those unsure about the relevance of grassroots activism today.

The NAACP is also one of the first organizations to effectively implement the ideology "think globally, act locally." The local chapters of the NAACP have been vital in both their legal and on-the-ground battles. For example, when the national office created initiatives, such as campaigns against the racist film Birth of a Nation, local chapters effectively carried out the ultimately successful boycotts.

Similarly, one of the primary actionable goals of the NAACP in the mid-twentieth century was ending legal segregation. In order to take steps towards this goal, the NAACP in Topeka, Kansas, assisted in the finding the plaintiffs for landmark court case Brown v Board of Education, as well as providing legal assistance throughout the process as the case made its way to the Supreme Court. The lawsuit was a success and segregation of schools became illegal, paving the way for national desegregation. This is just one example of how a groundbreaking legal or federal decision can be a watershed for future justice movements and change.

The Innocence Project is nationwide organization that works with specific chapters to free innocent people who have been wrongly convicted and incarcerated in the United States prison system. Along with this case-by-case goal, the organization also works towards overall reform of the justice and prison system, in a prime example of how effective organizations connect individualized work with widespread movement and reform.

The Innocence Project's goals are encapsulated in their four step process: "Exonerate. Improve. Reform. Support." By focusing on one aspect of the justice system — using DNA evidence to exonerate innocent prisoners — they are able to create larger change from the bottom up.

Each of these groups came to prominence in times of crisis, when the rights they were fighting for were under siege. These movements gained traction and eventually succeeded because they were all specific, and used research as well as targeted planning. They created revolutionary change in multiple eras — and they can inspire us to create new blueprints for protest in the age of Trump.