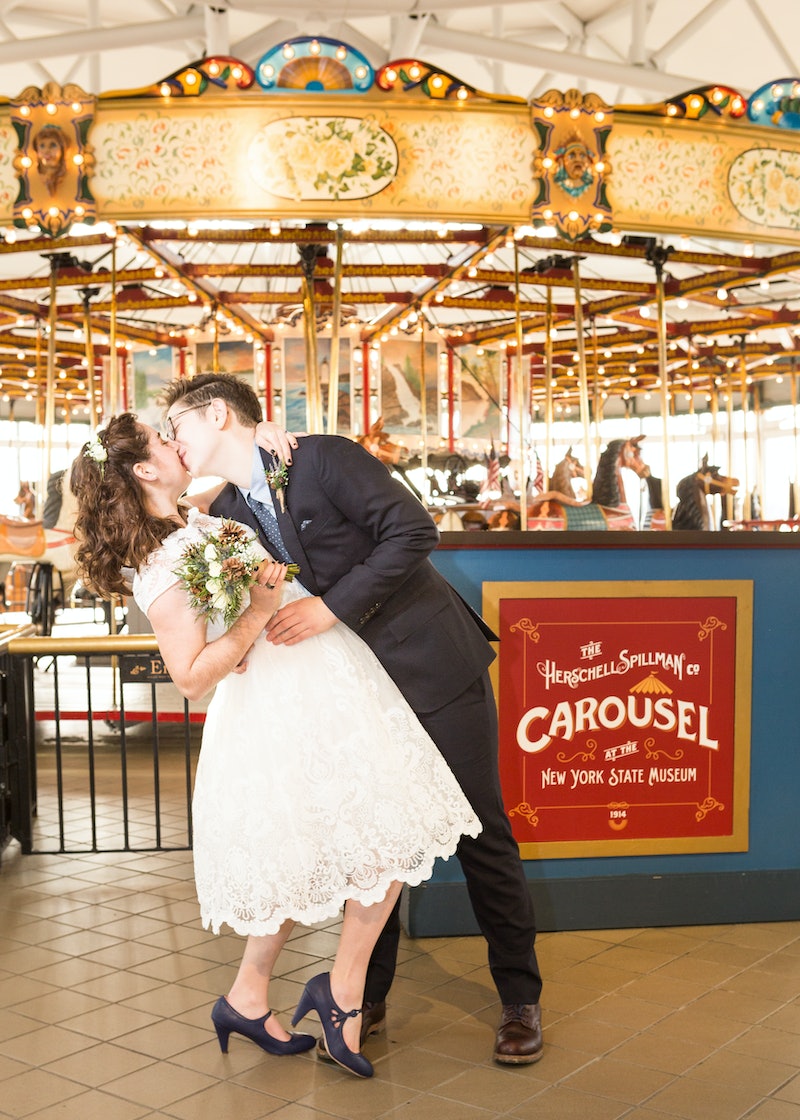 My partner and I got engaged in November 2015. All I can remember from that night is that we were outside; it was raining, pitch black, and we could hear howling coyotes in the distance. The moment itself was cold and unceremonious; we had no concrete plans to get married. I can't even tell you what day it was.

Our relationship had gotten off to a tumultuous start. Due to my typical twenty-one-year-old excitement at being in my first real relationship, as well as my discomfort of being out on my own with a challenging relationship to my family, I pushed and pulled and struggled to cultivate the generosity that is necessary in a serious adult relationship. We worked hard, but things didn't always go well.

Over a year after our engagement, plenty of fights, many self-help books on love and companionship, and a new puppy later, we were standing on the solid ground of unmarried cohabitation — and we were happy to remain there for the indefinite future. I gave up wearing my engagement ring and learned to cook a few meals. Our relationship had begun in earnest in the months after our engagement, as we tumbled into love and commitment after the swirling mass of rushed decisions and painful circumstances that began our relationship in the first place.

I started planning our wedding at about 11 p.m. on November 8. My then-fiancé was sleeping and I was simultaneously crying, watching NBC, and shopping for wedding dresses online.

The night I do remember is November 8, 2016. That’s when our engagement became real.

In the weeks before the election, my partner and I talked about what we would do if Donald Trump won. After much deliberation, we decided that, although we weren’t in the emotional or financial place we wanted to be in when we got married, we would rather be divorced in three years than never be able to get married at all. We decided that if Trump won, we'd have a small civil ceremony and gain the legal protections of marriage — assuming that he wouldn’t win and the point would ultimately be moot.

I started planning our wedding at about 11 p.m. on November 8. My then-fiancé was sleeping and I was simultaneously crying, watching NBC, and shopping for wedding dresses online.

In the wee hours, my partner came out of the bedroom wrapped in a blanket, asking why I wasn’t in bed. After some deliberation about whether they were in fact having a nightmare or not, it was decided: if we were going to live in Trump’s America, we would do it as a legally married couple.

When we told our friends, we got one of three reactions.

Most of our queer friends understood our decision. In fact, we saw several friends quickly get married in their own intimate ceremonies. Our community understood our choice because they were scared, too.

Though our straight/cis friends were supportive, they told us that the chances of our rights being taken away were slim, that it was nearly impossible for Supreme Court cases to be overturned, that we wouldn’t lose rights but might not gain new ones.

It was upsetting when people reacted this way. We would go home fuming. Privilege allowed our friends to remain comfortable and fearless. The idea that we wouldn’t be able to get married was dismissed easily by people who had never experienced discrimination based on sexuality or gender identity.

The third reaction we got was one of blind, enthusiastic congratulations. This was by far my least favorite.

Going to get our wedding rings, the sales people would ask us about our flowers or our venue. They were overly interested in whether we were going on a honeymoon and what shade of white my dress would be.

These women were sweet and, quite frankly, gave us a generous deal on our wedding rings. But they didn’t understand our marriage. Neither did the woman at the gift shop who gave me free chocolate because “it was for the bride.”

They treated us like our marriage was purely joyful and romantic. What these people didn’t understand was that our “big day” was just as much about self-preservation through legal actions as it was about love.

As a queer couple, I know that if I got into a car crash tomorrow, my partner would have to fight like hell to get past my estranged family and into my hospital room. We know that marriage is, at the heart of it, a legal commitment and not something to be taken as a given.

We planned our wedding, knowing full well that we were not ready to get married. We felt like impostors every time we went to go lay down our $25 at the jewelry counter, each time shocking the clerk at how little we were able to put towards our layaway rings each week.

I bought a wedding dress on sale. We ordered the cheapest wedding flowers the florist had ever created and found ourselves a cake topper in our budget. We informed our guests that they were welcome, but would have to buy their own dinner.

Donald Trump might have been the reason we got married, but we refuse to let him define us.

My partner’s best friend got ordained on the internet and we got married with only a handful of our closest friends, standing in the middle of our favorite restaurant, which generously allowed us to sneak in and have our ceremony before they opened for dinner.

One week later, Donald Trump was sworn in as the leader of the free world.

In the weeks since both our wedding and the inauguration, Donald Trump has reinforced for us that getting married was the right choice. He has signed executive orders restricting refugees and border control, creating hiring freezes in the federal government, as well as reducing protections for transgender students. He exerts his power aggressively and indiscriminately. We wake up every morning expecting further news that makes it easier for members of our queer community, and particularly queer youths, to be evicted from their homes, fired from their jobs, be denied goods and services, or be unable to get married.

Though my spouse and I love each other, we married practically and partially out of fear rather than an uncomplicated desire for romance and show. Queer relationships have been politicized since the Stonewall Riots in 1969. Today, in 2017, our marriage was and is a political statement, existing and thriving because we, as members of the LGBTQ+ community, want equality and protection. Our marriage defies the negative pressures of today's political environment.

The fact that we rushed into our marriage doesn't make it any less special or meaningful for us. We got our pictures done at The New York State Museum. Our photos came out beautifully, thanks to our wonderful friend and photographer. Friends traveled from across the state to share in our small ceremony.

If we were given the chance to redo our wedding, neither my spouse or I would change a thing. We look at our wedding with nothing but happy memories. They looked so handsome in their suit and I still have my wedding flowers hanging in my closet.

Donald Trump might have been the reason we got married, but we refuse to let him define us.