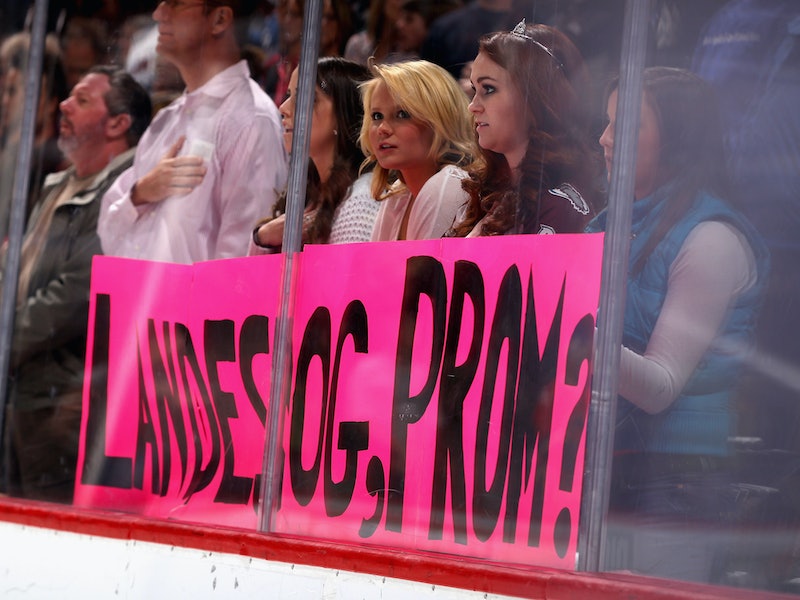 With barely 100 students per grade, my high school didn't do tradition in the typical sense. Our football games were only attended by the players' families and a handful of devoted fans; pep rallies consisted of a few half-hearted cheers and a 20-minute break from class; until I got to college, I didn't know class rings were a thing that existed outside of Sweet Valley High books. Yet despite our disinterest in sports and lack of school spirit, there was one tradition that all Blind Brook High School students took very, very seriously: prom.

In my high school, prom was the biggest event of senior year. The actual dance, a teacher-supervised dinner hosted at some nearby country club, ended at 9 p.m., but the entire event took up a good 20 hours. Between pre-pre prom, pre-prom, prom, pre-after prom, after prom, and after prom breakfast (a hangover-curing 6 a.m. meal of bagels and lox hosted by seniors' moms — yes, I'm serious), it's no wonder Blind Brook looked the other way when no prom attendees came to school the following day. All of that exhaustion, though, didn't compare to the months leading up to the day, when students attempted to ask each other to prom in the most creative, cutesy, and crazy ways possible.

In most schools, asking someone to prom consists of a well-timed question and a bouquet of flowers, but not at Blind Brook. Sure, some kids still went that route, but plenty of others put in intensive effort to come up with the funniest or most original ways to pop the prom question to their potential date. There were dances performed in hallways, balloons that filled up houses, giant PROM? chalk outlines on driveways and banners posted on cars — and that was just the simple stuff. Here are the nine craziest ways my classmates asked each other to prom:

1. Rapping Over the Loudspeaker

This couple had been dating for awhile, so it wasn't a surprise that the guy wanted to pop the prom question in a memorable way. During the morning announcements, he took over the loudspeaker to rap a song he'd written for his girlfriend, in which he listed all the things he loved about her and why he wanted to take her to the big event. The song was adorable, not to mention brave — few white, Jewish boys would have enough courage to perform a rap song for hundreds of people to hear.

These prom dates were close friends and they apparently bonded over a shared love of Family Guy. So when the guy wanted to ask the girl to prom in a creative way, he decided to integrate the series they both loved, creating an intricate diorama that showed each member of the Griffin family holding up a letter of PROM? It may not have been the most romantic prom ask, but it was certainly one of the most creative — and time-consuming — ones that year.

After a performance of the spring musical, one of the lead actors used his final bow to ask his girlfriend, also on stage, to prom. It wouldn't have been so unusual if it hadn't looked to audience members like he was proposing to her, thanks to a preface something along the lines of "I have a big question to ask my girlfriend tonight, and I'm hoping she'll say yes." I think everyone was relieved when the question turned out to be "Will you go to prom with me?," no one more so than the 16-year-old girlfriend.

Disclaimer: this story's mine, and it's adorable. When I was a junior, one of my closest friends was a senior. We both loved the movie Juno, and it'd been a joke around our group that my friend, who was on our school's track team, looked identical to Michael Cera. One afternoon, I opened my locker to find dozens of boxes of orange tic-tacs, just like in the movie. I turned around to see my friend, dressed in his track uniform and a yellow headband, coming down the stairs with flowers in hand. Cute, original, and pop culture-aware, it was the perfect way to ask someone (or at least me) to prom.

This girl was a singer/songwriter, so naturally, she chose to use music as the way of asking her friend, also a musician, to go to prom with her. The song she wrote for him, with lyrics like "'cause in the end/it's best to take a friend," became an immediate hit around our high school, with students who weren't even friends with the singer referring to "the prom song" and playing it in their cars. According to a Bustle staffer who went to the same college as the singer, the song's legacy lasted long after senior year, with students who'd never met the singer somehow knowing every lyric, and the singer herself making a music video to the song that garnered an impressive amount of views on Youtube.

6. Asking The Flight Attendants for Help

On route to the Bahamas for spring break, a guy enlisted the help of the flight attendants to ask his friend to prom. He asked them if they could put in a special announcement during take-off, and surprisingly, they complied. The girl was stunned to hear her name ring out over the intercom a few minutes later, but thankfully, she said yes — otherwise, that would've made for one awkward flight.

7. Dressing Up as a UPS Worker

This guy asked his best friend by dressing up as a UPS worker and making her "sign for a package." The package, she soon discovered, contained a bouquet of flowers, and the form she signed was actually a "prom contract" promising that she'd go with him to the big event.

Apparently, this girl had been waiting a long time for the guy she was seeing to ask her to prom, and was starting to get nervous that it'd never happen. Her worries were quelled one afternoon, though, when she reached down to pick up her puppy and discovered a small card tied to his tag reading "Prom?" The guy entered the room a few moments later.

Scavenger hunts were a relatively common way of asking people to prom in my high school, but none were as impressively done as this guy's. After finding a clue in her locker, the girl he was asking spent the better portion of an afternoon running around the school, entering classrooms and interrupting sports practices to get to the end of the hunt. Each clue was tailored to the things and places she liked, and when she finally reached the last one, it came complete with flowers, chocolate, and an in-person "Prom?" question from the guy who'd planned it all.

More like this
Starbucks’ Chocolate Cream Cold Brew Tastes Like This Retro Candy
By Emma Garza
When Did Tamagotchi Come Out? In The U.S., 25 Years Ago
By Kaitlyn Wylde
Meet The Disney Imagineer Bringing 'Guardians Of The Galaxy' To Epcot
By Charlie Mock
The Most Compatible Life Path Numbers, According To Numerologists
By Kristine Fellizar
Get Even More From Bustle — Sign Up For The Newsletter