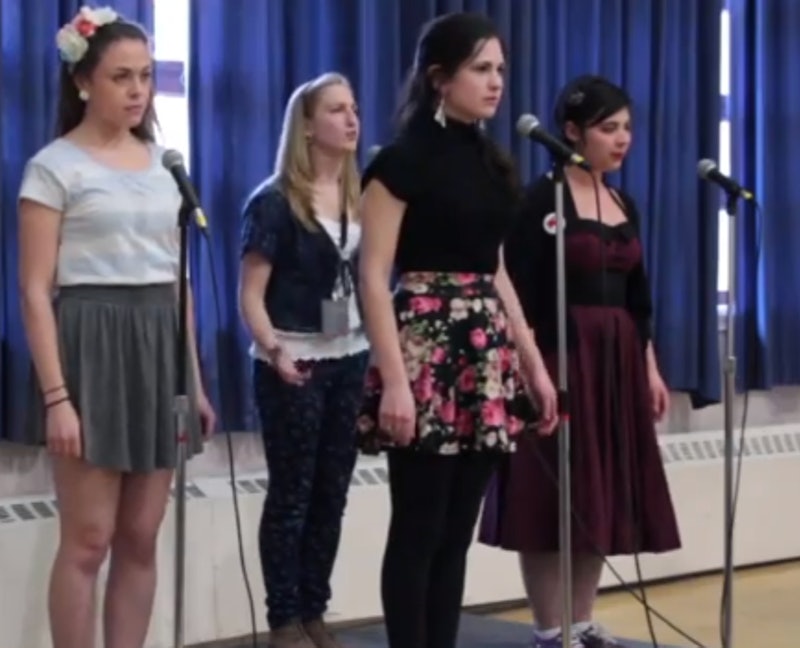 "These poems are our prayers to beat the fucking odds in this country," says the Rutgers University slam poetry team in their powerful piece, "The Rape Poem to End All Rape Poems." Performed at the College Union Poetry Slam Invitational, the poem starts as a story and then takes a sharp turn. "Yes, it's that time again," they say. "Time for another rape poem." And yes, they're aware that audiences might be tired of hearing them. The thing is, they don't care.

In just two minutes, the piece manages to weave in so many aspects of rape culture: victim blaming, slut shaming, catcalls, sympathy for rapists, objectifying advertisements, right down to the fact that people are tired of rape poems. There are so many powerful lines, and together they make one hell of a poem.

So to anyone who wants to know why there are so many damn rape poems, Justice Hehir, Lindsey Michelle Williams, Kate Thomas, and Lillie Hannon have an answer for you: "The rape poems will continue until there is no damn material left."

More like this
How To Fight For Reproductive Rights, Based On How Much Time You Have
By Courtney Young
Yomi Adegoke On The Offline Diaries & The Power Of Representation
By Jessica Morgan
The Music Industry Continues To Fail Black Women
By Precious Adesina
3 Zodiac Signs Least Affected By The May 2022 Full “Flower” Moon
By Brittany Beringer
Get Even More From Bustle — Sign Up For The Newsletter