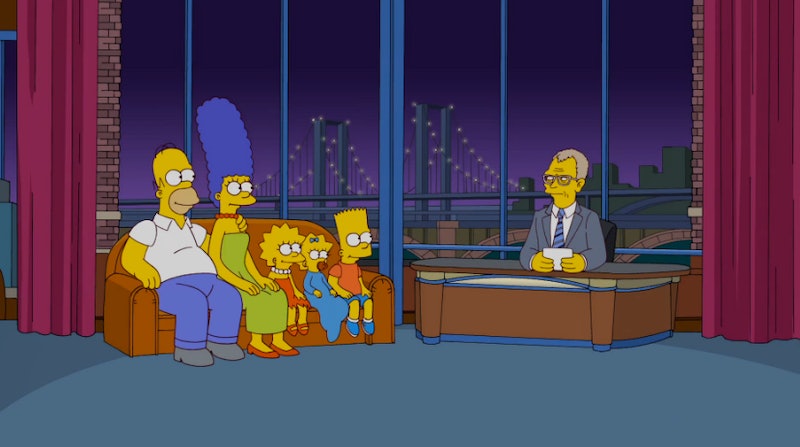 The couch gags on The Simpsons are one of the longest-running, consistent archives we have encapsulating our pop cultural history. It is fitting, then, how the show commemorated some recent news: David Letterman's now got his own The Simpsons couch gag, and, with "Rhapsody in Blue" by George Gershwin (you may recognize as the opening song from Woody Allen's Manhattan ) playing in the background as the family makes their way through New York City, it's totally touching, and so very NYC. The perfect tribute.

The gag is, as usual, integrated into The Simpsons' opening titles, with the family running to a taping of The Late Show With David Letterman, their couch set up where the usual guest chair is. And it's about as curmudgeonly as you'd expect from any Letterman send-up, too, with Lettermen commenting that flying the family in and housing them just so they could sit on a couch on his television show doesn't seem quite worth it.

Letterman, of course, announced his retirement this past week. This immediately sparked talk of who might/should/could replace him, the more persistent of the rumors pointing towards people like Chelsea Handler, Stephen Colbert, and Ellen DeGeneres as the candidates. Letterman's been a fixture on the late night circuit since the 1982 premiere of Late Night With David Letterman, making his tenure of television even longer than The Simpsons' epic run, which started in 1989.

You can watch the latter's tribute to the former below: