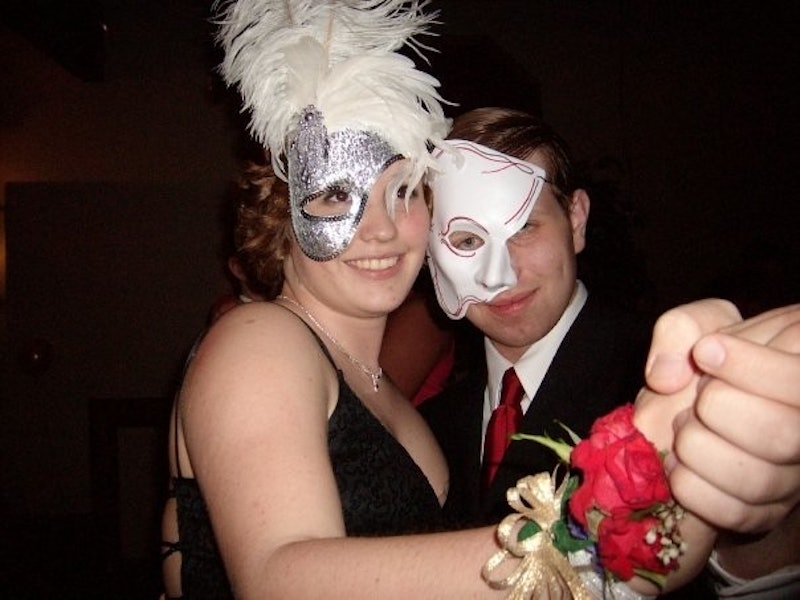 I didn't attend a huge high school. In the agriculture-focused town of Whitewater, Wisconsin, being on prom court was a thing, but it wasn't the thing. They actually don't elect a prom king and queen anymore (but only because some teachers were too sensitive about the "all students need to be equal" theory, not because of any horrendous happening). So you'd think I'd be happy to wear the crown of second-to-last prom queen in Whitewater High School's history. Pause while I try not to laugh in your face.

Prom season has arrived — and I'm happy to say the only reason I know this is because of the Facebook mess of dress photos (Brooklyn isn't much for high school girls dressed in tulle) — and with it, a flood of not-so-good feelings come back to me like a punch in the face.

I wasn't a popular girl growing up, in today's terms anyway. I tried to be nice to everyone, with a few fails here and there that ended with some dramatic girls crying in the cafeteria. The real reason I probably won was due to the fact that I spent a lot of time hanging out in the basement of a local church, playing computer games at the aptly titled "Computer Club" with a slew of extremely awkward and unbelievably nice boys. There were a lot of them and you can bet your panties they didn't vote for any of the blonde-haired beauties who paid them a second of attention when they needed homework help. But bring prom queen wasn't the dream it's made out to be. In fact, it was more like a nightmare.

So, ladies, if you're on this year's prom court, were named prom queen, or weren't and wish you had been, let me share a few pieces of wisdom gleaned from my own horrific Carrie-esque prom queendom (which was not nearly as messy, but just as emotional).

1. Don't: Introduce Yourself As a Prom Queen

You know in college when you have to partake in those ice-breaker activities? No matter how pretty your themed crown or whatever was (mine was a mask since our theme was "Midnight Masquerade"), don't share your prom queen history. I did and by senior year I was still known by some as that "girl who couldn't let go of high school."

2. Do: Expect People to Diss Your Mom. Really.

The wonderful woman pictured with me above spent hours helping plan the event with the rest of the involved parents, and took off a day of work to decorate. Once I was crowned, the assumptions were unleashed quicker than a rousing game of Army Ball (sorry, Computer Club joke). "Her mom must have rigged it." "Wasn't her mom prom queen? Must be nice to be a legacy child." "She couldn't do it herself, so she had her mom help." First off, any family who takes pride in a prom queen legacy is too much to handle. Second, my mom wouldn't be caught dead as a prom queen. In fact, it's an inside joke within the family now — to this day, my dad still tells me to share my royal lineage on my resume.

3. Do: Expect Ridiculous Rumors and Insults

Aside from the suggestion that my mom had rigged the election, I was subjected to nasty comments about my weight and even nastier rumors, ones that involved me sleeping with teachers and whatnot for the coveted title. I was 16, and even if I was a bit precocious and well-versed in related matters at an early(ish) age, please — I wasn't into older men until I was at least 21. The rumors were not short-lived — I dealt with them until the very end of my high school career, when a few non-believers booed through my graduation speech. Classy, naysayers.

4. Don't: Get Upset When You Lose a Best Friend or Two — They'll Come Back

I nearly lost two of my best friends to prom queendom. While there were many other factors that played into the overall falling out, it was the event that sent everything tumbling down. Thanks to a number of rumors and misconceptions revolving around prom night, I spent my senior year hating them for the fact that they hated me (It might have made sense at the time, but probably not). It wasn't until five years later, on my 21st birthday, that I heard from one of them (and the second one a year later), confronting the issue and extending an olive branch via one long Facebook message. Receiving those messages was one of the more comforting and relief-inducing moments I can remember, and to this day, we've fallen back into a camaraderie that feels like it did pre-prom, even if we all live in different states.

5. Do: Laugh About It Years Later

Despite how seriously people take it, being prom queen is ridiculously silly. What do you think this is, Mean Girls? Reveal your formerly royal status over a ladies lunch years down the road, indulging your friends with the details of all of the bitchy things you endured and participated in back in the day. Not only will it make them appreciate you more as you are now, but it'll bring about plenty of laughs — especially if you have semi-serious photos of you playing Garage Band with your prom crew. I promise it's therapeutic.

I can laugh about all of this now, but at the time the experience was completely world-ending. To this day, I cringe thinking about some of the things I said ("You're just jealous because no one likes you!" — real nice, teenage self) and did to defend myself. A week didn't go by without me making other girls cry in the cafeteria while fighting against some stupid prom-related accusation. This went on for the entirety of my senior year. Long story short: Don't be that girl.

As for prom "do's?" Do spend more time with your lady friends than with your date (who you probably won't remember exists in a few years). Do let your mom help out with the planning committee — In fact, ask her to. Even if you think it's nerdy then, you'll learn to appreciate the little things she does when you're living thousands of miles away in an overpriced studio in NYC. And, if you're one of those jealous girls who's prettier, more popular, and better suited for the crown (in your personal opinion), get over yourself. Because you're the only one who thinks so.

More like this
What The History Of Pride Month Means For Celebrations Today
By Jay Polish
25 Quotes About Love To Share During Pride Month 2022
By Madeleine Aggeler and Emma Garza
Meet The Spice Company Founder Who Sees Chai As A Metaphor
By Madhuri Sathish-Van Atta
The Viral TikTok “30,000” Sound Fits Nearly Every Scenario
By Courtney Young
Get Even More From Bustle — Sign Up For The Newsletter