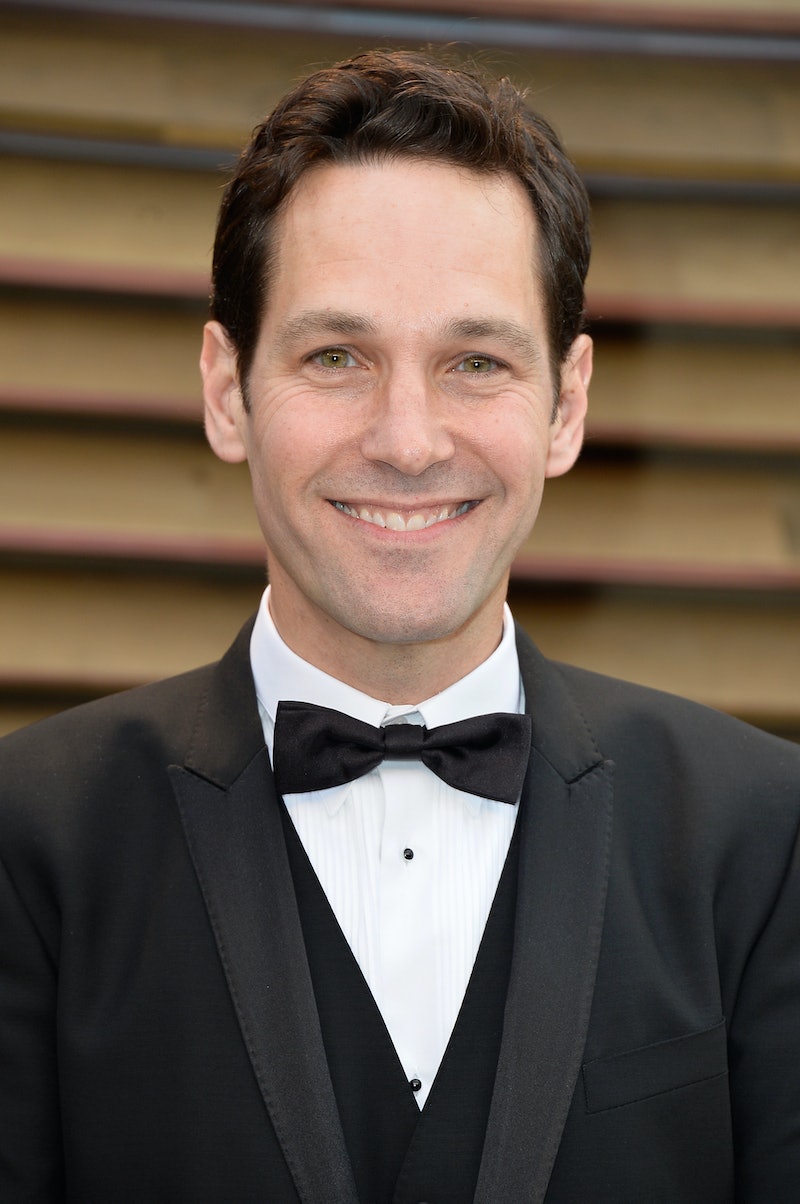 Hey everyone, Paul Rudd turned 45-years-old over the weekend. Hold on, I don't think you're quite grasping the enormity of this. Paul Rudd — actor, eternal crush, and the fine wine of people — is now 45-years-old. Is he aging backwards? Is this some sort of Benjamin Button situation in which he's somehow always in the middle? Rudd's age sorcery has become the source for nearly- impossible online quizzes, as well as the scorn of Jon Stewart, but there's simply no explaining how the This is 40 star has the same youthful glint and smile that he had nearly twenty years ago in Clueless and Romeo + Juliet. (You'll hear no complaining about it on our end, either.)

While we may never find the same fountain of youth that Rudd undoubtedly drank from, he hasn't kept the magic all for himself. In fact, over the years, he's managed to keep us all young. In nine simple ways, the Anchorman funny man has showed us all how to stay as vibrant as he has. If anyone has proved that age is just a number, it's Paul Rudd and in honor of his recent birthday, here's all the ageless wisdom he's imparted on us.

Paul Rudd is a very, very silly man. I mean this as a compliment, of course. Silliness is an often undervalued trait in a person, especially after the age of 8, but clearly Rudd is on to something. Rudd can make silly faces, do goofy voices, land a punchline, and act all-around silly (both off-screen and on) and he's great at it because he goes for it. Rudd isn't embarrassed by his silliness. In fact, he embraces it. Sure, his characters in movies like Our Idiot Brother, Forgetting Sarah Marshall, and Wet Hot American Summer are pretty childlike, but hey, it's hard to look old when you embrace the silly.

If you've ever watched a Paul Rudd on a talk show, then you've seen his seriously sweet dance moves. But he's, thankfully, he's also showed them off in movies like The 40-Year-Old Virgin and TV shows like Tim and Eric's Awesome Show, Great Job!. But Paul Rudd doesn't apply to the school of thought that you should "Dance Like No One is Watching." No, it seems his mantra is "Dance Like Everyone is Watching, and Make It As Hilarious as Humanly Possible," and that's something we should all live by.

Love is All You Need

Rudd and his wife Julie Yaeger have been married for over ten years (they were together for years before they wed) and have two children Jack and Darby. But it's not just that he and his wife have a successful Hollywood marriage, but that it's a marriage kept out of the eye of Hollywood. As Rudd put it in a 2011 Elle interview, "I don't think I'm going to sell a lot of tabloids."

Forget the Bad, Remember the Good

Even Paul Rudd has had a few blips on his career we're sure he'd like to forget about. Lucky for him, we have. When you star in movies as great as The Perks of Being a Wallflower and Knocked Up, and you marry Phoebe Buffay on Friends, it's easy to forgive for misfires like Dinner For Schmucks and How Do You Know. Hey, if Paul Rudd can get past Over Her Dead Body, you can get past just about anything.

Paul Rudd may just have the coolest set of friends in Hollywood (like Jason Segel, Amy Poehler, Adam Scott, and Jennifer Aniston to name just a few) but these aren't one-and-done friendships. In fact, Rudd has not only worked with a lot of his close friends throughout his career, but he's stayed friends with guys he's known since high school. Paul Rudd and Jon Hamm are not only childhood friends, but childhood friends that have remained good friends since both of their respective careers have taken off. So, there you have it: surround with equally attractive, talented, and hilarious people like yourself.

Get Out of Your Comfort Zone Sometimes

Paul Rudd can play lovable and sweet like the best of them (prime example being I Love You, Man) but even the lovable and sweet actor can play a jerk. And really well, at that! We might prefer the sensitive, adorable Rudd, but you have to admit he's awfully hilarious in more biting turns like Role Models and 200 Cigarettes. It's also fascinating to watch when Rudd effortlessly transitions from more mainstream fare like the Anchorman movies to indies like Prince Avalanche.

Like when you visit Conan O'Brien and show him the same Mac & Me clip every single time instead of showing a clip from your own movie.

More like this
Kim Kardashian & Tristan Thompson Had An "Inspiring" Thanksgiving Celebration
By Brad Witter
Paris Hilton’s Tweet About The 2006 “Holy Trinity” Photo Will Make You Feel Old
By Marina Watts
The First Trailer For 'That '90s Show' Includes So Many Nods To The Original Series
By Jack Irvin, Alyssa Lapid and Grace Wehniainen
Lindsay Lohan Just Recalled A Hilarious 'Parent Trap' Story
By Sam Ramsden
Get Even More From Bustle — Sign Up For The Newsletter