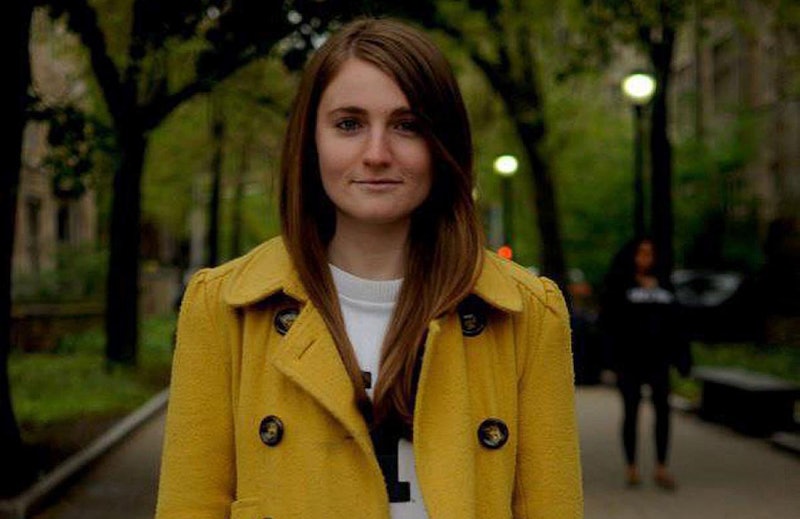 Tomorrow is the official release date for The Opposite of Loneliness by Marina Keegan, a collection of fiction and essays that has been somberly referred to as Keegan's "first, and last book," because in 2012, shortly after graduating from Yale, the 22-year-old author was killed in a car crash.

Needless to say, the collection has been getting a lot of press. And why not? It's a well-written book with a tragic backstory. Anyone who sets out to review The Opposite of Loneliness can't help mentioning how Keegan's life "brimmed with promise"; she'd interned at the Paris Review and had a job lined up at the New Yorker and it seems inevitable that, had she lived, she would have continued to experience literary success. But this is what happened instead: after the car crash, her mother extracted the hard drive from Keegan's broken computer, Keegan's writing professor at Yale edited the documents found there, and the result is something that we can buy tomorrow, her first, and last, book.

This story is many things: lovely, sad, confusing. But above all, it's strange. Surely, Keegan would be ecstatic to have a book coming out. But is this the material she would have chosen? Does she like the picture on the cover? Would she want it this way?

Posthumous publishing is an eerie beast, and there's a chance we're all a little too cool with it. Let's be honest with ourselves: a cult of personality springs up around a book when the author is no longer around. And nothing makes for better press. And that feels creepy. On the other hand, without posthumous publishing, the world would be robbed of a number of very important books. Why should we have to lose the author and the work?

Over at the New Republic, Alice Gregory is also conscious of the innate bizarreness of reading and writing about Keegan's first, and last, book. Gregory writes, "The act of reviewing — or even just having critical thoughts about — juvenilia produced by someone who cannot defend herself seems both loathsome and pointless." Though Gregory goes on to rave about Keegan's "promise," like everyone else, the sentiment remains: we feel strange talking about posthumous publications. It seems naïve to gloss over the author's death, but what are we supposed to do? Begin every sentence with the phrase, "no longer with us"?

When David Foster Wallace committed suicide, the literary world doubled over on itself. I was in a fiction-writing class on "epiphanies" when I heard the news. My young, male professor told us what had happened, more shaken-up than any of the undergraduates. Wallace's death was — is — a loss that the culture will feel for a long time to come, like the losses of Alexander McQueen and Kurt Cobain. The litany of dead artists goes on and on. The loss of massive potential has a particularly bitter taste. We are loathe to let the artist go.

We're also very curious. What were they working on when…it happened? And how can I get my hands on it?

Wallace was working on a novel called The Pale King at the time of his death, and I remember the first time I saw a copy of the book. I was shocked. It was 500+ pages long. It was hardcover. It was very expensive. Despite its ghost-white cover, despite its morbid aura, the gigantic novel was nothing if not tangible. But it wasn't a book, not really. Let us make no mistake about The Pale King: it is not a novel by David Foster Wallace. It is a compilation of manuscripts and computer files, written by David Foster Wallace, pieced together by an editor, and published after Wallace's death.

Did he want it this way?

For a conscientious writer, publishing isn't necessarily the Holy Grail of a career. Better to remain unpublished than to publish something bad. Back at the New Republic, Gregory muses on her own early "work," saying, "The stories and essays I wrote in college were terrible, and the idea of them being published makes me physically ill." It is a universally acknowledged fact that writers are sensitive about their work and would really prefer if you didn't read it until it is finished, please. No serious living writer would cobble together notes and incomplete paragraphs and call it a book and be happy about it.

And yet in the presumptive world of posthumous publishing, all bets are off. We can try to guess what the author would want, but there's no author around to tell us that we're wrong. Franz Kafka famously wanted all his manuscripts burned after his death, but his friend Max Brod ignored him and published the stories anyway. Sure, we're all really happy we have more Kafka to read — but that doesn't change the fact that Kafka did not want it that way. Vladmir Nabokov, who controlled his own image so aggressively that he scripted out his entire Paris Review interview, didn't want his final, unfinished novel published — but his son ignored him and published it anyway, resulting in a book that many believe was a mistake. F. Scott Fitzgerald was working on The Love of the Last Tycoon when he died, and his editor pieced together the fragments, resulting in a powerful story — but one that literally peters off into half-finished ideas on the page. Would Fitzgerald have wanted it this way? Would anyone?

Marina Keegan was obviously passionate about writing. She was on track to becoming a writer, and her parents — those who may have known her best — made the decision to publish her brief life's work in this compelling and carefully edited book. It's a beautiful gesture of love. And maybe Keegan did want it that way.

But we can never explicitly know. And at a certain point we have to stop wondering what the author meant, because that's futile. So the question gets turned over to the readers. We have to ask ourselves if we value our own curiosity over the author's intent. Do we want it this way? Is it better to read a work that's imperfect — or not read it at all?