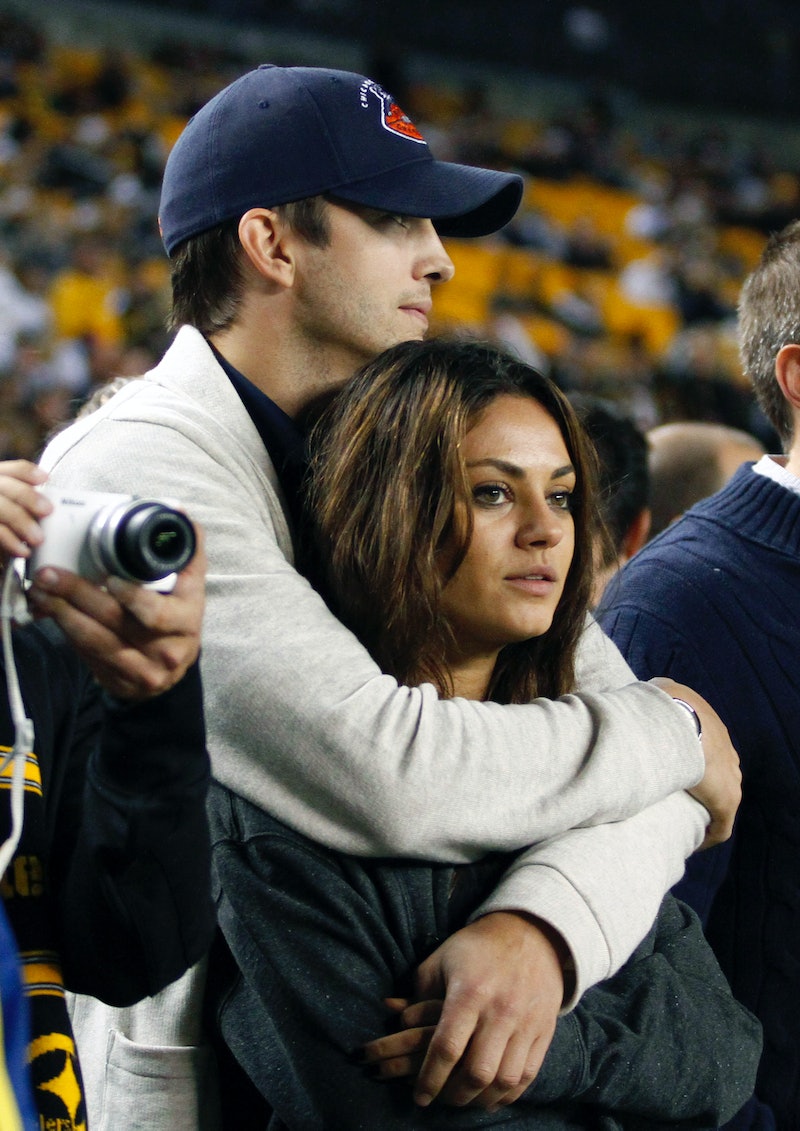 It's been a long time since Mila Kunis and Ashton Kutcher were on screen together. The two played the ill-fated couple of Jackie Burkhart and Michael Kelso on That '70s Show back when Mila Kunis wasn't even legal yet and now they've come full circle into an engagement and a pregnancy. If Jackie Burkhart could see herself now, she'd probably squeal in joy and drag Donna off to watch her try on wedding dresses.

Kunis and Kutcher took such a long time going public with their relationship that it seems only fitting that they've embraced the media the way the media has embraced them. In their first onscreen appearance since That '70s Show, Kunis and Kutcher poke fun at their relationship and their engagement via their characters on Two and a Half Men. Kunis plays a world traveler named Vivian who meets and connects with Kutcher's character, Walden, in an episode of Two and a Half Men set to air on April 10.

In a preview clip, Vivian and Walden talk celebrities and their relationships, making clear allusions to their real-life relationship as they do. Kunis bets that Kutcher only dates hot actresses, a claim that Kutcher denies because they're "all crazy". Then Kunis shrugs off the big deal about celebrities because, after all, "who cares who's dating whom or who's engaged to who or who has a sex tape that no one will ever, ever see?"

She follows this line up by narrowing her eyes just slightly in Kutcher's direction and, if that's an allusion to anything, then I am both curious and horrified. Despite being named the Sexiest Woman Alive by Esquire in 2012 and FHM's Sexiest Woman in the World in 2013, Kunis has had a career blissfully free of nude picture scandals or sex tape leaks. Even when her phone was hacked, it wasn't pictures of her that hit the internet.

Kunis is probably not alluding to anything, though. The sex tape comment was mentioned in the same conversation as Kim Kardashian, after all, despite Vivian professing not to know who Kimye is. And if it is an allusion, well, here's hoping for her sake that we really do never, ever see it.

Watch the clip below.