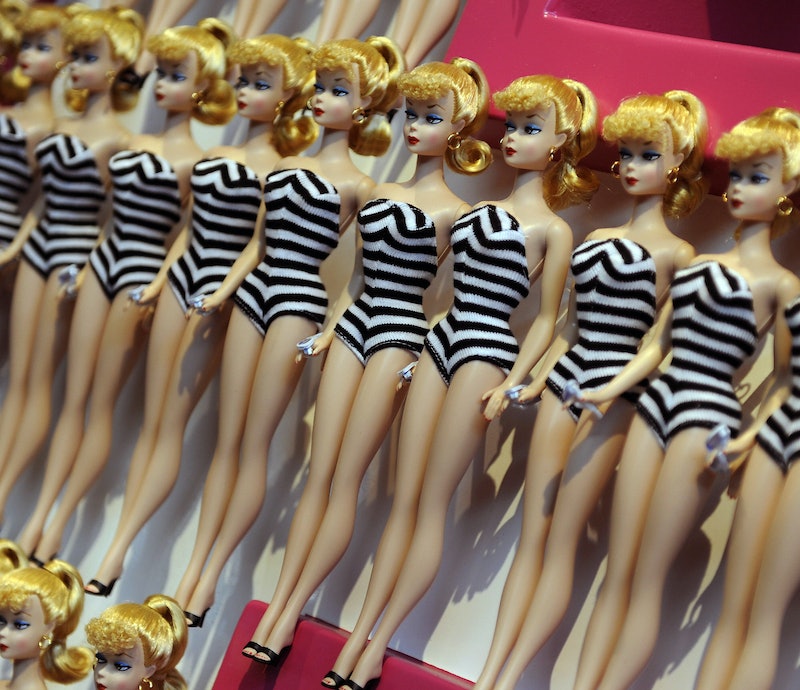 If you thought Valeria Lukyanova (aka the human Barbie) was scary before, you're about to be more disturbed. GQ interviewed Lukyanova about topics ranging from family life to feminism, and her responses were certainly...interesting.

Valeria has been popping up on the Internet for a couple years now, mostly due to her shocking appearance. With massive eyes, an impossibly small waist, bleach blonde hair and plastic-looking skin, the "model" has quickly become known for her Barbie-esque appearance. But, make no mistakes about it, Valeria prefers to be called "Amatue," not Barbie. Obviously.

Lukyanova claims the name came to her in a dream. Trust us, this is only the first of many things about Valeria that seem a little off. While her eyes are plenty big on their own, GQ describes how she uses makeup to create an extra wide-eyed, doll-like look. She's even done a YouTube tutorial explaining her technique, in case you're interested in looking like Barbie anytime soon. There's the all-liquid diet (explains a lot about her figure), and then, of course, her own opinions on her now famous looks. When the GQ interviewer describes her beauty as Western or American, she disagreed:

"I wouldn't say so. Everyone wants a slim figure. Everyone gets breasts done. Everyone fixes up their face if it's not ideal, you know? Everyone strives for the golden mean. It's global now."

The interviewer replied by mentioning that the ideal of beauty used to be much different than it is now. Valeria's (Barbie's? Amatue's? I don't know.) reply? "That's because of race-mixing."

And that's right about when things started to get weird.

Lukyanova expanded on that thought (ugh):

"For example, a Russian marries an Armenian," Valeria explained. "They have a kid, a cute girl, but she has her dad's nose. She goes and files it down a little, and it's all good. Ethnicities are mixing now, so there's degeneration, and it didn't used to be like that. Remember how many beautiful women there were in the 1950s and 1960s, without any surgery? And now, thanks to degeneration, we have this," she said.

The interview continues, and Lukyanova talks about her upbringing in Moldova, a relatively poor country in Europe. Her transformation into the woman she is today or, rather, the character that she plays, began a long time ago, it seems. First she was goth, then an amateur model, and then came the super wealthy boyfriend phase. And voila. Somewhere in there, plastic surgery (although she claims she has only had a breast enhancement) and doll eye makeup combined to create whoever or whatever Valeria is today.

If you were worried about Lukyanova passing her views on beauty, femininity, or miscegenation down to future generations, don't. She says she doesn't plan on having children anytime soon. Or ever. She told GQ that the idea of having children "brings out a deep revulsion" in her.

"I'd rather die from torture," Valeria said. "The worst thing in the world is to have a family lifestyle."

Tell us how you really feel, Valeria.

Other highlights of the interview include how she is "against feminism" and also apparently working on a New Age opera.

We can say that a basically racist, malnourished (can anyone be totally nourished on an all-liquid diet?), and anti-feminist "model" shouldn't be getting so much attention, but how do you look away from this? If media exposure is what Valera Lukyanova wants, she's got it.

More like this
Help! I'm Not Getting Any Attention On Dating Apps. What Can I Do?
By Sophia Benoit
13 Memorable Beauty Moments From Paris Fashion Week S/S 2023
By Olivia Rose Ferreiro
Doja Cat Took On Paris Fashion Week In Head-To-Toe Gold Body Paint
By Audrey Noble
Hailey Bieber’s Moody Black Mani & Vampy Lips Are Peak Fall Vibes
By Audrey Noble
Get Even More From Bustle — Sign Up For The Newsletter