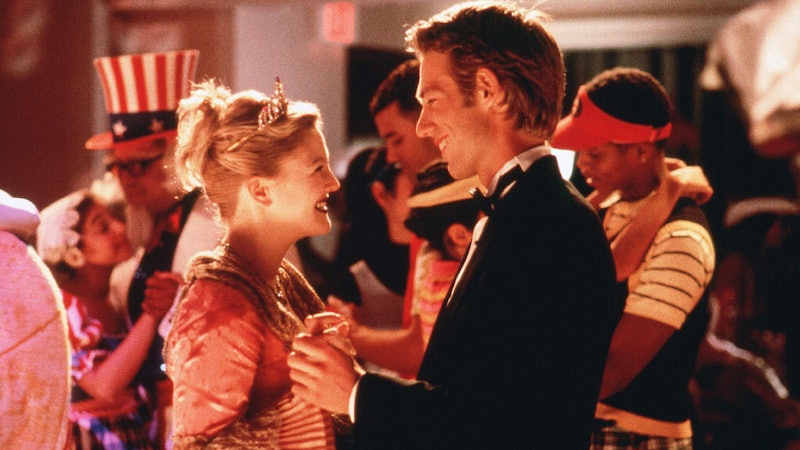 It's hard to believe it's been 15 years since Never Been Kissed debuted to audiences. Then again, looking back at the film's fashion — Josie's feather-boa cardigan, her ridiculous soccer mom haircut, and those prom outfits — it's hard to believe it hasn't been longer since those styles were in vogue. Nevertheless, the film still ranks high on our list of ultimate 90s chick flicks, for it's unbelievable yet delicious premise (a journalist goes undercover at a high school and gets to relive her nerdy years and be popular again), it's bevy of 90s stars — James Franco, Molly Shannon, Michael Vartan — and it's happily ever after. The Beach Boys' "Don't Worry Baby" would never sound the same. So, to celebrate our favorite 90s offering getting better with age, here's 11 things you might not have known about the film.

2. Lee Lee Sobieski, who played the nerdy best friend of Josie Geller when she returns to high school, was offered the role of popular mean girl Kristin, but opted to play Aldys instead because she found the character more interesting.

3. That familiar sounding song the band plays when Josie finds her car in the middle of the football field? That would be the theme song to The Simpsons, an animated show that rose to popularity in the 90s.

4. Never Been Kissed is basically Fast Time at Ridgemont High , a screenplay that was based on Cameron Crowe's real life experience returning to high school at the age of 21.

6. Gary Marshall's character says to his employees, "I don't even know my own kids." Ironically, his real life daughter Kathleen was sitting directly to his right when he uttered the line.

7. Jeremy Jordan, aka "Guy", is also a singer, and had a super awesome and cheesy hit, "The Right Kind of Love." Earrings, spiked blonde hair, gratuitous ab shots, and baggy pants may or may not be involved. (And if you're craving more after watching this — which you will be — I suggest "Wanna Girl")

8. The film was the first picture to be launched under Drew Barrymore's own production company, Flower Films. (The company also released Donnie Darko, Charlie's Angels — to name a few).

9. Octavia Spencer, would be Oscar-winner, plays one of Josie's co-workers in the film.

10. A plot point in the film centers around Josie, posing as a high school student, being years older than her teenage crush, Guy. But in real life, the actor playing Guy, Jeremy Jordan, is two years older than Barrymore.

11. When the film came out in 1999, Roger Ebert called the infamous baseball countdown clock ending, "contrived and artificial," but, he noted: " But you know what? Because the wait involved Barrymore, I actually cared. Yes, I did."