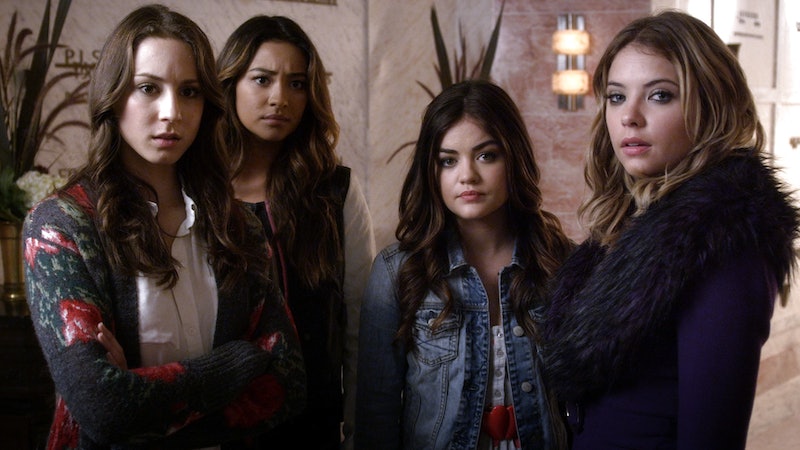 I'm kind of obsessed with Pretty Little Liars. Okay, okay — saying that I'm "kind of" obsessed is like saying there's "kind of" a lot of water in the ocean. Truth be told, I'm a full-blown Pretty Little Liars fanatic. When it comes to my favorite ABC Family show, I'm as obsessed as Spencer when she makes a major break in the A case. There's nothing that I love more than spending my Tuesday nights with the prettiest little liars around, and the fact that we had to wait an entire two months for the show to return for Season 5 on June 10 makes me incredibly sad. Like, Toby-when-he-discovers-his-box-of-his-dead-mom's-stuff sad. (Dear God, I cannot be the only one who gets these references.)

If you're a Pretty Little Liars fan, you already know the stakes of the Season 5 premiere. After finally reuniting with Alison, the little liars confronted their maybe-tormentor on an NYC rooftop. Little did they know that Ezra — Aria's on-again, off-again beau — was following the liars, and that his knowledge about A's supposed identity would put him in a life-or-death situation. Ezra declares to the girls — and to the masked person with a gun — that he knows who is behind the hoodie... and gets shot before he can tell the girls who it is. And that's not the only major cliffhanger we were left with going into the premiere — Alison may have made it out of her shallow grave, but it looks like her own mother has climbed into one of her own. So, umm, yikes.

I wish I could say that I barely spent any of the time that Pretty Little Liars was on hiatus thinking about the show, but anyone who reads my obsessive fan theories on this site would know that's just a lie. What can I say, I'm totally head over heels for this show. Think you're as obsessed as I am? Find out — here are the 17 signs that you're a true Pretty Little Liars superfan.

You don't even attempt to answer your friends' texts between 8 and 9PM on Tuesday nights.

Sorry, but you're hanging with your four other friends tonight. In Rosewood, Pennsylvania. Nothing personal.

The theme song gives you chills every time you hear it, probably because you know ALL OF THE DRAMA is about to happen.

And it still bothers you that Aria's "shh" is off center.

You can spot a shady character a mile away... even when the little liars can't.

You didn't buy that Nate was really Maya's cousin for a second, and, honestly, you're surprised that Emily did. Isn't everyone on Pretty Little Liars some degree of shady?!

You look forward to the Halloween episode more than any real-life Halloween party.

(Even though the baby doll mask still haunts your dreams... )

You shipped Haleb so hard that you felt like you were going through a breakup when Caleb left for Ravenswood.

When the big Ezra reveal happened, you felt betrayed... or validated, because you always knew something about him was off.

Either way, you had ALL OF THE FEELINGS.

You've come up with a theory as to who A is, and have been trying to convince all of your friends to get on board.

Indeed it is, Spencer.

You knew Ali was alive the entire time.

You know what the "twin theory" is, and are constantly back and forth on whether it still holds water.

You've always been suspicious of Wren, and not just because he dared to drive a wedge between Toby and Spencer.

Baggage like being A?! I have my eye on you, Wren.

So much sass. Love her.

You've memorized more than a few of Hanna's tidbits of wisdom.

You found the recasting of Jason jarring...

...until you realized how crazy hot New Jason is.

You find that you no longer can trust small town cops to have your best interest.

Detective Wilden may be a fictional character, but he's scummy enough to make you think twice about your "friendly neighborhood officer."

The show's cliffhangers give you the worst case of television anxiety...

...But when the show goes on hiatus, this is your mood for months on end.