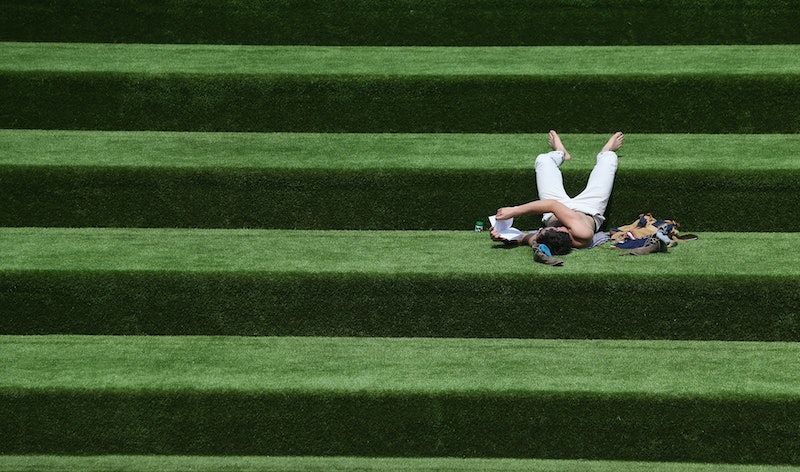 As lofty as it sounds to devote an entire summer to reading Infinite Jest or War and Peace (in the original Russian), some of us should probably come to terms with the fact that we’re not that kind of reader. We consume our news in digestible sound bites and like our stories Twitter-sized. But we don’t necessarily want to subsist on a diet of dime store novels. We need something with bite, the literary equivalent to the artisanal peanut butter and jelly sandwich. (Yes, it’s real.)

The novella may just be literature’s answer to gourmet fast food (it's making a comeback, after all). But on lists of must-read short books, women often get left out — and what list could be complete without The Awakening or Frankenstein? These slim volumes also give us the opportunity to explore minor works by major authors, so digging in with 'em is a win-win. Here, you'll find nine tiny classics you can start and finish in a single day.

The idea for Frankenstein came to Mary Shelley in a dream. After jumping into a friendly ghost story competition, she conjured up Dr. Frankenstein, a mad scientist who reanimates a corpse. Frankenstein was groundbreaking, a disquieting monster tale with a heart and a conscience.

Although not George Eliot's most famous work, nor the best example of the psychological realism she’s known for, The Lifted Veil is nevertheless a lively stab at horror writing, a genre the Victorians devoured. And at 75 pages, it’s a briefer introduction to Eliot than Middlemarch.

Kate Chopin is one of the early voices in a Southern literary tradition that includes William Faulkner and Flannery O’Connor. In The Awakening, Edna Pontellier struggles with her role as a wife and mother in late 19th century New Orleans.

Edith Wharton is best known for dissecting the moral failings of America’s upper class, but Ethan Frome proves that quiet country folk harbor disastrous repressed desires, too. Under a blanket of snow, our poor titular character lusts after his wife’s cousin, Mattie. He can’t sled out of that town fast enough.

Out of the Harlem Renaissance comes this tale of two pale-skinned black women, Irene Redfield and Clare Kendry. Irene is married to a successful doctor and active in the Negro Welfare League. She is shocked to discover her old friend married a white man and has been keeping her racial background secret. Larsen explores the psychological and social consequences of “passing” in 1920s New York.

Pale Horse, Pale Rider is praised for its harrowing description of the flu epidemic of 1918. For a story that takes place almost a hundred years ago, it’s remarkable for featuring a single, sexually liberated woman who has a promising career as a journalist.

A snowy day, a creaky old mansion, a killer on the loose: It almost sounds like a game of Clue. Three Blind Mice started as a half-hour radio play. Christie rewrote it as a short novel and later adapted it into a theater production. The Mousetrap is the longest running play in history.

One old edition of this book has a blurb on the cover: "THE CLASSIC BESTSELLER ABOUT AMORAL YOUTH ON THE FRENCH RIVIERA!" Some may dismiss this book as teenage melodrama. After all, the author was only 18 when the book was published. The characters can seem larger than life (cooler than life, maybe), but they're still very human.

The Prime of Miss Jean Brodie by Muriel Spark (1961)

Miss Jean Brodie is a woman in the prime of her life, devoted to teaching a select group of students she deems worthy of her attentions. Eventually, one of them betrays her. Set in 1930s Edinburgh, Brodie is a shining example of Spark’s trademark wit. Maggie Smith won an Academy Award for her spirited portrayal of the unconventional teacher in the 1968 film adaptation.

More like this
10 Must-Read New Books Out This Week
By K.W. Colyard
The Most Anticipated Books Of August 2022
By K.W. Colyard
The Biggest Differences Between 'Bullet Train' & The Book It’s Based On
By Arya Roshanian
We’ve All Had Bad Sex. Nona Willis Aronowitz Is Talking About It.
By Sophia Benoit
Get Even More From Bustle — Sign Up For The Newsletter