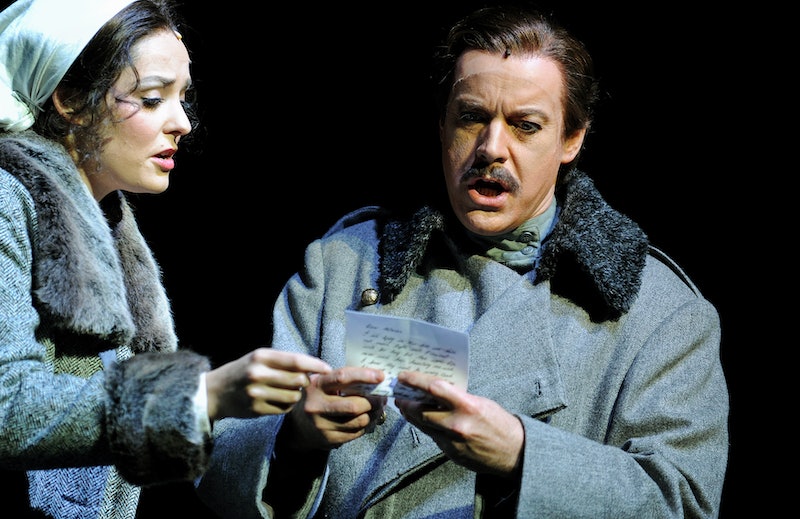 Think literature has no real world applications? Think again. According to a bundle of newly declassified CIA documents, the book Dr. Zhivago, by Boris Pasternak, was used as a secret weapon to undermine Soviet ideology during the Cold War.

Yeah, what? Apparently literature wasn't always just a way for celebrities to get just a little bit richer. Peter Finn, an editor at the Washington Post, teamed up with writer/translator Petra Couvée on the book The Zhivago Affair: The Kremlin, the CIA, and the Battle Over a Forbidden Book, and the Washington Post fills us in on just how this ideological battle went down. Spoiler alert: no drones involved.

Boris Pasternak knew he'd never be able to get his novel published in the Soviet Union, because it was just too humanistic, too implicitly anti-socialism. Thankfully, he found a publisher in Milan who agreed to produce the novel, and when the CIA caught wind of the book, they knew they'd stumbled upon a weapon. Both the message of Dr. Zhivago and the fact that the Soviet Union wouldn't publish a book by "the man acknowledged to be the greatest living Russian writer" were revolutionary; the former would make Soviet citizens question their government's ideologies, while the latter would make them "wonder what is wrong with their government" for banning such a book, according to declassified CIA memos.

What's so scandalous about a tortuously confusing Russian novel, you ask? Let's let our friends at the CIA take it away, literary analysis-style:

Pasternak's 700-page novel … is considered to be the most heretical literary work by a Soviet author since Stalin's death. Pasternak's humanistic message — that every person is entitled to a private life and deserves respect as a human being, irrespective of the extent of his political loyalty or contribution to the state — poses a fundamental challenge to the Soviet ethic of sacrifice of the individual to the Communist system. There is no call to revolt against the regime in the novel, but the heresy which "Dr. Zhivago" preaches — political passivity — is fundamental. Pasternak suggests that the small, unimportant people who remain passive to the regime's demands for active participation and emotional involvement in official campaigns are superior to the political "activists" favored by the system. Further, he dares hint that society might function better without these fanatics.

Glossing the fact that that is a better literary analysis than I've ever written, the CIA makes some good points. The most effective propaganda is the subtlest; as they point out, Pasternak never demands that Soviet citizens openly revolt, he just suggests that perhaps there are better ways of doing things. And not much is more dangerous than the power of suggestion.

The CIA knew that they needed to get the novel into the hands of Soviet Citizens, so they got a Dutch publisher to print blue linen-bound copies Dr. Zhivago, translated into Russian. The plan was to distribute these copies at the 1958 World Fair, called the Brussels Universal and International Exposition. Since it would look a little suspicious if the USA tent began happily handing out copies of a banned Russian novel, the CIA snagged a crew of Russian emigre Catholics, who pressed the book into the hands of Soviet citizens from the dark confines of the Vatican's tent. Sketchy! Soon enough, the blue linen book covers were scattered all over the fairgrounds, as Soviet citizens tried to hide the fact that they were now carrying something illegal.

But the CIA wanted to expose even more Soviet citizens to the novel, and so they accomplished this, as any good intelligence organization knows to do, by making the books really, really small. They printed a pocket-sized paperback edition — sorry, a "French publisher" printed a pocket-sized paperback edition — and had it distributed aggressively at the 1959 World Festival of Youth and Students for Peace and Friendship (think: Russian emigres tossing copies through bus windows).

Read the CIA's declassified documents here for a crash course on literary analysis and Cold War subterfuge, and if you're itching to read the novel itself now, you can snag an English translation on IndieBound — perhaps saying a little prayer of gratitude for freedom of the press while your PayPal transaction loads.