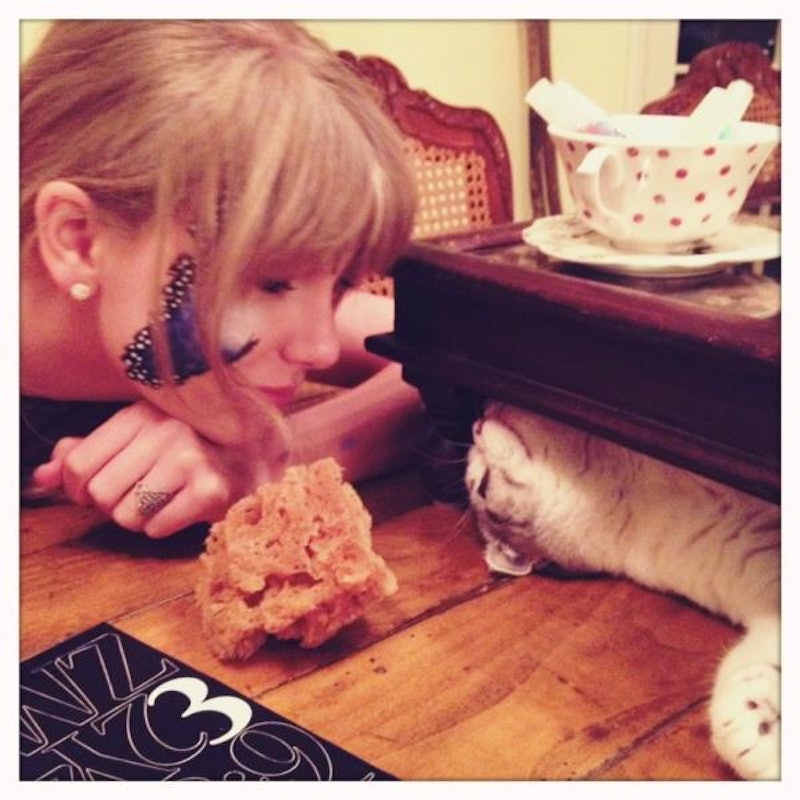 I was a 3-year-old in Disney World, and I still felt a void in my life that needed to be filled. So, when my mother took me to the bathroom, trying to ease me into potty training in the land where dreams come true, I struck a deal: I would go to the bathroom... if I got a cat. And what do you know? My dream really did come true. As soon as we returned home from vacation, I was gifted my first cat. And it most definitely wasn't my last.

Because I'm an out and proud cat lady, who — if I were not forced to pack my life into a one-bedroom apartment — would aim to catch 'em all like Pokémon so I could constantly be accompanied by a lovable fur ball. It sounds crazy to those unlike me, sure, but I'm certainly not alone. Taylor Swift (above), your weird aunt, then entire Internet — we'd lap up any opportunity to pet a cat on our laps.

We get each other, even if we don't get our cats all the time. (Why does she love the cable guy more than meeeee?!) So let's commiserate, fellow cat lovers. Because I can't be the only one who understands...

Cuddling at night is the best.

But cat hair in your nose is the worst.

Your double bed is not big enough for your cat. Try again.

You know LOLspeak better than Spanish, which you took for six years in school.

You'd rather hear a human cry then a cat cry.

This is your reaction when you discover you're dating a dog person.

This is your reaction to someone who says they'll never be a cat person.

You are not allowed to wear clothes until your cat tries them out as a pillow.

You are not allowed to work.

And you are not allowed to travel.

And you are definitely not allowed to wear black.

This is how you imagine your cat waits for you when you're gone.

This is how your cat really waits for you.

This is how you hope your cat greets you when you come home.

This is how your cat really greets you.

This describes your ideal night.

There is nothing more adorable than a cat paw.

You will stop at nothing to get a toy that entertains your cat.

And you still have yet to find a toy that entertains your cat more than nothing.

But this is heaven.

Your cat will always decide who wins board games.

You have this terrible thought daily: Toy mouse or dead mouse?!

You know that cat leashes are great in theory.

But a failure in practice.

You give your cat presents for the holidays.

Still, your cat prefers what the presents come in.

Which is why you let your cat open everything during holidays.

You must always create space for your cat to run back and forth for no reason.

You must always check for lumps before you sit.

You love your cat more than most friends, family, and possessions.

Probably because you dress your cat in this.

There is no piece of furniture in your house that your cat hasn't "improved"...

...but that's okay because how can you stay mad at this?

You've panicked when you've closed the lazy boy chair before checking to make sure you weren't accidentally decapitating your cat, who's been sitting underneath.

Your cat will make sure you hate bath time more than she does.

Your cat will not accept disorganization.

You know your cat is an asshole.

And you find that adorable.

You've tried and failed to make your cat go viral.

And as soon as the cameras go off, your cat will do something incredible.

You've tested whether those whiskers really do indicate how wide of a hole your cat can fit through.

The one fool-proof way to shut your cat up? Treats.

Until your cat eats them all and wants more treats.

But, really, your cat will settle for eating anything.

Dr. Tinycat can heal any and all of your ills.

But all the frustrations, snubs, and assholery is worth it for that one time a day your cat shows you true love and companionship.