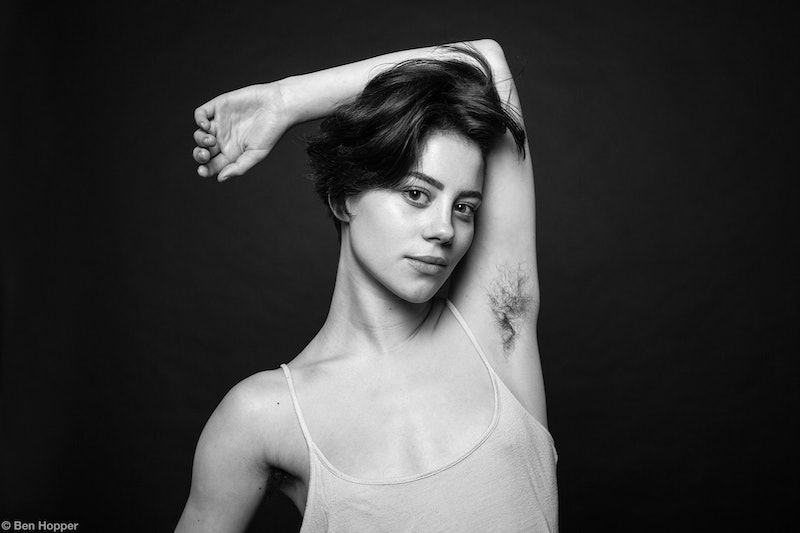 Oh man. This? This is perfect. Kindly turn your attention photographer Ben Hopper's "Natural Beauty" photo series, which features a whole bunch of beautiful women — along with their underarm hair, in all its fluffy glory. Take that, "dudeness!"

With "Natural Beauty," the London-based photographer and artist aims to delve deep into the ongoing conversation about “fashionable” beauty standards. “As I matured as a person and an artist, I realized I liked [armpit hair]. I think it can be a beautiful look,” he recently told the Huffington Post. This idea became the photo series' jumping-off point. By pairing conventionally beautiful women with the unconventional look of unshaved armpits, the series makes a powerful point about the relation between beauty and body hair: Namely, that the one isn't dependent on the other (or perhaps more accurately, the lack of the other).

Although Hopper began working on “Natural Beauty” in 2007, it was only recently that he figured out the format that would best serve the series; in February, he posted a photo of Swedish actress Emilie Bostdt on his Facebook page that quickly went viral. After that particular image’s success, he determined that black and white photography with a strong, dark background was the way to go. It’s true Hopper’s subjects tend to be models, actresses, and other types of professional pretty people, but not all of them are, and in fact he’s currently looking for more women of all varieties to photograph (his contact info can be found here if you’re interested in posing). Furthermore, I’d even argue that the fact that so many of his subjects are professionally pretty underlines his point even more.

It’s tempting to draw parallels between Hopper’s pro-body hair portraits and Veet’s anti-body hair ads; both depict certain visions of beauty, and they’re both making a pretty strong point while they’re at it. But what Hopper gets right that the “Don’t Risk Dudeness” idea got so horribly wrong is this: He’s not trying to make any statements about what women should or shouldn’t do with their body hair. “I don’t want to say that I want women to start growing their armpit hair,” he told HuffPo. “I just think that it’s a possibility and people shouldn’t dismiss it. I’d like people to just question [beauty standards], the whole thing.”

A handful of “Natural Beauty” images can be seen on Hopper’s Facebook page; additionally, he just debuted a number of previously unseen photographs in the Huffington Post. Check ‘em out over there or on his website — it’s well worth your time.

More like this
Why TikTok Is Flooded With Controversial Videos About "Pick Me Girls"
By Courtney Young
This TikTok Song About An Unrequited Romance Has FYPs In Shambles
By Emma Carey
Here's How To Get Your iPhone To Update Automatically Forever
By Emma Carey
On TikTok, Tinned Fish Date Night Is The Latest Viral Food Obsession
By Emma Carey
Get Even More From Bustle — Sign Up For The Newsletter