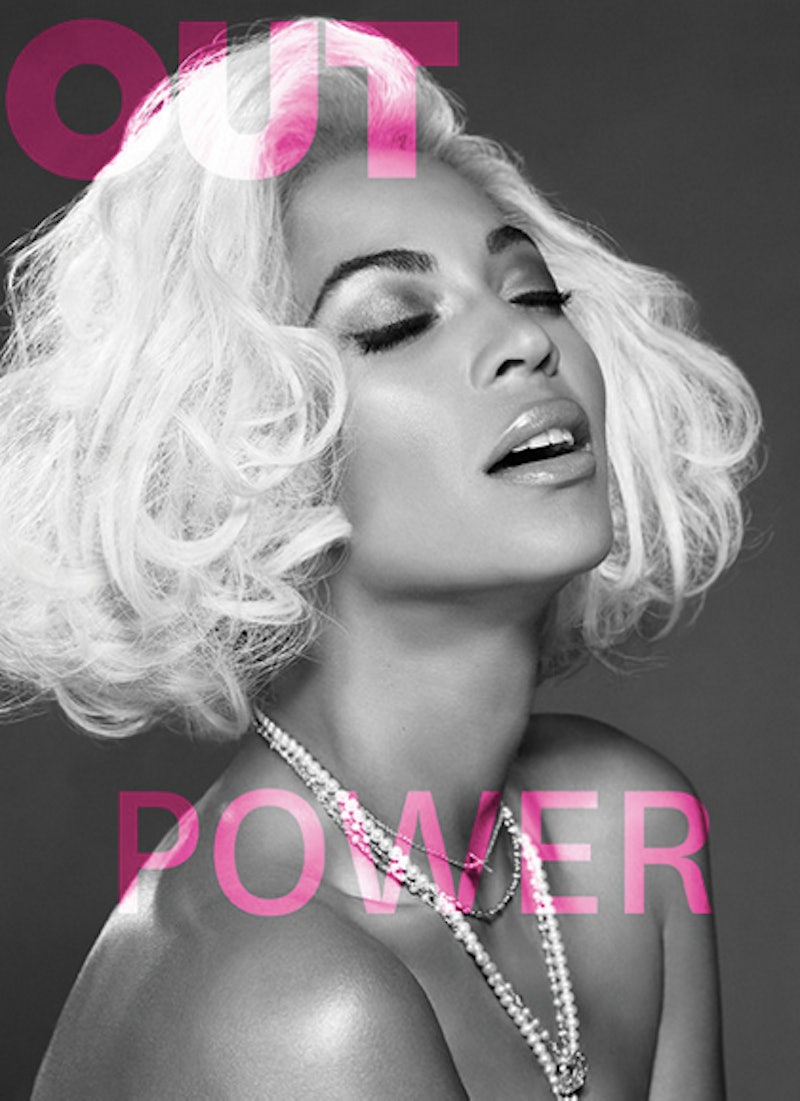 It’s no mystery that Beyoncé (Queen Bey, if you prefer) is an outspoken and proud feminist. Her brand of feminism — one that embraces equality of the sexes, domesticity, and female sexuality — has been debated ad nauseam. And in May’s issue of OUT Magazine, in an article called “Beyoncé Liberated,” she has plenty more to say on the subject. But did she choose the right outlet to express herself? Is that choice even important?

Let's start with her comments on feminism:

There is unbelievable power in ownership, and women should own their sexuality. There is a double standard when it comes to sexuality that still persists. Men are free and women are not. That is crazy. The old lessons of submissiveness and fragility made us victims. Women are so much more than that. You can be a businesswoman, a mother, an artist, and a feminist—whatever you want to be—and still be a sexual being. It’s not mutually exclusive.

The reason her fans and feminists (some, not all) alike are overjoyed when she speaks openly about the status of women in the world is because she is indeed one of THE most powerful women on our fair planet. When she speaks, people listen. And though it's wonderful she's using her voice to talk about such an important issue, it’s high time she brings her eye-opening and conversation-spurring ideas to wider markets.

This interview seems a little bit like she's preaching to the choir.

Publications such as OUT are easier spaces to discuss the topics of feminism and equality, and her statements, especially those on LGBT rights, though supportive and true, are a bit too after-school-special-feeling:

But what I’m really referring to, and hoping for, is human rights and equality, not just that between a woman and a man. So I’m very happy if my words can ever inspire or empower someone who considers themselves an oppressed minority…We are all the same and we all want the same things: the right to be happy, to be just who we want to be and to love who we want to love.

And sure, Bey can preach to the choir all she wants and the choir will sing it back loud and proud but for change on a greater scale, it’d be great to see her speak up in less comfortable scenarios. And though she does inspire and empower, she’s capable of much, much more. We've all heard "***Flawless," we know there's more bite to her politics than some are led to believe.

But no, it's not completely up to Beyoncé to change the entire world’s opinion. Just like it’s not Angelina Jolie’s responsibility to end worldwide poverty. We can nitpick their decisions about when, where and how to speak their mind on important issues all we want, but at the end of the day, it's a gift knowing that such incredible women are in these corners.

We're all fighting the same fight, after all, and the more Beyoncé makes art that celebrates female sexuality, the more she asserts herself in the seat of power and control and uses her mega-celebrity to speak out about equality in spaces beyond her fandom, the better off we'll all be.