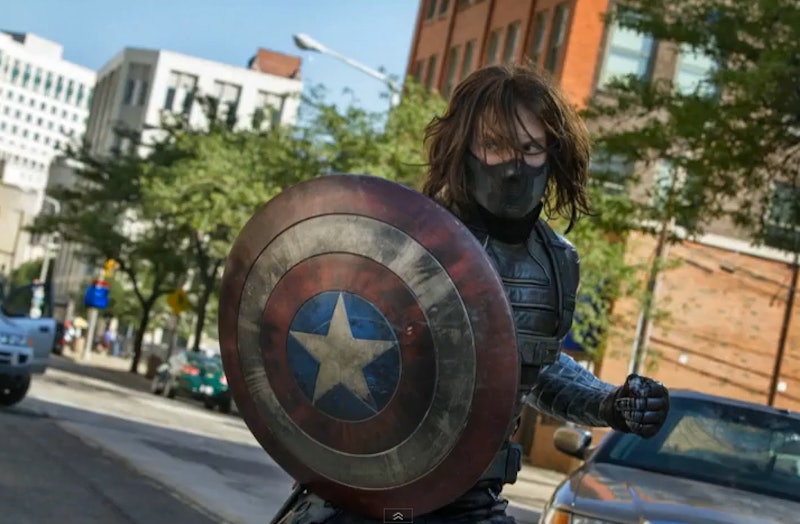 Captain America: The Winter Soldier changed up a lot of things for the Marvel universe. For one (spoiler alert) it completely decimated S.H.I.E.L.D. as the agency holding all our heroes together. It also planted a hell of a lot of shout-outs, foreshadows, and just plain teases. Which is why we're grateful to the people who put together this video of Winter Soldier 's many easter eggs.

The list — brought to us by Mr. Sunday Movies — includes everything from the super obvious name-drops (of course they'd mention Tony Stark, it's practically Marvel law), to the tiny little arrow necklace Scarlett Johansson's Natasha Romanoff/Black Widow was wearing around her neck in the film, further pointing to a possible romantic somethin'-somethin' with Jeremy Renner's Clint Barton/Hawkeye.

There are also some easter eggs that may have an impact on Marvel's future: Fury's name-drop of Dr. Stephen Strange, for example, a character who Marvel has long hinted at a filmic future for, and who has served as a consultant to teams like the Avengers in the comics. Perhaps most cryptic of all, though? Brock Rumlow (that guy who's not the Winter Soldier who keeps trying to kill Cap throughout the film) ends the film all kindsa scarred, hinting that he has a Marvel future in Captain America 3 — as Crossbones, the villain in the comics who (SPOILER ALERT) ends up killing Steve Rogers, with Cap passing the torch of the Captain America title to Bucky Barnes (aka the former Winter Soldier). This storyline from The Death Of Captain America fits really rather well with the seeming inevitability that Captain America 3 will be Chris Evans' last in the role of Steve Rogers, and with pretty much everything (Sharon Carter, Crossbones, Bucky, etc.) set up in the final act of Winter Soldier. So, yeah. Prepare yourselves for that.

Also, don't worry: There are a ton more easter eggs I didn't even mention here, so the video's still well worth watching.

Meanwhile, I'm still trying to figure out who that high school valedictorian in Iowa City who Fury also name-dropped is gonna turn out to be.