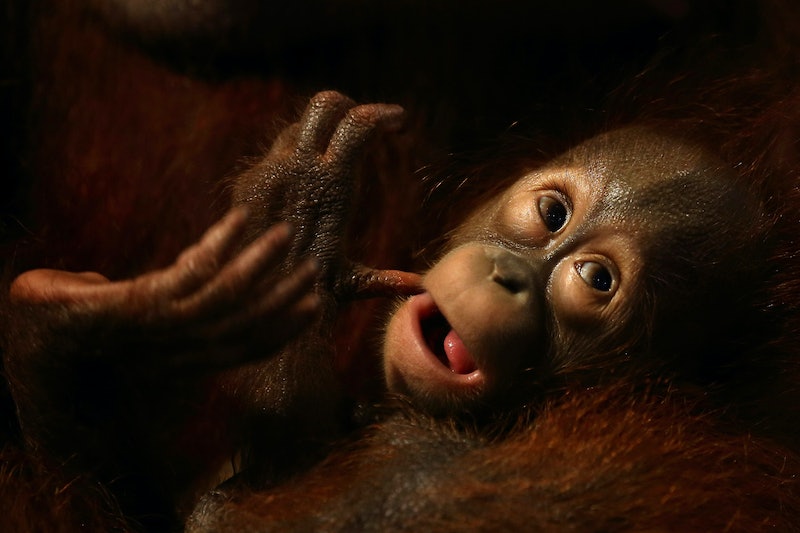 There are so many horrible things happening in the world that it’s easy to feel helpless and incapable of affecting social change . But sometimes small actions can make a big difference. We’ve written a series of guides to help you know where to start — today. Today’s guide: Five easy things you can do to help fight animal cruelty.

You can make a point to not buy products from companies that test on animals, and doing so isn’t as difficult as it might seem. You just have to know who to avoid.

As for alternatives, Tom’s of Maine is reliably cruelty-free. So are Fábula, Aurelia, and Dr. Bronner’s. For more, check out PETA’s list of cruelty-free companies.

GO VEGGIE, At Least ONE DAY A WEEK

By one extensive and almost obsessively thorough estimate, the average carnivore in the U.S. could save 406 animal lives every year by becoming a vegetarian. Obviously, that’s a huge step for most of us, because bacon. But even cutting down on your animal consumption by a little bit can have a serious impact.

For example, if 1,000 people decided to go vegetarian just one day a week, around 58,000 animal lives would be saved. That may not seem very significant in the grand scheme of things — but it’s certainly significant to those 58,000 animals.

If you don’t want to give up meat at all, you could simply restrict your diet to humanely-prepared meat. The brand Ayrshire Farms is a good option: not only is their beef humanely-prepared, but so are their eggs, chicken, pork, and dairy products. Other companies to check out include Milagro Ranch (beef), Native Gardens Food (chicken), and Lathem Farms (eggs).

For more, check out the list over at Certified Humane, an organization dedicated promoting humane treatment of farm animals from birth to slaughter — and if you want to be extra thorough, cross check it with Animal Welfare Approved, another anti-cruelty group.

If you want to go beyond consumer activism, you might consider donating to the Humane Farming Association. The folks there conduct in-depth investigations of meat industry practices, produce educational material on the subject for children, and lobby for ethical farm conditions at the legislative level.

Puppy mills are an especially insidious form of animal cruelty, as they thrive on generally good intentions of well-meaning pet owners. While there are federal standards for the housing and care of commercially-raised animals, they’re not very well enforced, and due to a loophole in the Animal Welfare Act, they only apply to breeders who sell to pet stores or brokers, exempting those who sell directly to consumers. As a result, tons of puppies are raised in truly horrific conditions.

The Puppy Uniform Protection and Safety (PUPS) Act would change this. It would expand the definition of a “high-volume retail breeder” to encompass those who sell directly to the public, mandate adequate living space for dogs in breeding facilities, and require that dogs being raised for commercial purposes be given regular opportunities to exercise.

The law has been introduced twice in Congress but never passed, so you should tell your local representative, who you can find here, to support it until it becomes law.

SIGN THIS PETITION TO SHUT DOWN THE SURABAYA ZOO

In general, you should probably avoid zoos altogether if animal cruelty is a concern to you. Animals in zoos are separated from their natural environments and families, subject to constant harassment and disturbances (children banging on windows, etc), and forced to live in a confined space for the rest of their lives. Zoo life is so intolerable that some zoo animals have actually been given Prozac to help manage their moods.

But conditions at the Surabaya Zoo in Indonesia are cruel on a whole new level. Over 100 animals have died at the zoo in less than a year, including a lion who strangled after getting his neck snared on the cable used to open his door. The pelican cage is so overcrowded that some of them have started destroying their own eggs. When the last giraffe in the zoo died, examiners found 40 pounds of plastic in its stomach.

A petition at Change.org demands that Indonesian lawmakers take action to shut down the zoo. It has over 184,000 signatories. You should be one of them.