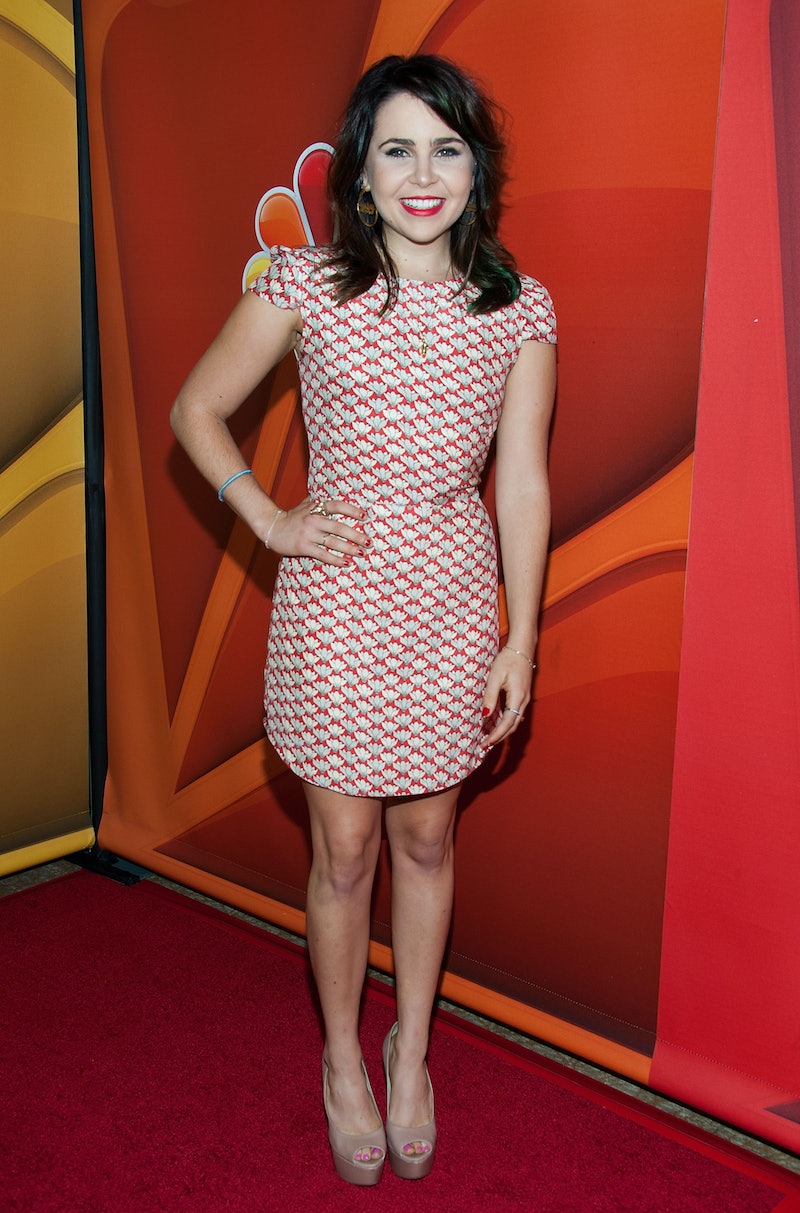 You may remember Mae Whitman from Arrested Development — that is, you may remember her character Ann's misrememberings (Plant? Egg? Her?) — or you may know her now as the oft-rebellious teen Amber on Parenthood. And, if the recently announced negotiations pan out, you'll soon know Mae Whitman as "The DUFF" — or, "Designated Ugly Fat Friend" — the lead role in an upcoming high school comedy film of the same name. The script, which was adapted from a Young Adult novel by Kody Keplinger, will apparently tell the story of "Bianca, a 17-year-old girl who deals with the ignominy of being labeled the 'designated ugly fat friend' of her social group by leading her fellow DUFFs in a scheme to overthrow the school’s evil queen, Madison," according to Deadline. On the one hand, I'm all about Whitman, so anything she's cast in draws my automatic interest. On the other hand, though, I get exceedingly nervous every time Hollywood proposes films about overweight characters, as they so often fumble spectacularly — and The DUFF is already presenting a few red flags.

First of all, I can't help but notice that McG is slated to produce. For reference, his earlier credits include Terminator: Salvation, Nikita, and the new Charlie's Angels movies, among many others. Sure, he's a capable and eminently experienced guy, but to me, his name means flashy car chases and fight sequences; let's just say I'm not necessarily going to look to him for nuanced young women's emotional dramedy.

Which brings me to my next point: The novel (which, full disclosure, I have not read) is, according to a bevy of reviews on GoodReads, about a young woman who is labeled her friend group's "DUFF" by a promiscuous young man at her high school and subsequently enters a complex and potentially self-destructive sexual relationship with him, only to learn some serious life lessons in the process. From what I can tell, a gang of DUFFs overthrowing a bitchy queen bee is all the film's invention — which worries me, lest a tale of frank and sometimes messy self-actualization turn into a Caper Film, fraught with pop-music montages and food-themed pranks. Mean Girls already gave us Kalteen bars, thanks very much.

Mainly, though, I'm worried because, plainly put, overweight people often get piss poor treatment on the silver screen. It's all you can do to get a bigger character to go 10 minutes without bringing up their hi-larious heft; when a whole plot is structured around size, things threaten to get insensitive but quick. Though the climate has certainly gotten a bit better in recent years, with women like Rebel Wilson, Gabourey Sidibe, and Melissa McCarthy inching their way toward the forefront of Hollywood, the fact remains that, even when larger characters are allowed more than a pratfall into a vat of melted cheese, they still often deliver lines that could be muted and dubbed over with "But, fat! Did we mention, fat? Food! Fat people eat food, right? Also, they are fat!" Believe me, I love McCarthy's character in Bridesmaids more than I love most actual humans, but the fact remains that she she ended up in a sex scene with a giant multi-meat sandwich and was given the one-liner "Physically, I don't bloat," the joke being, har har, she's so bloated already.

Plus, as a side note, I find myself thinking how Whitman feels in all this: As Ann on Arrested Development, she was repeatedly joked about for being unattractive (e.g., Michael accidentally calling her "Annabell" because she's "bell-shaped"). Now up for a role with derogatory adjectives right in the name, you've got to wonder how she, an ostensibly lovely-looking young woman, handles that kind of casting. And on the flip-side, you've also got to wonder why Hollywood would balk at casting, say, Sidibe as Bianca. As a Mae Whitman fan, I'm all kinds of stoked for her to take a leading role, but with so few larger women allowed a sympathetic top billing, especially in high school comedies, why not do a Nikki Blonsky-style search for the next zaftig leading lady? What I'm really trying to say is, isn't it time for Martha Dumptruck to get her comeuppance?

Still, honestly, the absolute last thing I want to do is start an argument about who is and isn't "fat," who is and isn't "ugly," because to do so is to engage in the same mean girl game as the friends who would invent such a nickname — failing to remember that "beauty" is endlessly subjective, its norms all but arbitrary, and that ultimately, to play into this kind of casting quibble, even with good intent, is to further enforce those often harmful norms. Though every female friend group may not have a Designated Ugly Fat Friend, I'd bet that each has at least one (if not more) who at one point considered herself as such, regardless of her outward appearance. Here's hoping, then, that whatever this film turns out to be, it ultimately manages to muddle through that nuance, to force each of us to recognize the "DUFF" lurking within ourselves, and other such boundary-breaking kumbaya-itudes. C'mon, McG — you can do this.

Meanwhile, as we all pray and cross our fingers (in the brief moments when they're not full of Ho-ho's, amirite, gals?), I strongly suggest that everyone remotely interested in an accurate representation of life as an overweight female teen turn to the BBC's My Mad Fat Diary, which just finished its second six-episode season. It is as hilarious as it is poignant, about its character's size without being about it, heart-warming and -breaking in turns — thanks in large part to its inimitable star Sharon Rooney. In short, I could not possibly recommend it more highly.

And, if The DUFF really does turn out to fulfill its caper-y worst case scenario, we can all at least retreat back to early Arrested Development to revel in the days of the ever-unshakable Plant. I mean — her?