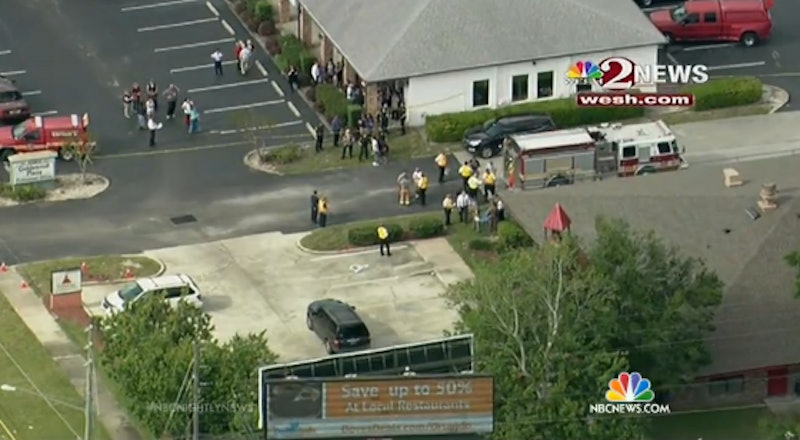 It's a parent's worst nightmare: One girl is dead after a car was plowed into a Florida day care, injuring 13 others. The driver, whom authorities believe is an ex-convict named Robert Alex Corchado, then sped away from KinderCare Learning Center in Winter Park, Fla. Arnold Palmer Hospital for Children in Orlando reports that it is treating one patient in critical condition, and five others remain in serious condition.

Officials have not released the name or age of the girl yet.

About 50 children were inside the day care at the time of the hit-and-run. A silver Dodge Durango crashed into a parked car, which was then pushed into the day care at around 3 p.m., witnesses say. Officials found the SUV in the driveway of a Winter Park around 5 p.m., but the driver was not inside. Neighbors said they did not recognize the vehicle. Corchado was reportedly seen at Orlando International Airport and rented a car.

"We do know he is trying to flee the area ... We got information he might be trying to catch a flight out of Orlando," said Cindy Williams, a spokeswoman for the Florida Highway Patrol. She added that some of the day care injuries were "very, very serious." One child was pinned by the car when it crashed into the building.

Corchado has a past criminal record: He's served jail time for cocaine trafficking and has an open case that includes hit-and-run driving, heroin possession, and cocaine possession charges. The 28-year-old was released from jail in September 2012, according to the Orlando Sentinel.

"Our thoughts are with all of our families and staff, and we are pulling for those who have been injured to quickly recover from this tragic accident," Colleen Moran, a spokeswoman for KinderCare, said in a statement.