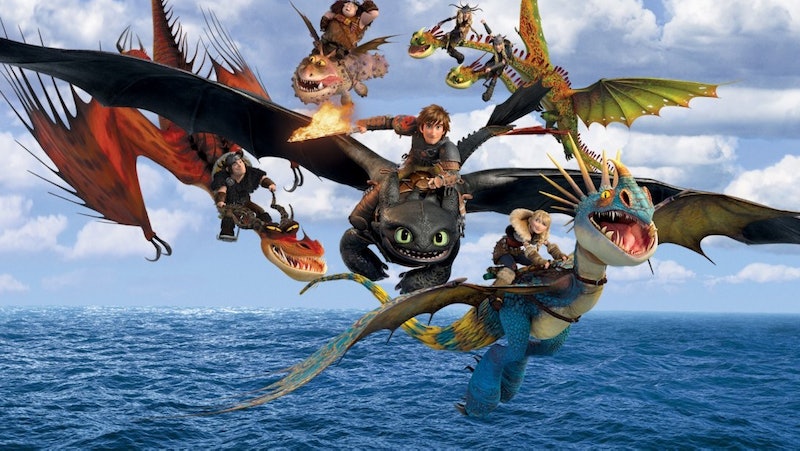 We've waited four years for the return of Hiccup Horrendous and Toothless and for good reason. Earlier this year DreamWorks unveiled a teaser and full-length trailer for the How To Train Your Dragon sequel and they were brilliant — all the way down to the film's big twist. On Thursday fans were treated to a new full-length trailer for How To Train Your Dragon 2 that piled on the action, the thrills, and revealed even more about Cate Blanchett's mysterious new character. So now we REALLY can't wait for June 13 to get here.

First, is it just me or does it seem like DreamWorks went out of its way to just drop MAJOR spoilers in both the old and new trailers for this film? Not that we're complaining — because we're still totally going to see this movie in IMAX 3D. But anyway, the new trailer for How To Train Your Dragon 2 is absolutely thrilling — visually, emotionally, and in the sheer scope of dragons created. It's also thrilling in the sense that I'm thrilled that we only have two more months to wait before the film hits theaters.

Hiccups' mother returns after her original appearance in the earlier trailer, but this time she reunites with his father in an emotional moment that will tug on your heartstrings. And there's a lot more of those beautiful flying/falling sequences starring Hiccup and Toothless, who just keeps getting more and more adorable. God, I just want a pet dragon. The trailer also features a few more glimpses of the dragon utopia, introduced in the previous trailer, and of the film's huge battle sequence as Hiccup faces off against a new foe. If you were fearing that How To Train Your Dragon 2 would be a carbon-copy of the original, fear no longer — DreamWorks has cooked up something equally amazing and unique here that will kick-off the summer blockbuster season.

We're just going to go ahead and say it — Dragons are so having their moment right now.